One of my minor roadblocks just resolved itself, much to my surprise.

I had the voltage regulator removed from the alternator; it wasn't one of the adjustable kind, and I was trying to come up with a way to lie to the thing's inputs so it would tell the alternator to put out higher voltage. I cleaned the contacts, and reinstalled it so I could check voltage at a few more places with the multimeter. After running the motor for a minute with a drill bit across the brushes (anyone that has taken apart an alternator before knows this is a rookie move,) I found that the bus was pushing 14.9 volts! I verified with my multimeter... problem solved! I'm guessing that cleaning up the corroded contacts was all it needed. 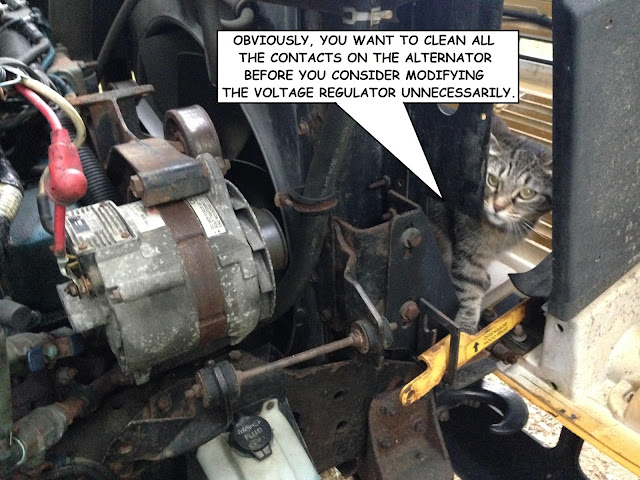 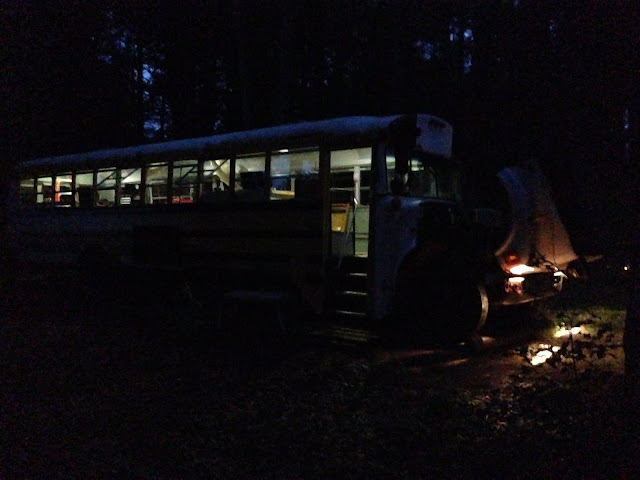 I let the bus run for about an hour this morning; it continued charging at 14.8v, and after I shut it down the voltage held strong at 12.8v. I couldn't ask for anything more. Below is the voltage screen on the Trimetric, with the approximate charges a series-parallel bank of Trojan T105's will have at corresponding static voltages scrawled on the window. Below 12.1v I could damage the deep-cycle batteries, so 50% is a notional "dead." I'd like to wire the bus so that it cranks over automatically at 60% capacity remaining. 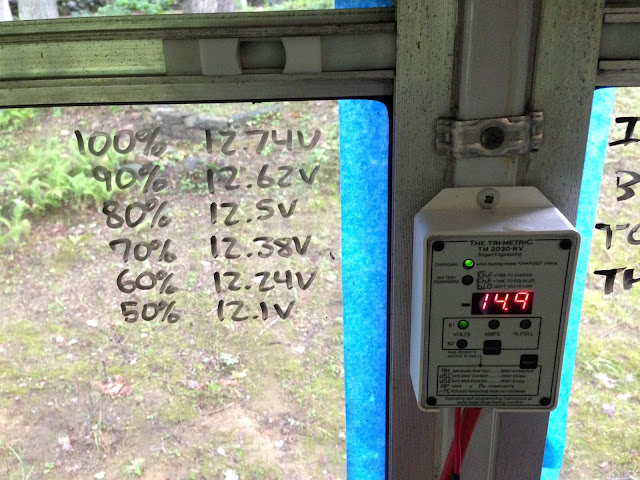 This is the percent charged screen on the Trimetric; my bank is charged to 100%! 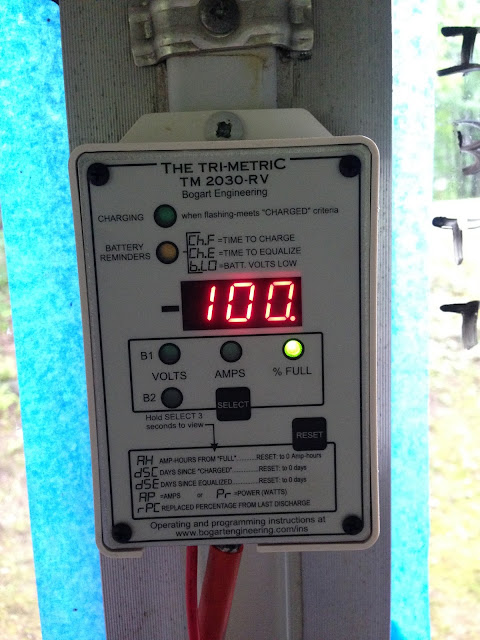 On a slightly random aside, I recommend Tractor Supply for hardware purchases. I've been trying to build up my "bench stock" of hardware, so that I might have something I need on-hand instead of having to drive out to get a new one. On the bus I've been using a lot of 1/4"-20 hardware to keep things secured. Below is a pound of 1/4" and 5/16" nuts and bolts, which sell for $1.99/lb at Tractor Supply. If you go to Lowes or the Depot or Ace you're paying that for a package of three or four of these bolts.

I also save all the hardware I find while taking things apart, and throw it in the bins I showed you all a few weeks ago, by size and thread. 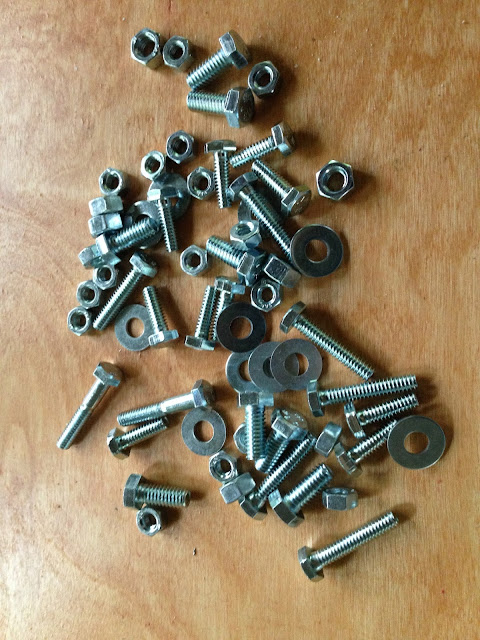 With my battery bank charged, and extension cords coiled up and put away, I broke out a pencil and paper, and my drill with a hole-saw. I measured out and marked the counter where the sink would fit. With the drill plugged into the inverter, and the inverter drawing off the battery bank, I drilled the corners of the sink's hole. I had the battery monitor set to display Amps, and out of an over-abundance of caution I tried not to exceed 30 amps while cutting. The monitor is looking at the input amps to the inverter. The 120v output leg I'm wired off of is rated to 30 amps, and I imagine the inverter would draw more amps to make the 30 amps it could produce safely, but I took it easy anyway. I balanced tool speed and pressure applied into the work to keep it around 25 amps. 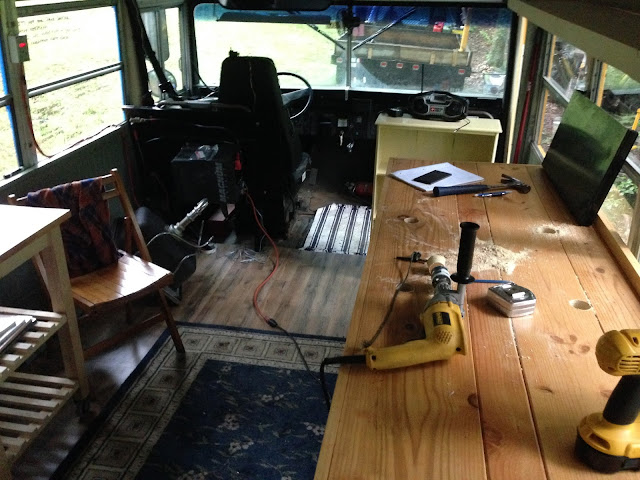 I don't know if it's because I'm running on a modified sine wave, or if the inverter needs a small load before it "kicks in," but power tools don't turn slowly when you gently depress the trigger... it's more like an air tool where you have to give it an almost full squeeze to get it going, then back off to a lower RPM. Otherwise both the drill and the router ran smoothly. Nothing got hot, nothing was smoking, and I didn't burn the bus down. Success! 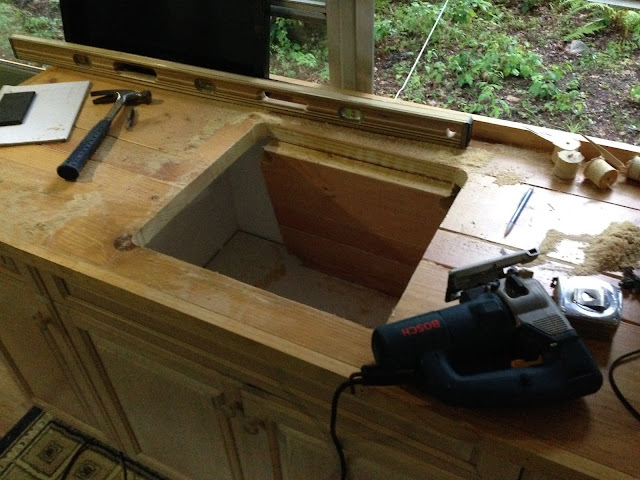 My surplus sink, installed solely on bus power. All told, this project used a mere 5.5 amp-hours of the 450 amp-hours I have available. 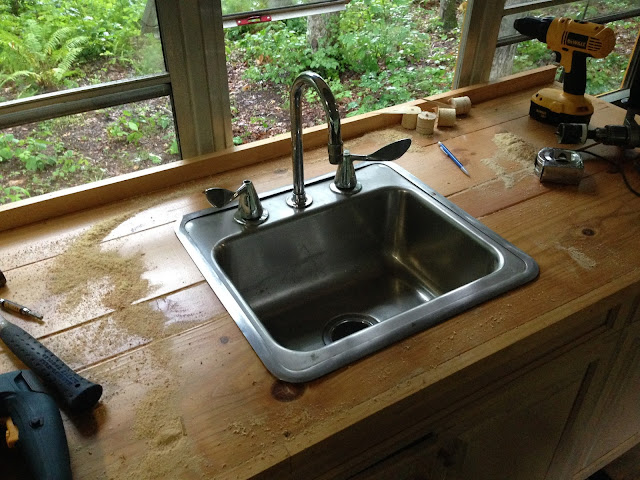