Getting home from work on Day 10072, I popped a hatch and started painting the roof with Behr semi-gloss Anonymous... also known as "light gray." 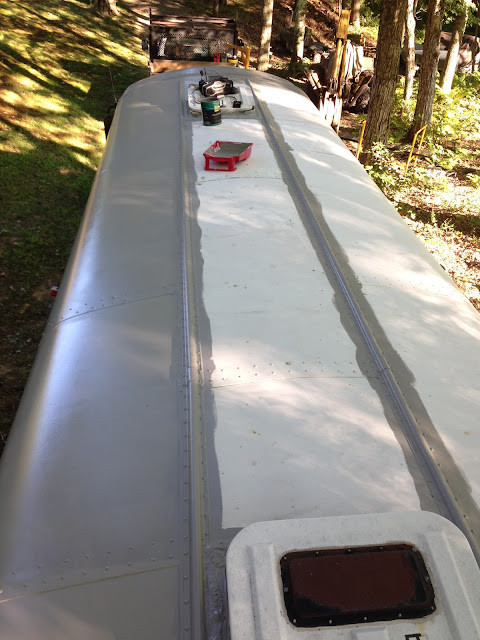 I usually have music playing while I work, otherwise I tend to wander off and get distracted. I bought this little Porter Cable radio to hold me over while my DeWalt "jobsite" radio was down in Guatemala with the unit. I've had that DeWalt radio for nearly ten years now; it has been through dust storms and mortar attacks in Southern Iraq, been frozen in New Brunswick, endured rocket attacks in Jalalabad, and through the jungles and around the volcanoes of Guatemala, twice. It has more flight time than many in the unit. It has been on more C-5 flights than me. Other than a loose tuner knob, it works perfectly. This little Porter Cable radio lasted about three months before the power cord broke, at the back of the converter. In the US. On a bus. With no one shooting at it. Real nice, Porter Cable.

I took my alligator-clip test leads and ran it off of a DeWalt battery; I fixed it! 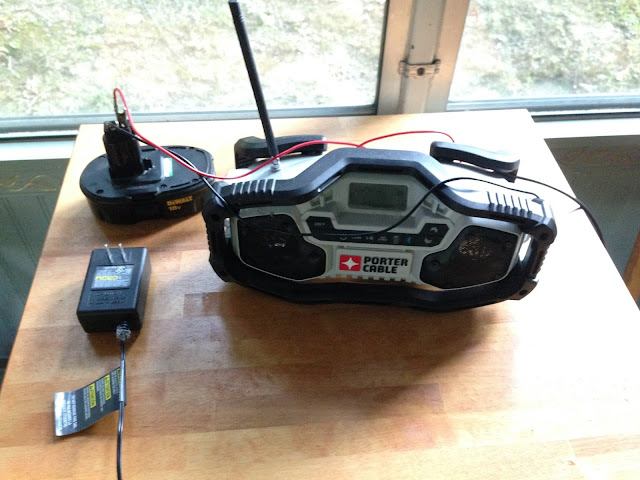 This morning I went right to work mounting one of the water barrels. Originally I had planned on mounting all three tanks today, but since I'm making this up as I go I elected to just mount a single tank to work the bugs out. I laid out a canvas under the bus so I wouldn't be rolling around in the dirt.

I'd like to reiterate that all the power tools you see in photos are running off the inverter, which draws power from the battery bank, which is charged by an alternator, driven by a diesel engine. Off-grid machine shop. Diesel-powered self-repairing school bus. 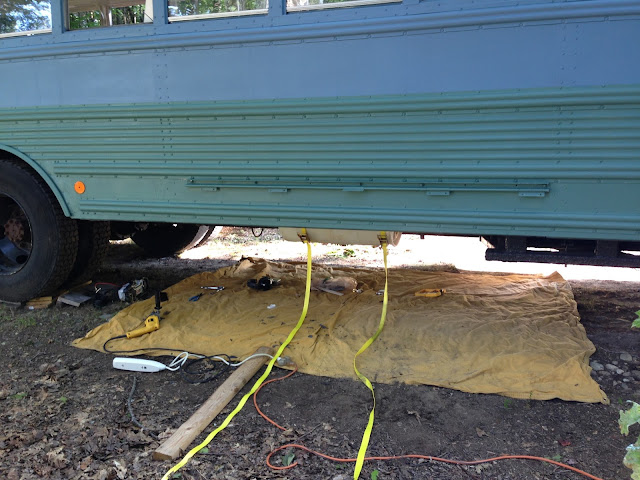 I drilled some holes through the bottom of the "I-beams" made at the unions of the floor segments, and installed two tie-down fittings. The ratchet straps came from US Cargo Control, which is my go-to site for anything needed to make something stop moving. I debated some additional shoring for the tank, but rubbing/vibration aren't going to be a big concern of mine using this as a parked camper. If I was building a rig for a highway tour of North America I probably would have built a nice frame and secured it a little more snugly. 2000lbs of restraint for a 240lb load (30 gal * 8 lbs/gal water) should be fine. 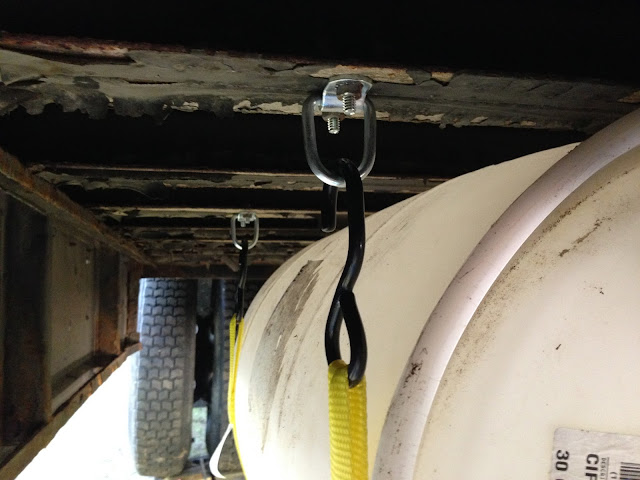 I could still smell the cleaning agent that had been in this triple-rinsed food-grade barrel, so I gave it another triple-rinse with water and a generous helping of Dawn dishsoap, and let it stew overnight. Now I just smell dishsoap. I'm looking into getting the water that comes out of this tested before I drink it. Not only would bad water destroy my kidneys, but it really throws off the taste of coffee.

I took an early morning trip to Lowes to buy all the fittings I thought I needed to mate a 30-gal barrel to a 12v RV pump and a kitchen sink. I saved a lot of time, money and frustration bringing my cheap plastic vernier calipers (seriously, one of my favorite tools) and a notebook into the store with me, and measuring everything. I put in a stopcock and an external spigot, in addition to the line running to the pump. On the top of the barrel I installed a fill port with a garden hose attachment.

Originally I planned on doing the whole thing in PEX with all the PEX fittings and PEX crimps. Do you know how expensive all of that PEX stuff is? The normal, US-made pipe clamps in the picture below are an illustration of how I didn't spend $40 for a PEX crimping tool that's only good for one thing, and a $10 bag of 10 crimps. 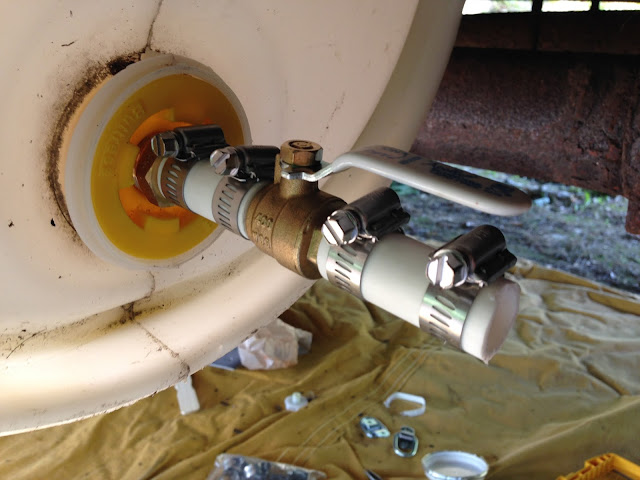 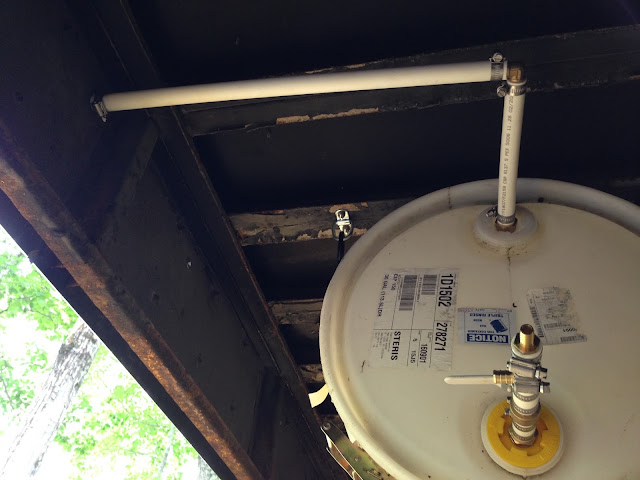 There was a lot of unknowns with the water pump. Would it pump air? How much could it suction? How high could it pull water up a line? Using two bottles, one empty and one full of water,  and two 12v batteries, I conducted many trials. This little 1 gal/min pump is quite capable. 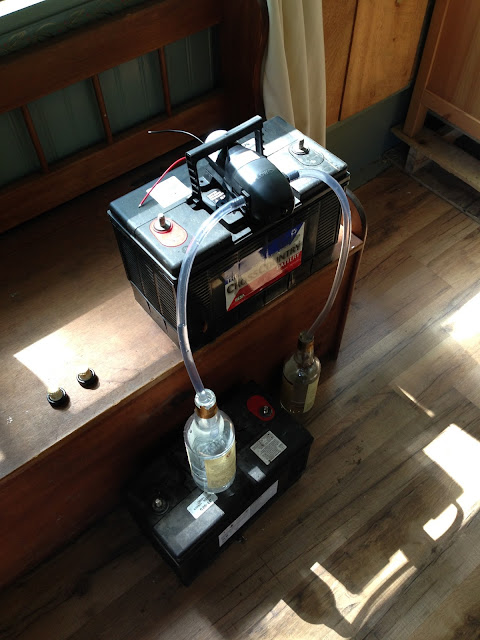 Tell NASA, I have evidence of running water! How, you may ask, do I get water pressure? Well, I simply flick the toggle switch to engage the water pump, and open the sink's hot water valve. 30 gallons of water and a 1gpm pump gives me about 30 minutes of running water in the bus.

I didn't get a picture of the underside, but the water pump is mounted in the cabinet base. It draws water through a hole in the floor to the water tank. The switch receives power from the battery bank. 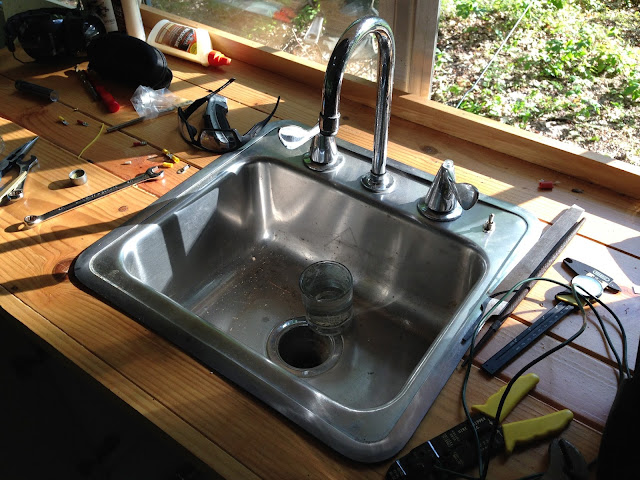 My water project mostly complete (I don't have the pieces I need to make the drain) I continued painting. I hit the caution light corners, hood and the window gutters with blue. I think it really cleaned up the bus, and made it look quite nice. Glad I painted over the black parts. 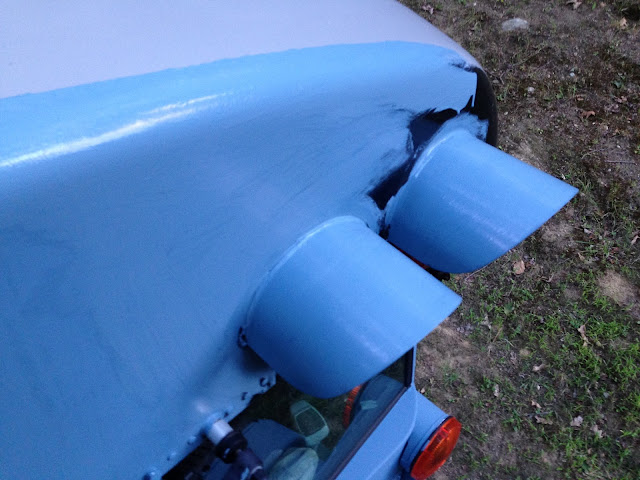 That thin white line is where one of the double-door hinges was bolted on the side. I removed it so I could have a spot for my water fill spigot. I'll touch that up with some green tomorrow.

My "yard" is a mess but I'm out of energy. Tomorrow I'll work the last few kinks out of the water system, and touch up paint on the exterior. I started priming the cockpit; it will look way better painted. 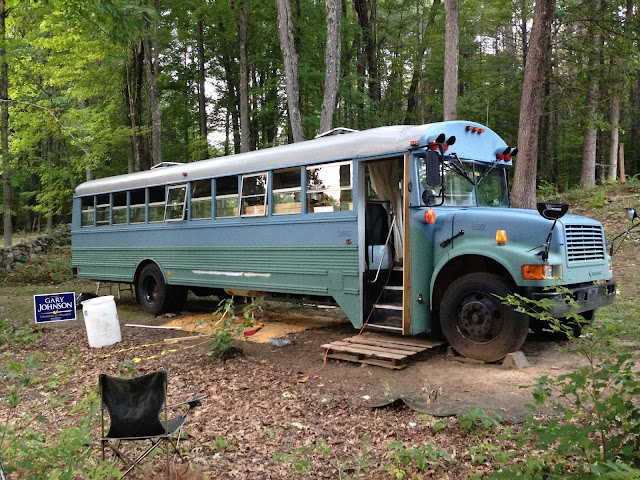