The bus will soon be finished. I'm down to the finishing touches on the water drainage system, dc-side electrical system, and the front door.

Other ongoing projects outside the bus are the land search, and the backhoe rebuild. The backhoe, a 50 year old machine, hasn't had a thorough servicing at least since I bought it in April of 2014. I replaced the seals in the backhoe's control valves last summer, but the slightly corroded spools have destroyed another set of packings, and it is leaking again (part of my environmentally friendly campaign of returning hydraulic oil to the ground where it came from.) My plan to colonize leans heavily on this Swiss Army Knife being in good working order, and it really needs some attention before I move out.

As mentioned a few weeks ago, I found a compatible backhoe tower for sale on craigslist, and plan on stripping my old one of all the good parts, moving them to the new tower, and replacing everything worn out as I go. I started this undertaking on Day 10081.

First off, I'd have to get the backhoe in a position where I can safely disassemble it. The Case turned over slowly, and a quick check of the battery revealed it was mostly dead... 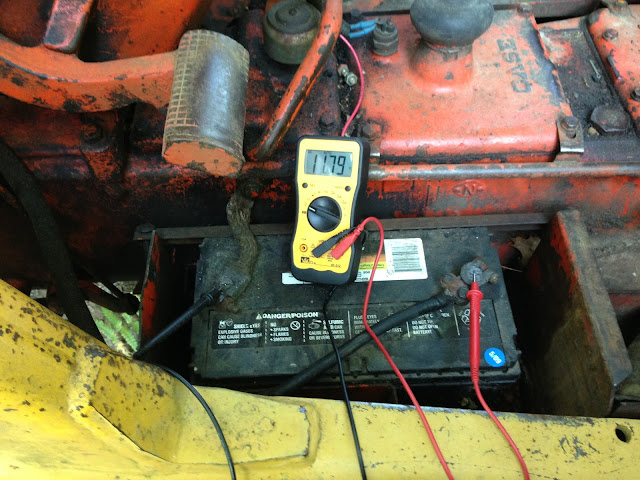 I jumped it off the F350, and used my dad's tractor to bring the new tower next to the tractor. Once I got it running, I laid out the boom, dipper and bucket on the ground, and gently set the stabilizers to take the weight of the backhoe. The backhoe frame is held onto the tractor by four pins; two that come out on top, and two that aren't removed, which rest in a cradle on bottom. With some assistance from a crowbar, and by gently moving the stabilizers, I found the sweet spot and removed the top two pins. 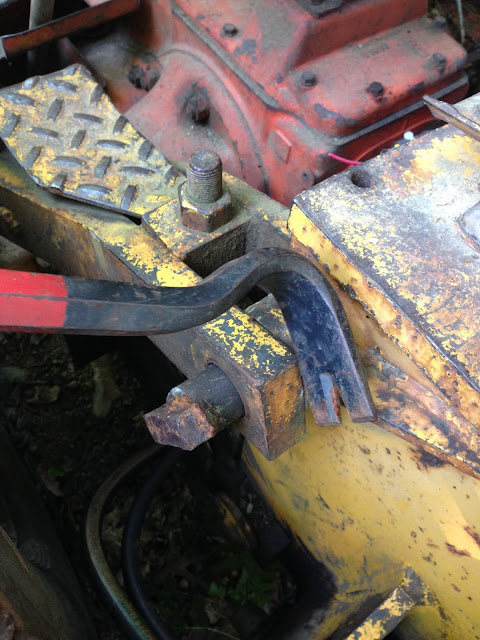 I had thoroughly coated the pins with anti-seize compound when I installed them last year, which paid off with their easy removal. 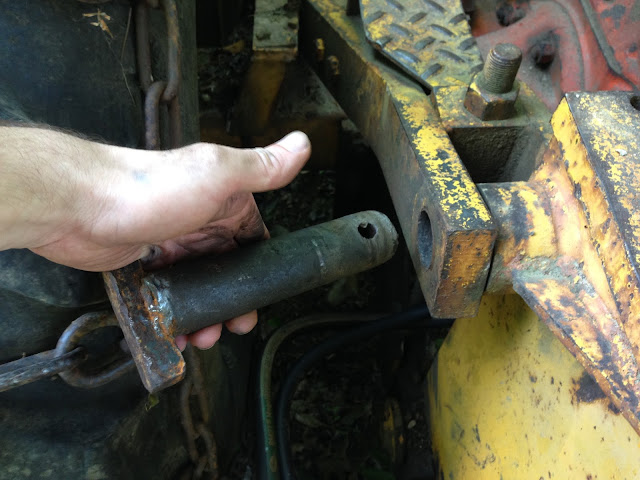 With both pins out, I raised the backhoe off the tractor's frame with the stabilizers, and set it down on jacks and blocks. Hydraulic fluid comes through large pressure and return lines, which need to be disconnected from the backhoe and reconnected to the tractor to keep the system open. With these lines out of the way, I drove the tractor away from the hoe. I'd like to take advantage of the tractor being that much smaller and more maneuverable and take it into the barn to change out all the fluids and filters, too. 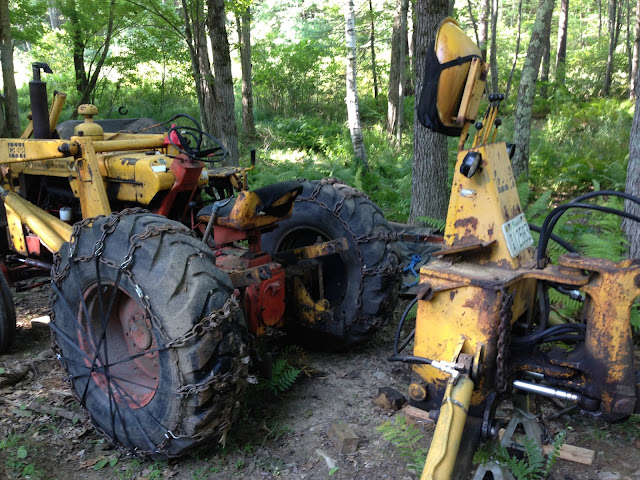 That done, I made some French toast and coffee! The Partners propane cook-stove, made in Idaho, does a fantastic job; it is light, boils water quickly, and won't blow out in a breeze. 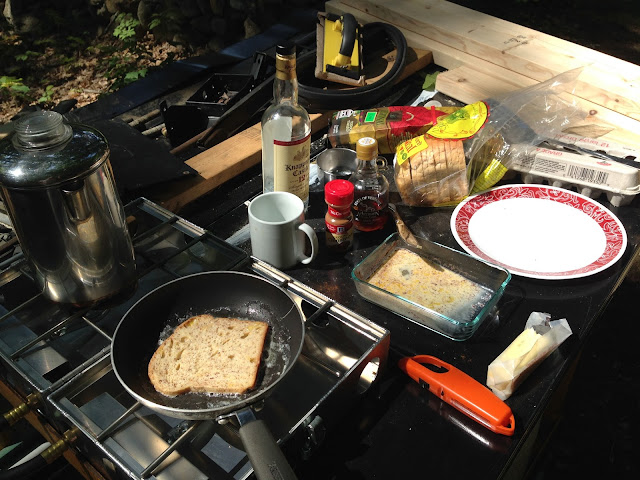 I purchased some 3/16" oak plywood for the front door, which will be the lip the rubber window frames will be held in by. It took some work, but I was able to get all the windows worked onto the plywood. 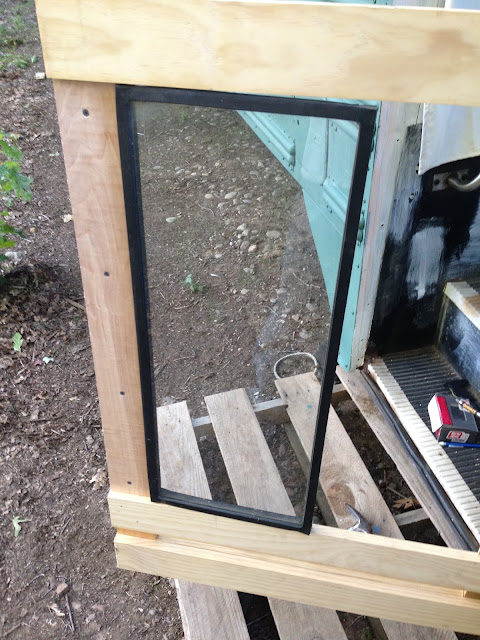 A piece of aluminum strip keeps the windows snugly locked into the door frame. 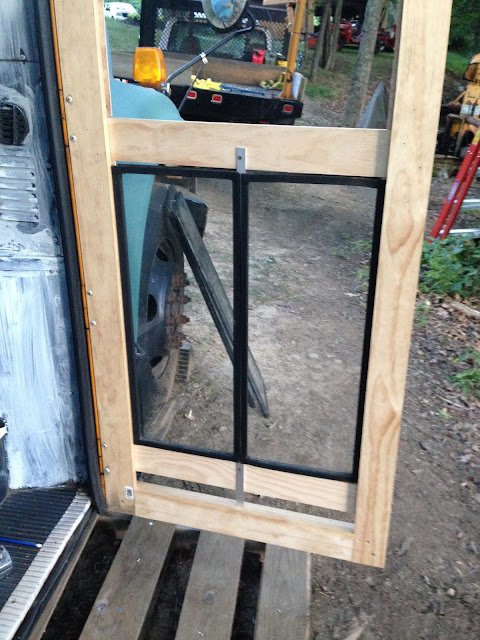 All together and ready for trimming! The plywood and aluminum do an excellent job keeping the windows secure; they don't move a bit when the door is shaken. 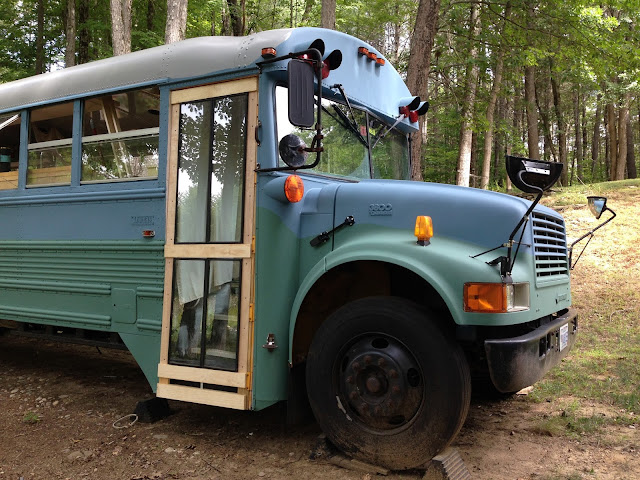 As I type, I have the bus running to recharge the battery bank. I took the next few days off from work to get it finished, which is my version of a vacation.
Posted by Aaron at August 31, 2016