Over the past week I've closed a lot of loops and finished a bunch of small projects. I'm running out of things to do on the bus! Last week I spent a few nights sleeping in it, and found it to be very comfortable. Most of Day 10109 was spent in the bus, cooking reading and doodling. Good lounge day.

I'm skilled at procrastinating something I don't want to do, and accomplishing a lot in other areas. Lately I've been putting off the backhoe rebuild (a greasy, knuckle-busting job) in favor of cleaning up the barn before winter and getting rid of things I don't use or need. A few large bins went to the Salvation Army.

A quick after-work project was replacing the worn-out batteries on the F350 with the bus's old batteries, which was brought on by the truck not having enough power to get started the other day. I had intended to replace the old beaten terminals on the truck's battery cables, but the project proved to be quite daunting, and I elected to not fix what wasn't broken. With the assistance of a set of channel-locks used as a hammer, I got the beaten old terminal ends over the new battery lugs. Whatever. 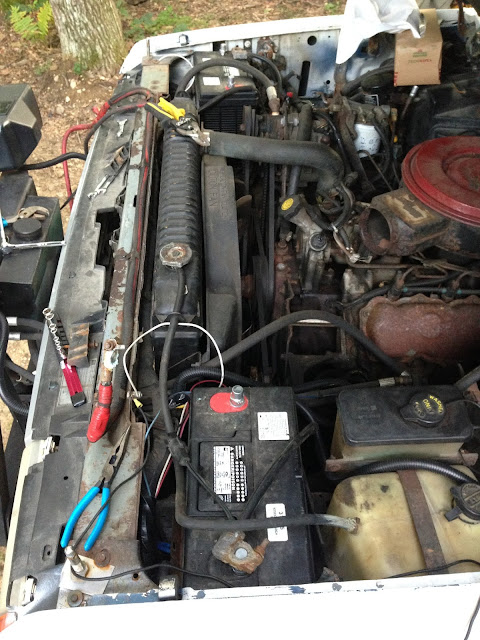 She lives! The wire harnesses were neatened up as well as I could; they're a mess from the cab swap. I also noted the starter solenoid is a massive blob of rust, and imagine that could be the source of it not starting from time to time. I'll replace that when I find some motivation. Fun fact; the new batteries are a little taller, and now the hood doesn't close all the way! I can still get one dragster pin's hair-pin in. Good enough. 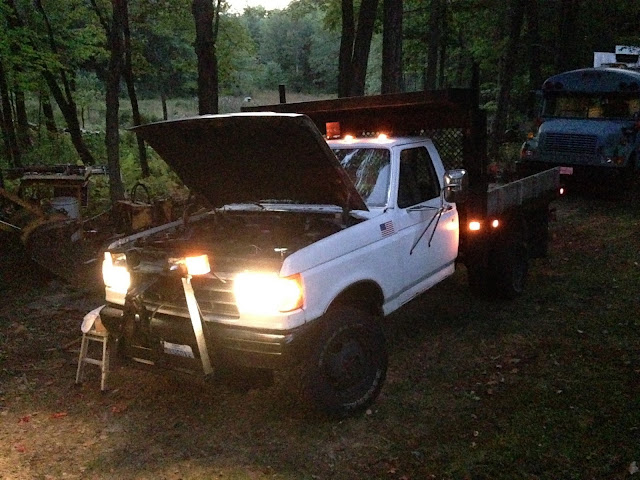 Meanwhile, in the bus, I neatened up some of the DC accessory connections... 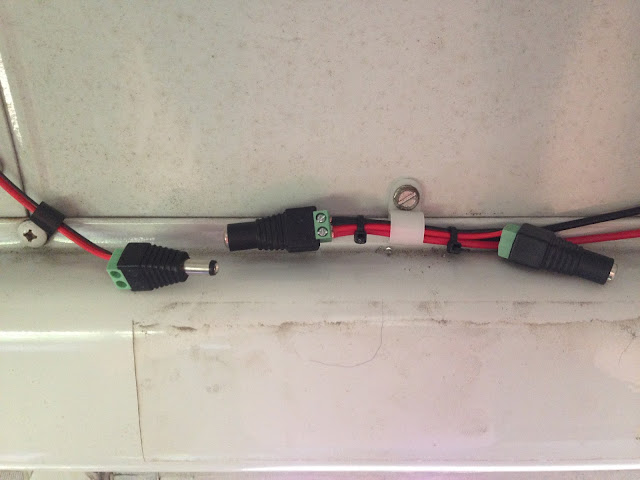 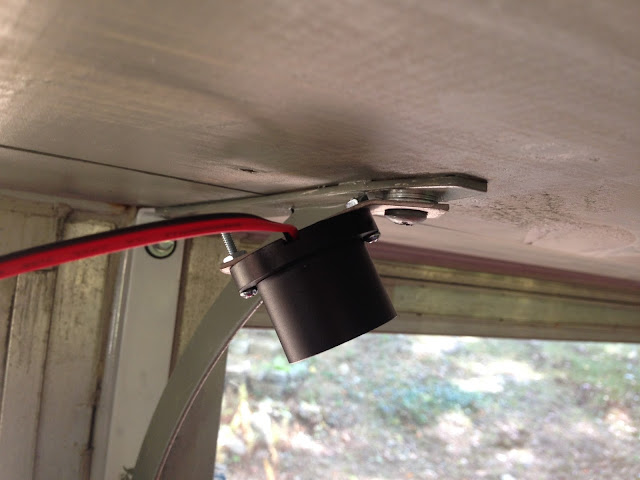 ... and installed the trim piece I had removed from the fireplace in front of the cabinets. 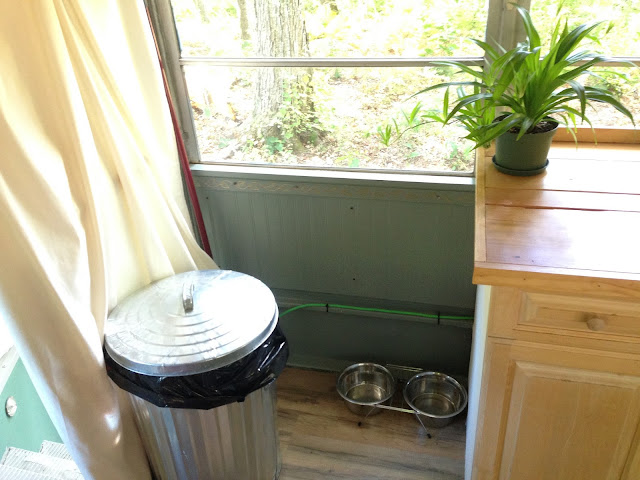 Saturday I cut some scrap siding into little triangles, and used some aluminum bar stock to make much needed book-ends. 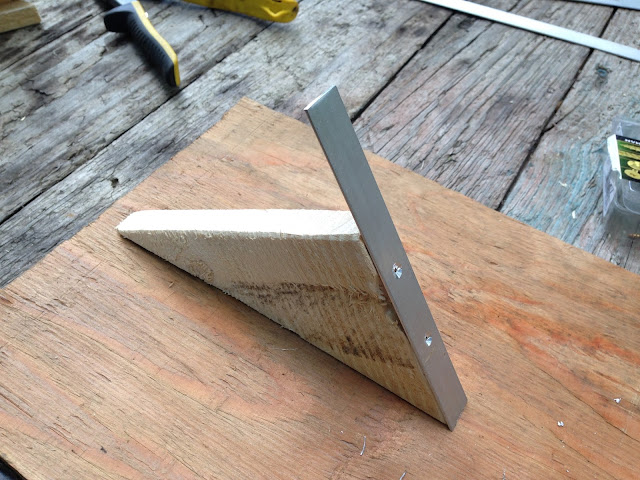 I painted the bookends with leftover bus paint as little mountains. Now my small bus book collection is a miniature mountain range. 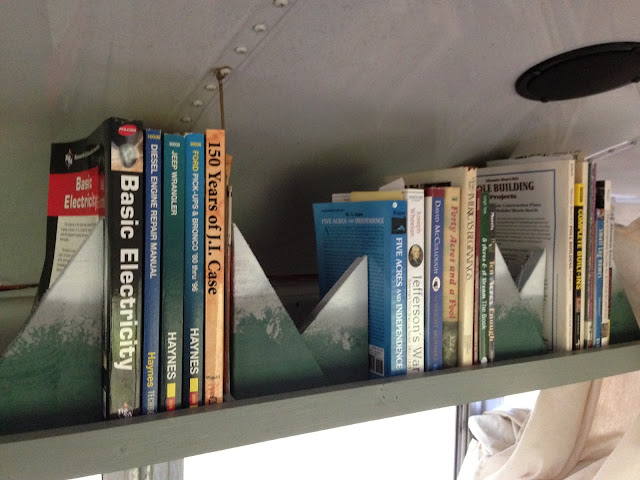 I took a piece of Maple I had purchased a few weeks ago, and made a coat rack with a bunch of cheap cast-off (i.e. they still do their job but they aren't as pretty) Shaker pegs. The pegboard was installed in the mudroom; also known as "the staircase" or "the area immediately to the right of the driver's seat," if you want to get technical. 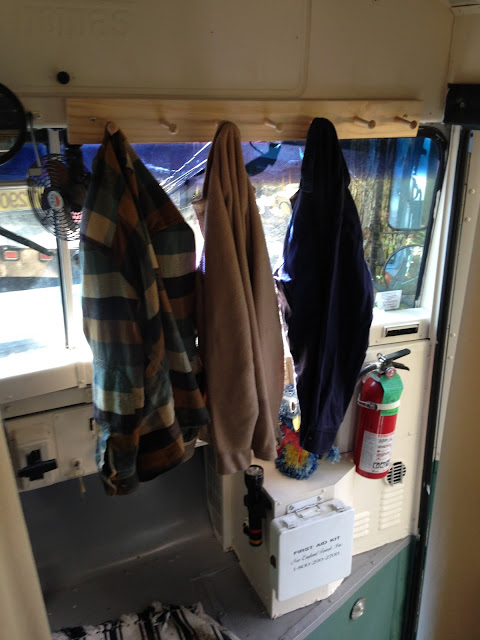 Break for lunch; rice and peas on the wood-stove, with some re-heated percolated coffee. Mmm. 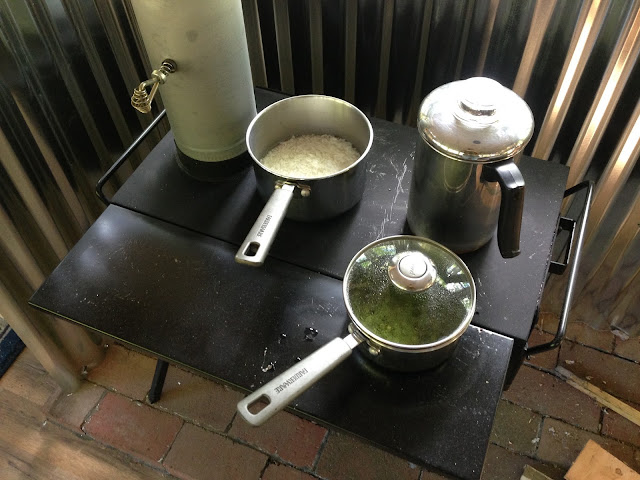 Then on Day 10110, I took on the metal panel for the chimney's window. This piece will serve several purposes; it will be a structural support to the chimney hanging out the window, keep the rain and snow from getting in, and keep the warm air from getting out. I also wanted to make it in such a way that removing it wouldn't be a nightmare (so nothing too permanent.) My starting piece was a steel shelf, acquired surplus from a certain government building's scrap metal bin. The shelf had 3/4" tabs that I wanted to retain, as I could inset the piece into the window's recess in the bus's sheet-metal. 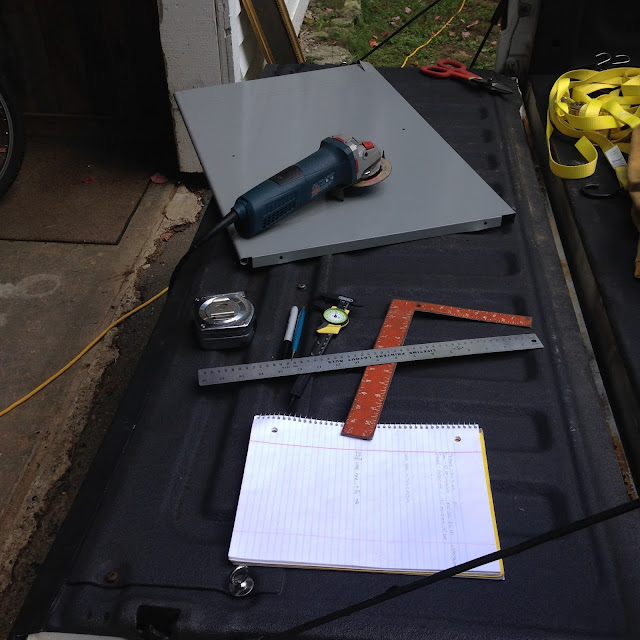 After some measuring, guesstimating and eyeballing, I drew out what I needed on the piece, then cut it to shape with the angle grinder. See the new 3/4" tab? 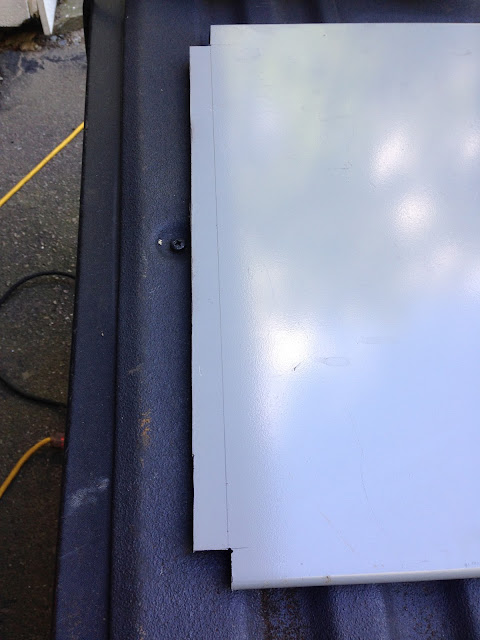 Next I bent my new 3/4" tab up. At work we have a large tool to do this quickly. At home I have vise-grips and patience. 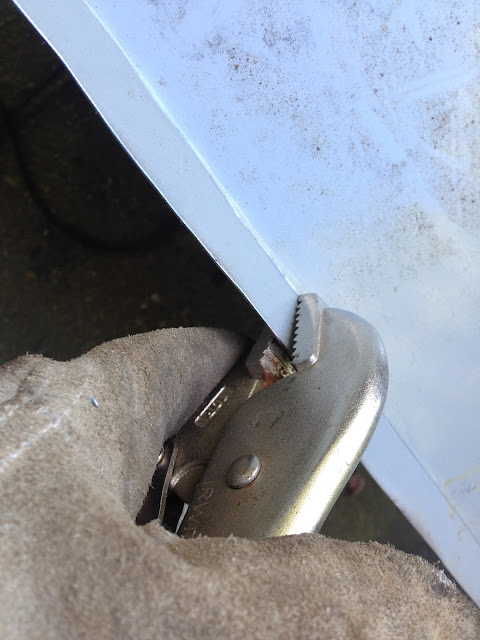 My piece cut to shape, I measured the top, bottom, left and right limits of where the stovepipe wanted to sit, coming out the window. The pipe has a five inch diameter, but climbs out the window at an angle, so the up-down measurement was closer to six inches. I used the four inch hole saw to cut out the center, then finagled the tin snips into the hole to cut twelve tabs all the way around. 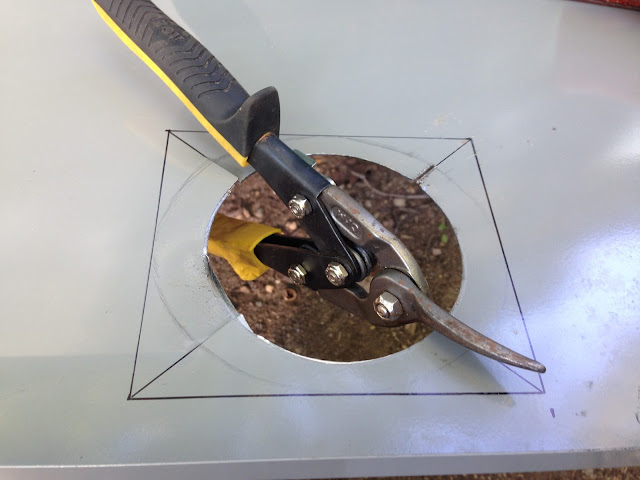 In a technique that I unabashedly stole from the Splitting Elm blog, I bent the tabs in and out, mounted the panel into the window-frame, then screwed the pipe into the hole. I like how they did this. I got lucky, here; it fit without much adjustment. 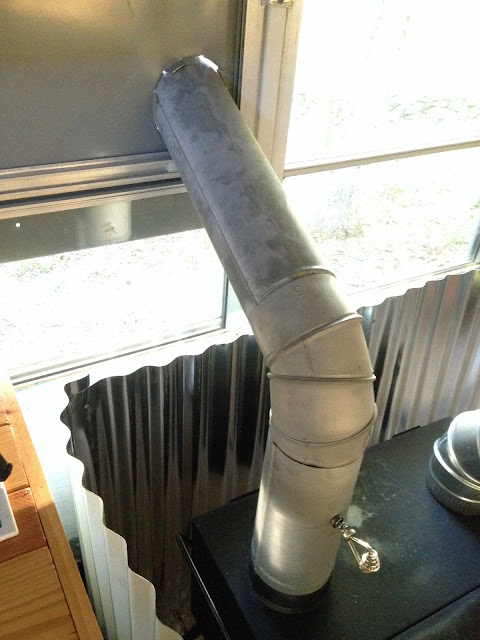 Finally, to literally top it all off, I found a sharp looking cap on eBay, made in Maine, USA. It arrived yesterday, and I installed it after work today. Four feet of stovepipe past the exterior elbow gives me enough draft that I'm not filling the cabin with smoke when I start a fire, AND no longer setting off my smoke detector, which seems to be a slightly louder version of the INCOMING alarm at Jalalabad. 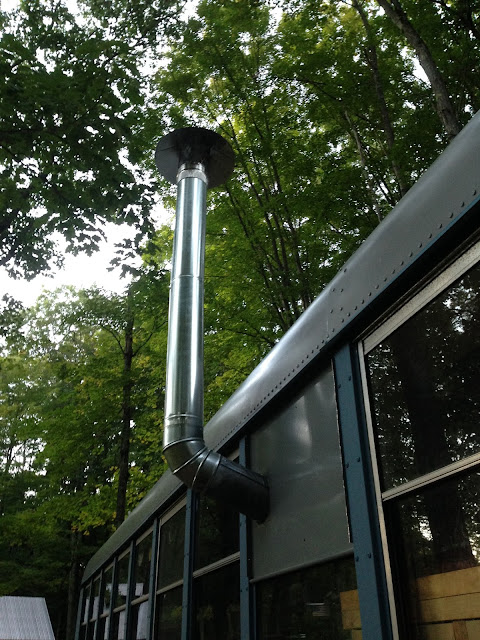 I'm really happy with how this came out. What used to be an oddly painted bus with furniture is now clearly a small home.