As I right this, I find the bus is uncomfortably warm... because it now has wood heat.

One of the frequent comments I heard at drill last weekend was "Wow, I couldn't do this..." I found that statement to be the most disturbing... even more disturbing then all the references about me dying in the bus like Alexander Supertramp after eating wild potato roots. I consider my audience to be a bunch of creative problem-solvers, and that's all you need to know to do something like this.

When I hear this disturbing phrase, it makes me think the person isn't confident in their own math, carpentry or electrical skills, or their ability to learn new things. I've used high school physics that I know I had learned at some point, but had neglected to maintain (14 year old Aaron, science geek and Trekkie, would be ashamed that this is what he had become) and had to teach myself. Mainly electricity, but hooking up my water pump wasn't exactly intuitive, either. I have three primary sources for learning about these kinds of things; my friends, the internet/books, and the scientific method. Friends are the easiest resource to utilize with tough problems. The internet will usually yield an answer after a few Google searches and YouTube videos. Trial and error is slow but effective; especially if you take notes.

Given my profession, I feel pretty confident in the use of hand and power tools, which I think many are embarrassed to say they aren't familiar with. Like many other things tools are best learned by jumping in and using them. I have purchased tools which I had no idea how to use until I screwed it up a few times and talked to friends (the backhoe and welder comes to mind.) I still screw things up using the wrong tool, and I'm a "professional." I know I can learn it.

Another huge help to me comes from planning. I usually have an idea, and mull it over for days or weeks before implementing it. I think about how my new idea will work with other things that are already on the bus, or with other things I'm planning. Most of the serious ideas end up on paper in sketches, which helps me visualize the idea (a skill gleaned from my Dad.) Then I start acquiring pieces I know I'll need. When time, resources and motivation come together, I get to work.

The difficulty, and I may sound like Donald Rumsfield, is not knowing what you don't know. You find out what you were missing early in projects, and I always feel like it was something obvious that I had overlooked in the planning. Sometimes this costs money, or time, and sometimes you surprise yourself with your own ingenuity when you find a creative solution to a problem. When I realize what it is that I didn't know I needed, I start making lists (a skill from my Mum) so that when I go on a parts run I can get everything I need at once (saving time, and therefore preventing frustration.)

To those reading that have doubts about their ability to do "this," be it a bus-cabin or any other minor engineering feat, know that you absolutely can. All you need is an idea and a willingness to learn. I recommend patience and a good set of tools, as well, but it's not necessary.

But I digress; that's enough mechanic zen philosophy for one night.

The wood stove arrived on day 10097; and after assembling it in the barn and admiring the craftsmanship during the work week, I finally got to use it Saturday morning. Included with the stove, which was designed for heating canvas tents, was a three page packet describing safe use. Two notes stuck out; run it outside first to finish curing the paint, and cook bacon and eggs on it to learn how to use it. Not having any bacon on hand I tried eggs, toast and coffee. The results were highly pinterest-able! 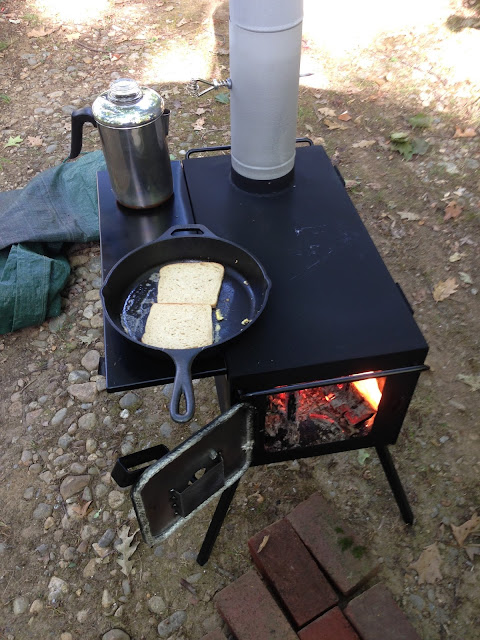 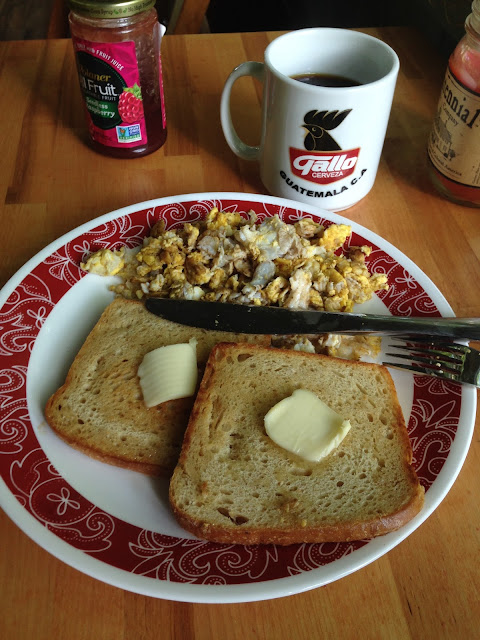 The Three Dog is easy to use, and baffled so that the hottest cook surface is about 8" in front of the chimney stack. The shelf on the side is how you can regulate temperature of what you're cooking. It was a brisk morning, and the little Three Dog put out enough heat that a T-shirt was comfortable when sitting around it.

My dad walked by, as I was enjoying a cup of coffee with Zeke, and commented that I've spent too much time in Afghanistan if I think things like this are enjoyable. He said this with a steel digging bar in hand, walking out back to build a stone wall... for fun. Clearly the apple doesn't fall far from the tree. We had coffee, and I continued brushing off a pile of bricks we've had lying around, to use for my fireplace. 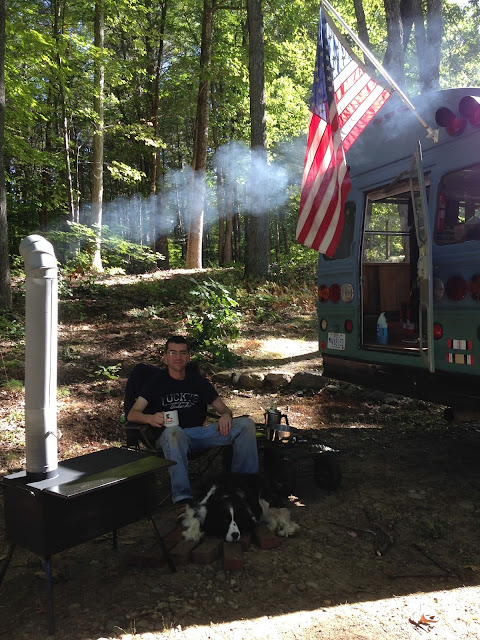 I put the stove in idle to see how long my bed of coals would last, and started laying out the bricks on the floor. I removed the trim panel aft of the kitchen, to be reinstalled at a later date on the other end. At first I was concerned about the weight of the bricks on the floor (48 bricks at about 5 lbs each is ~240 lbs, plus a 60 lb stove) but then I thought about how big some kids are these days, and how this area was about the size of a bench seat, and the bus has probably had a pair of husky 5th graders sitting together in this spot before. 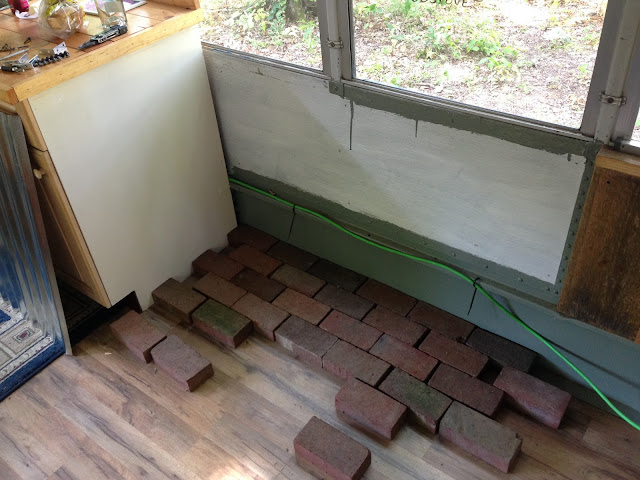 The futon is Ezekiel's spot of choice, by the way. 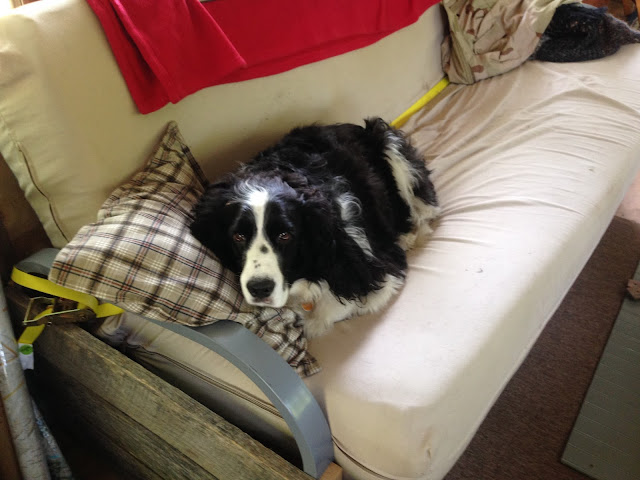 My bricks arranged, I knew I needed eight half pieces to round out my fireplace. I had no idea how to cut or break or split a brick, so I turned to the internet. Quick aside; everything looks easier on YouTube. People don't post a 20 minute video of them struggling to do something they aren't confident about; most videos are a few minutes, from someone who has mastered the task at hand, and make it look super easy! Just like brick-cutting. "It's easy!" said the notional YouTube guy "just score the brick with a chisel, set this special hammer on it like so, and two firm taps, voila, a perfectly cut brick!"

Well my bricks took about a dozen firm taps, and a few came apart like the one below.

Another quick sidenote, I'm pretty sure the chisel below was designed for splitting bricks. When I was a kid, playing in the sandbox, this chisel was frequently taken from my dad's toolbox for constructing the perfect roads for my collection of Matchbox cars. I'm still more comfortable making dirt highways for Matchboxes than splitting bricks with it. 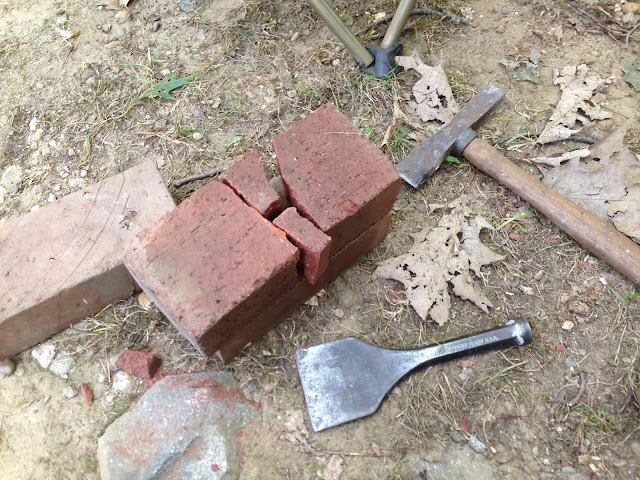 I used a dab of a very strong adhesive... that I acquired expired... from military surplus... to secure each brick to the floor. 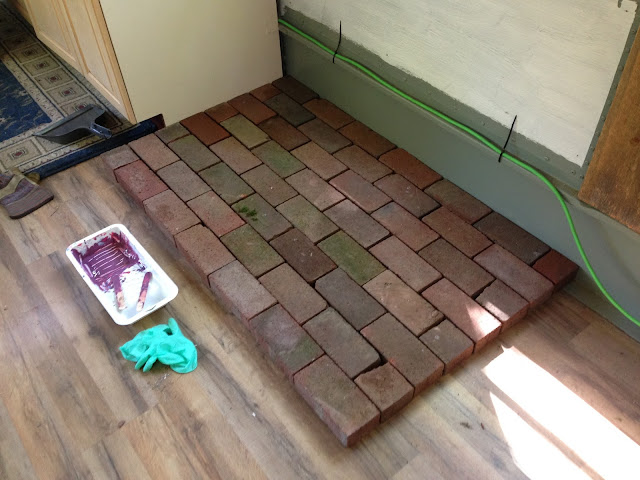 Then with a tube of mortar repair RTV loaded in a glue-gun, I went through and sealed the area between the bricks. I didn't use real mortar because I didn't think it would hold up to the frame flexing during a drive. The RTV I used was very thick, and could be carved reasonably well, so I went through after with a tongue depressor / popsicle stick to make it look more like mortar. 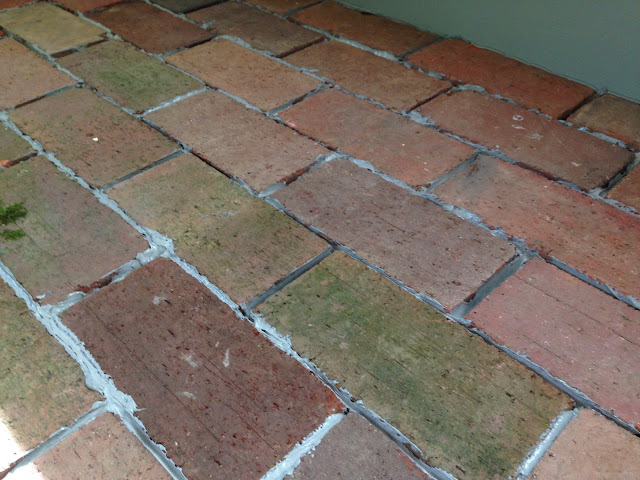 It still looked artificial to me, though, being one even color with no texture, so I got a few scoops of mica-rich dirt from the driveway and brushed it in. Much better. Now it looks like an original 18th century fireplace in a 2001 International school bus... just like in colonial times. 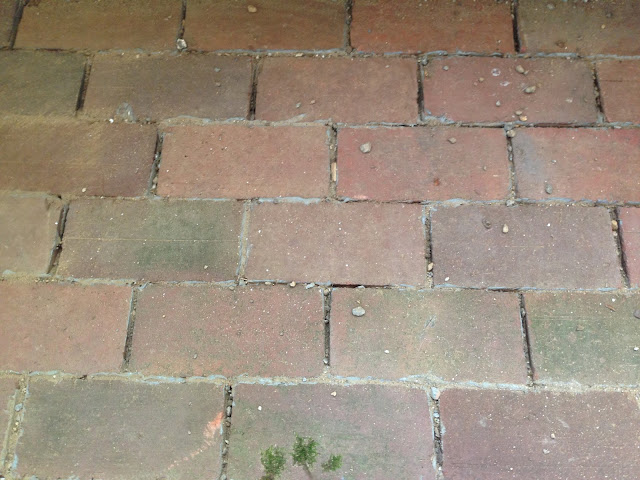 Onto the next project; the heat shield. I cut an 8' piece into three relatively even chunks using tin snips, and wearing thick leather gloves. I managed to not cut myself! 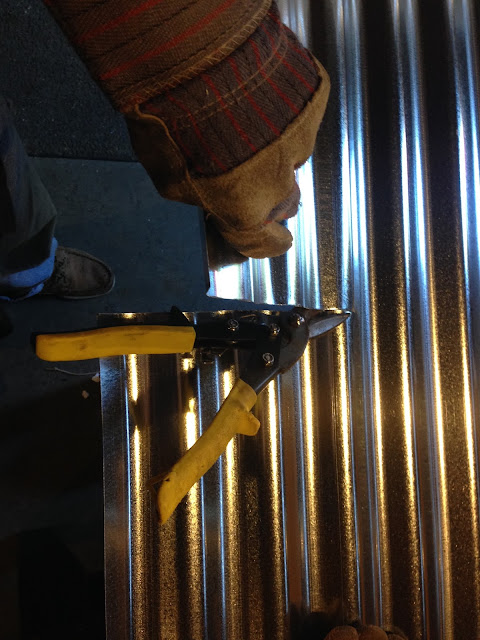 I consulted my local fire marshal, on break from moving large rocks around the yard for fun, and discussed options for mounting a piece of Guatemala-roofing sheet-metal to protect the bus from the wood stove. Often when I hit a roadblock, where I can't continue forward with a project until I figure out some sort of solution, I will stare at it, google it, and play around with it until I get an idea or a solution appears from the ether. 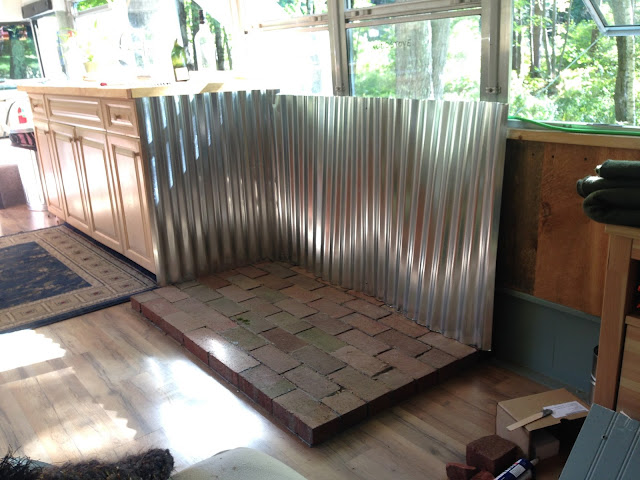 My thoughts tend to wander. How will I hang this off the side, to create a few inch wide air barrier? I don't have enough little brackets on hand. Also, metal brackets will transfer the heat the panel absorbs into whatever I mount it to. I need an insulator, something glass or ceramic. Can I stick a brick back there? It will flop over. Would the hardware store have any kind of high heat insulating mounts? I don't know what those would be, and it sounds expensive...

But wait! I don't need to mount it! It can just sit on the bricks... if I can figure out how to make it not flop over... like making a frame. What do I have for scrap metal? The bus doors.

The solution now apparent after some deliberation, I plugged in the angle grinder. 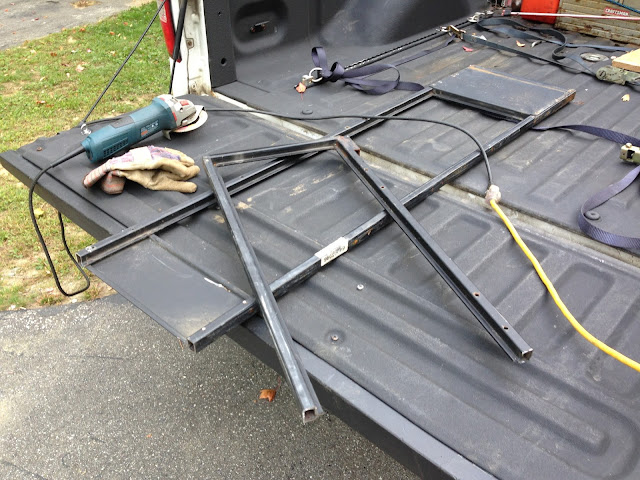 I cut the pieces to size, and welded them together with some 6011 rod... 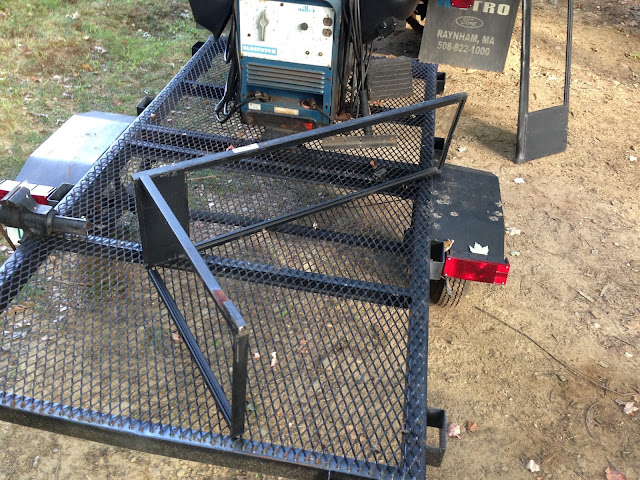 ... then I nestled my sheet metal heat shield into the frame... 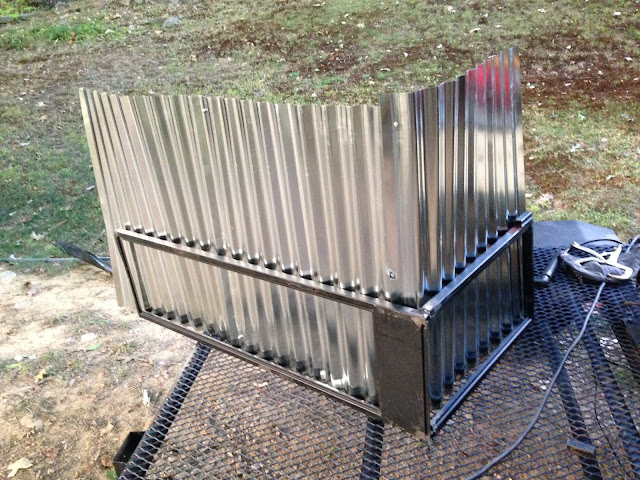 ... and secured it with some sheet-metal screws. You may be thinking; "gee Aaron, drilling holes, then putting screws in is a lot of work, and you already have the welder going, can't you just do a bunch of spot welds?"

Well, I thought that too, dear reader. Unfortunately 3/32" 6011 at 60 amps blasts through 0.020" sheetmetal like an RPG. One corner of the heat shield now has authentic battle damage. 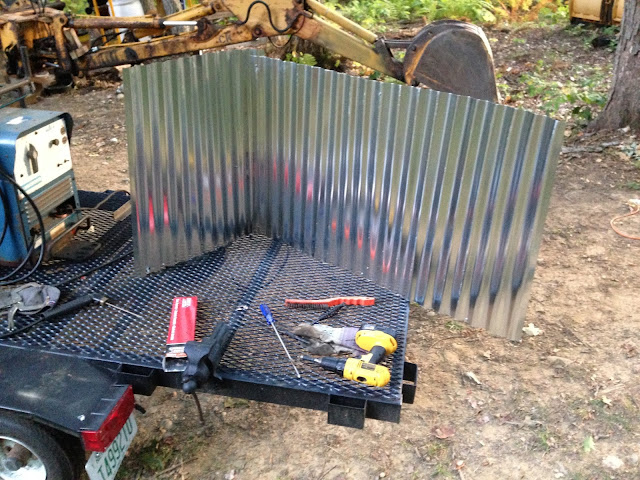 My rigid-frame heat-shield now installed in the fireplace, I brought the wood stove in and jury-rigged the chimney. 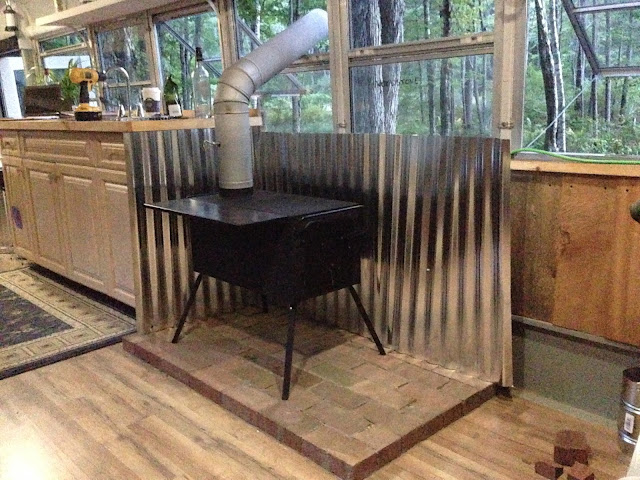 As it cooled down I lit the fire, which gave the bus a nice sweet smell of wood smoke, and put some music on. I sipped some equally smoky Laphroig, and lounged on the couch. 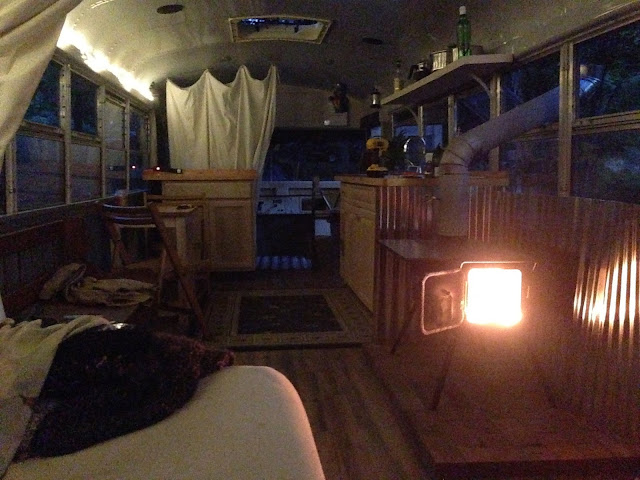 The bus now runs on diesel, batteries... and hardwood. 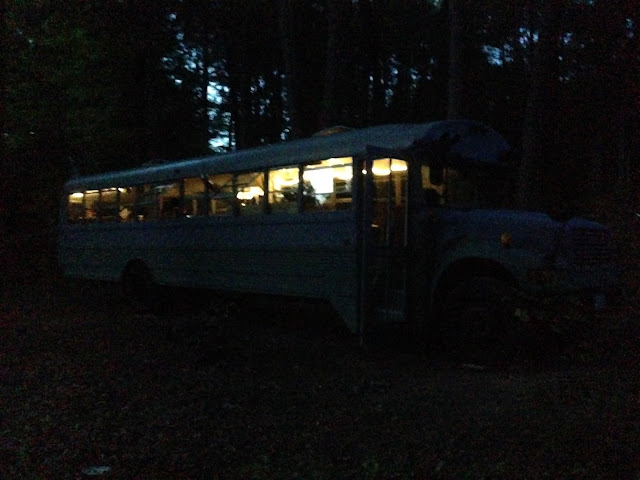