I spent most of the day working my DC accessory bus.  I now have three electrical systems, all drawing power from the same shared battery bank.

The first is the bus's 12 volt DC system, which the bus was born with at the bus factory. I can turn this system on with the bus key to accessory or ignition, and I can use the cabin dome lights, but I really don't have the ability to plug in anything else. It draws 6 or 7 amps to run headlights and some other bus electronics. The headlights also may or may not turn on when I turn the key to accessory; it's totally random, mysterious, and another 2-3 amps when they're on.

The second electrical system is the 120 volt AC system, which is what the inverter produces. With the inverter I have more lighting, but more importantly the ability to run power tools. When I run the 2000 watt inverter, I try to load it and charge as much as I can for efficiency's sake. The inverter draws about 3 amps running with no load, and makes a humming noise (which is why I put a cabinet over it.)

And now I have a third system, which I'm calling the DC accessory bus, which is another 12 volt DC system wired right off of the battery bank. This system will be seeing the most normal day-to-day use of any system; on it I have the water pump and a several new cabin lights. I wired the system with 2.1mm jacks, much like you'd see for charging a laptop. With two bright 3W LED spotlights, I'm showing a current draw of 0.5 amps, so I could run these lights for a bit more than a month straight before I'd drain the battery bank.

I used a six bank Blue Sea Systems circuit breaker panel, and a bunch of 2.1mm male and female fittings I got off Amazon. Again, when you need something for a bus build that is somewhere between an automotive product and a house product, the marine supply stores online seem to have what you need! I spent most of the morning cutting wire and soldering terminals. I mounted the whole assembly on a sheet of scrap acrylic sheet cut to size, for ease of installation in the cabinet. 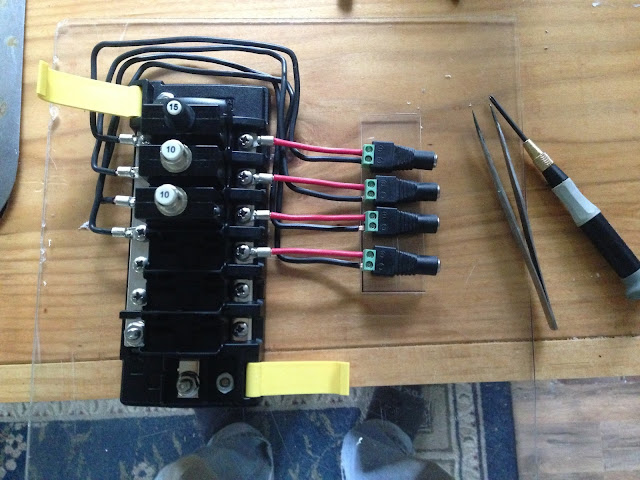 The panel mounted in the cabinet, and illuminated by a 3 watt LED it is supplying with power. I did manage to blow an auto-style fuse going into the circuit breaker panel by crossing some wire ends. Oops. 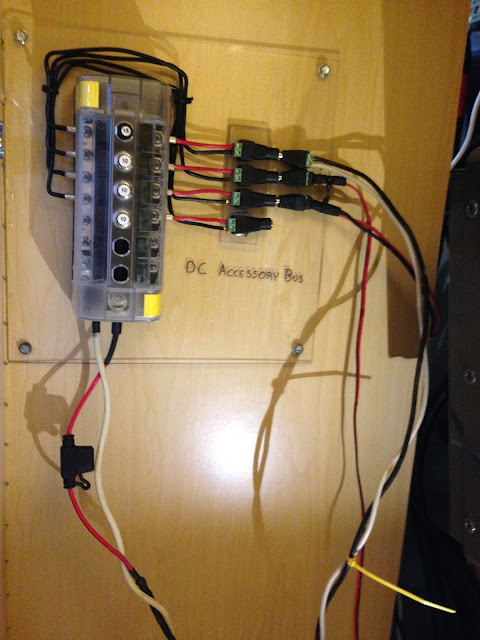 The DC panel next to the AC inverter. The new DC bus will be used for low-current day to day stuff like lights and the water pump. The inverter's AC system will be used for charging tool, laptop and phone batteries, and running power tools. 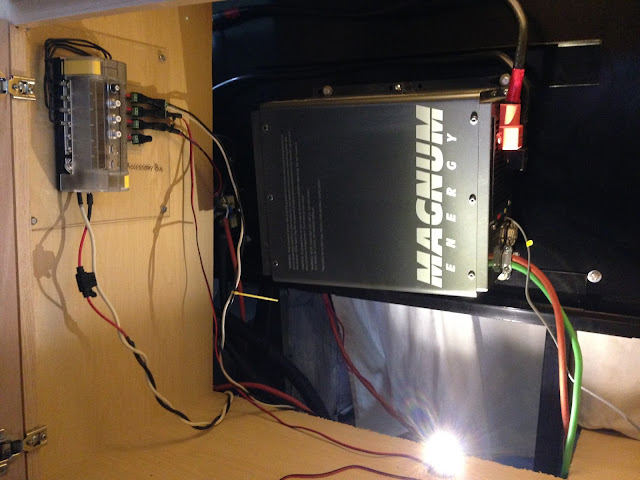 I made several "extension cords" today, and secured them along the ceiling with panel screws and small plastic lamps I had lying around. 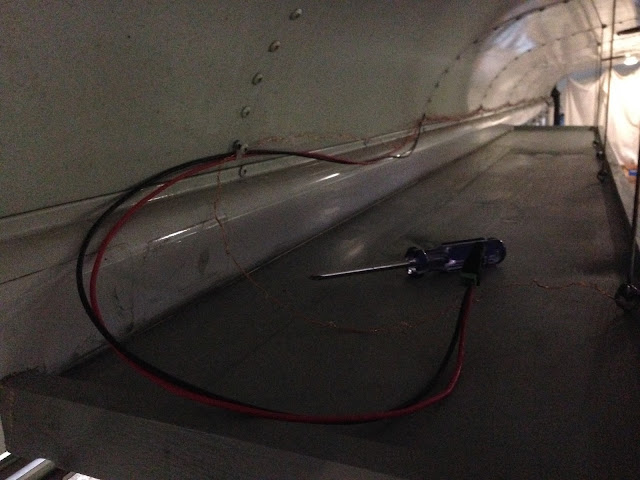 I crafted mounting brackets for the little spotlights out of some scrap aluminum I had; basically a hole for a panel screw, a 15 degree bend made with vise-grips, and a tab that the light will get screwed onto (I need to buy some screws small enough tomorrow.) Here's the dining area's spotlight, which illuminates the table nicely. 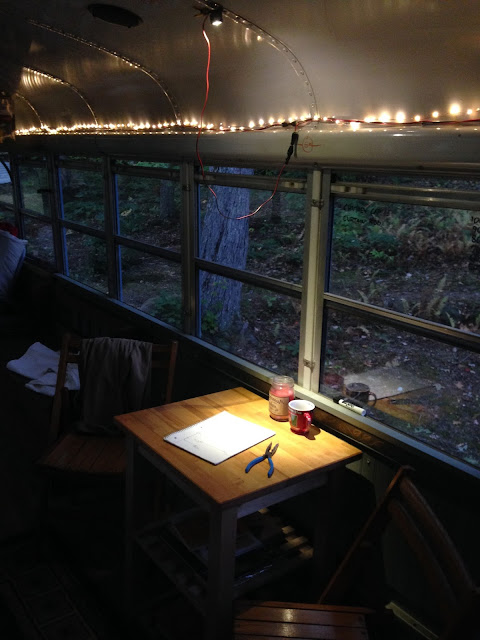 In the bedroom I now have a reading light. 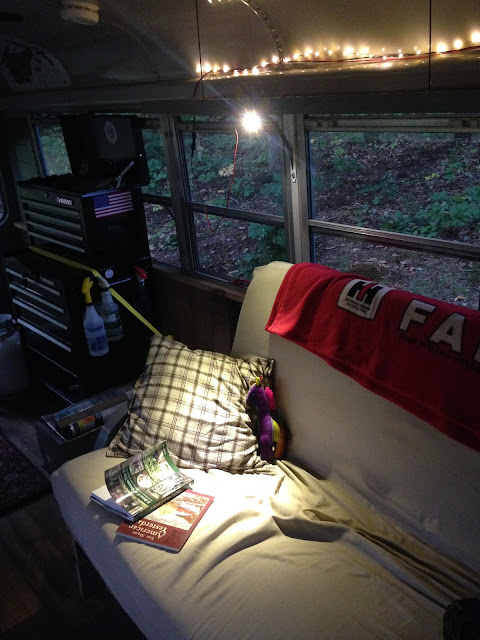 And in the back of the bus, I set a light to illuminate the open drawers of the toolbox.

I neglected to mention in yesterday's post that I added a smoke and carbon monoxide detector at the behest of my medics. The detector is sufficiently obnoxious, and I placed it above the bed. I also bought a bunch of ABC (dry chemical) fire extinguishers, and mounted a second extinguisher at the back door of the bus. I take fire prevention seriously, and the question "what happens if this fails?" enters my mind frequently while I'm working. ABC fire extinguishers are good for fighting almost every kind of fire, but not great. A CO2 extinguisher and a foam extinguisher, for fighting liquid fuel fires, would be a good thing to have when I'm out in the sticks. 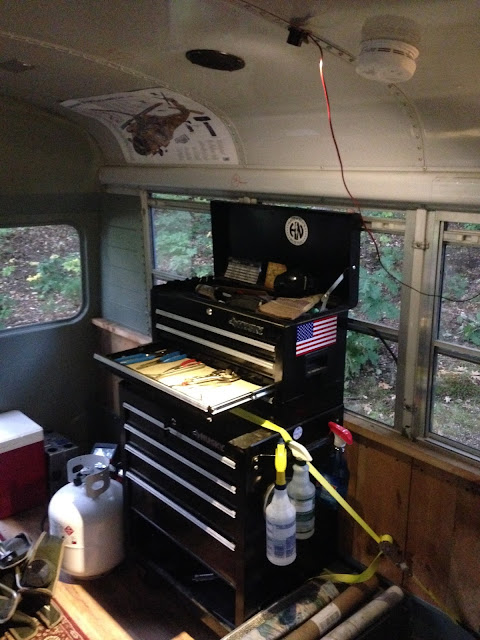 Best part of the new lights; a mere 0.5 amps drawn with two of the lights on. 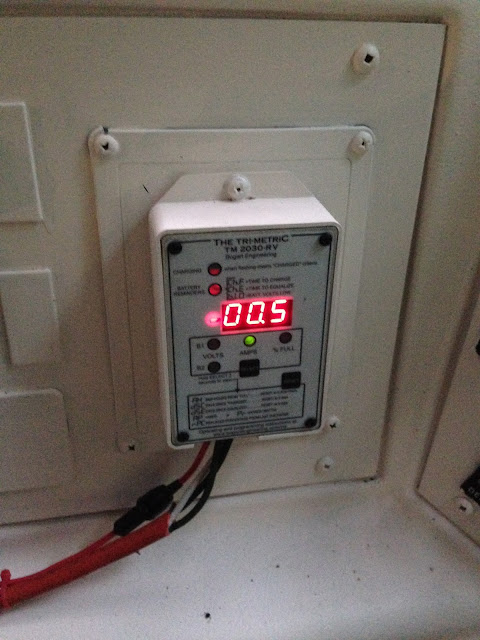