Today's project was to get as far as I could wiring the inverter and the battery bank into the bus. After being hesitant to start an expensive and riskier project (i.e., burn the bus down if I screw it up,) I attacked the project early this morning.

I started off by taking the angle grinder to one of my surplus shelves, trimming it to size, and laying out my electrical components and trying to envision the flow of the system based on the resources I had. 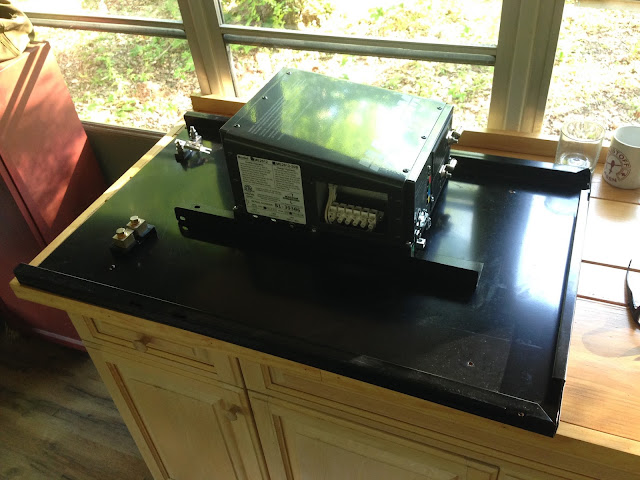 The shin sheet-metal panel, mounted on the frame behind the driver's seat. 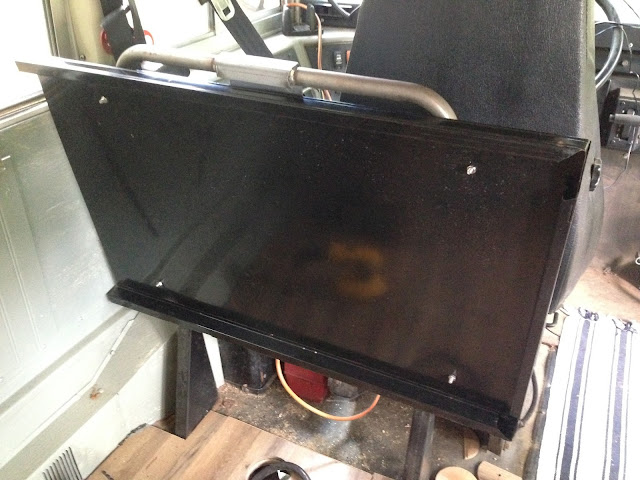 Inverter, shunt and fuse mounted to the panel. On a wall panel, the inverter can only be mounted in two directions, and I didn't have the debris shields to mount it "up and down." The inverter, which must weigh about 50 lbs, is mounted through a pair of L-bracket stiffeners to help the panel stay strong. Thanks for the help on this Stephen! 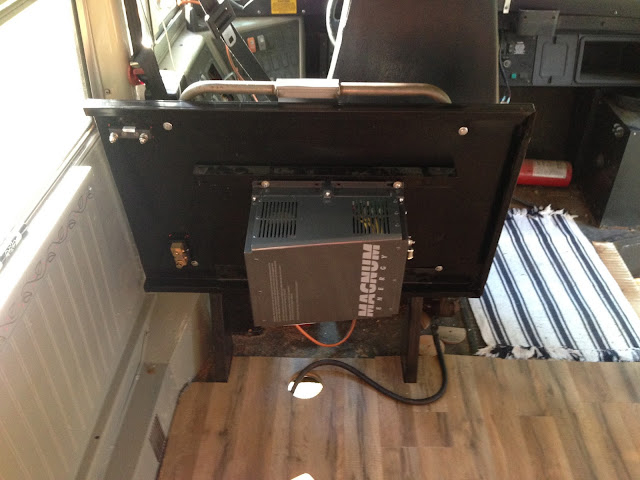 I had to make a few of my own battery cables. I filled the terminal lugs with solder, kept liquid by a soldering iron and a torch working together, then plunged the end of the cable into it. While it was still hot, I crimped it by squeezing it in the vise. Not having any heat-shrink pieces large enough, I gave the ends a liberal wrapping of electrical tape to keep moisture out. 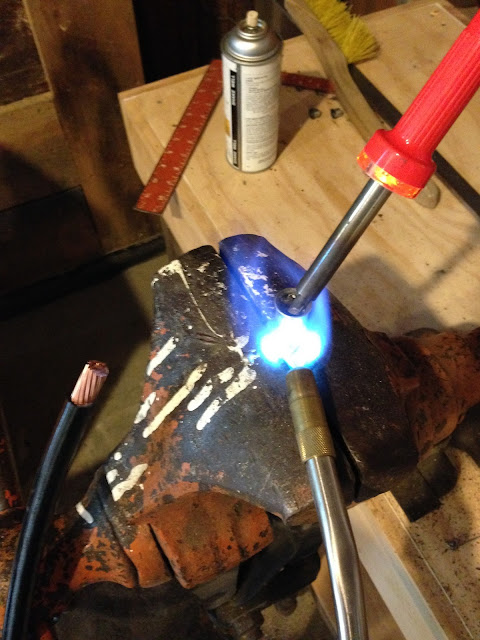 My hand-crafted cables installed on the inverter. The 3/0 (pronounced "three ought") cable was very rigid, and each cable was test fit several times and trimmed to size. The orientation of the lugs was the most difficult part; I had to have the cable bent to it's final shape before I could put the second terminal lug on. 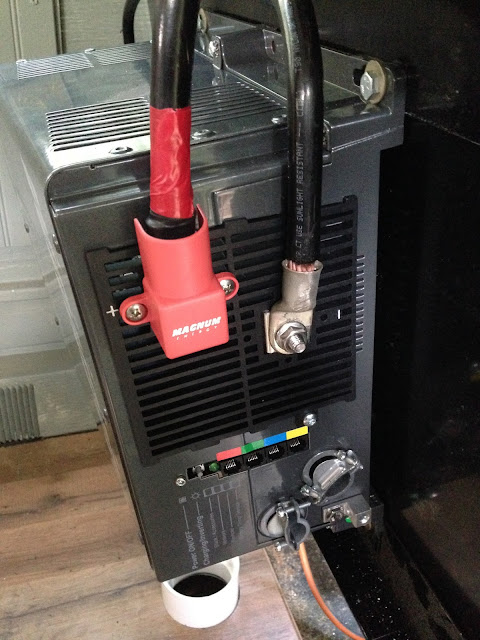 Making progress. To help prevent chafing, a union for 3" PVC pipe, which has an outside diameter of 4", was installed into my floor. To find this perfectly sized piece of pipe, I took a packaged tape measure for a test drive in the plumbing section at Lowes, but then returned it at the end (forgot my calipers at home.) 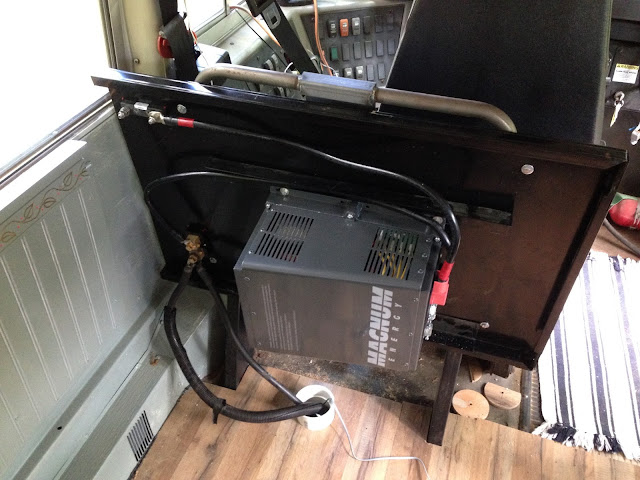 The battery bank had to be adjusted several times to make all the wires fit. I took the negative-to-bus-frame ground off, as all negative wires have to be routed through the shunt on the panel, and ran it up through the floor to the shunt. The black cable with red duct tape is the DC positive lead up to the fuse on the panel. The little black box on a terminal lug in the back is the battery temperature sensor. I also drilled new holes so the battery clamp rods could be used again. Closing the tray is a little tricky now! Lots of wires and not much space. 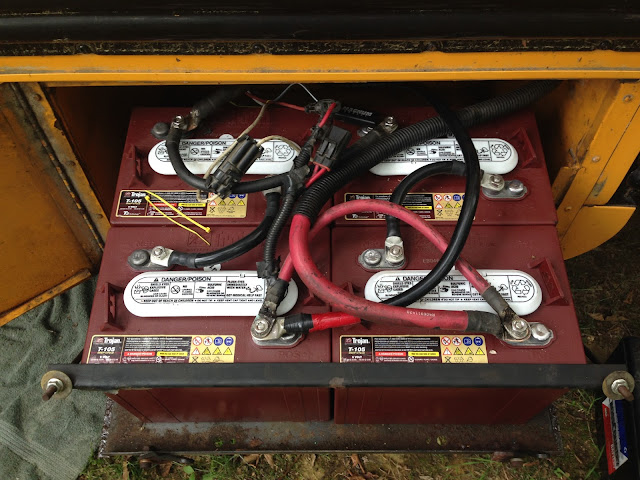 Things are coming along! Measuring 12v DC between the shunt (lower middle) and the end of the fuse-block (top left with red cables.) I checked several times as I went along to make sure the right kind of power was getting where I needed it to go. 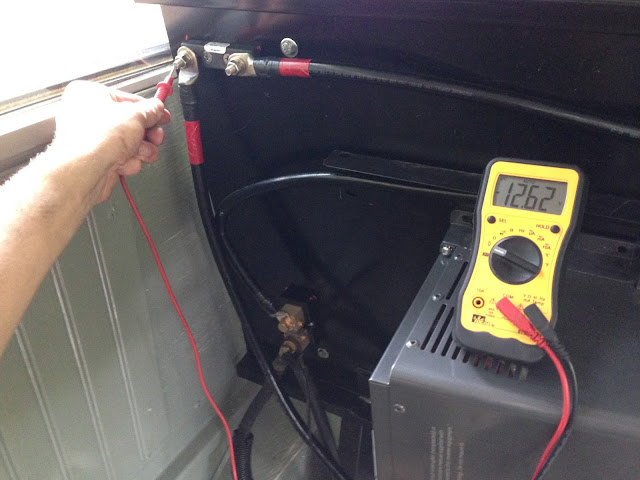 300 Amp fuse installed. This will protect my system and keep the thick 3/0 wires from melting if anything goes wrong. With the fuse installed, the 12v DC system up to the inverter is now energized. 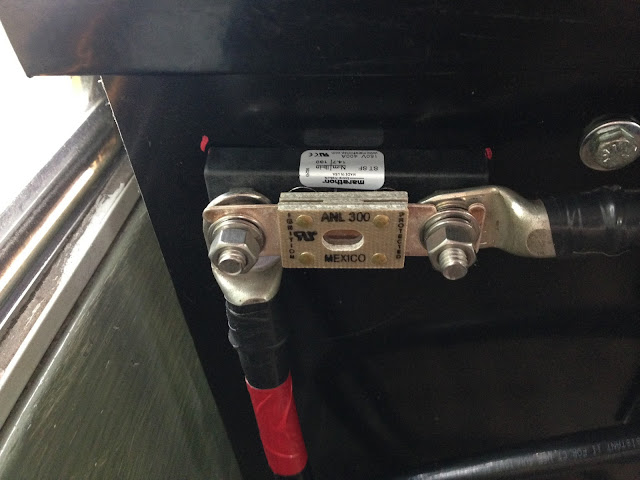 Moment of truth... I pushed the tiny gray button... the little green light is flashing, and I can hear the fans whirring. The inverter has power! 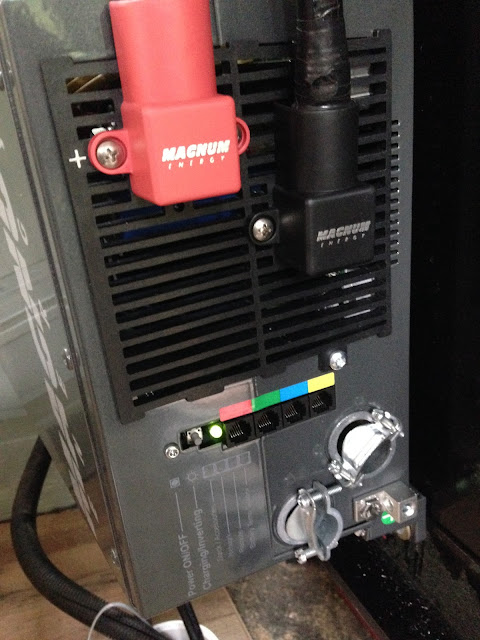 I ran the bus again to make sure the negative-to-bus-frame ground being removed wasn't going to affect anything, as it appeared to be redundant, then walked around trying to electrocute myself by touching things. I didn't get zapped! Also the bus still hasn't burned down.

Now that the "backside" of the inverter is wired, I will do the "front" tomorrow. I'm planning on using extension cord for the wiring of 120V AC system. The bus has front and rear engine block-heater outlets mounted on the bumpers... so I know where I could find a decent heavy duty cable that's about 25' long!