Ouch, 10043? I haven't posted an update in a while. Unfortunately that's because I haven't done much work on the bus in the past few weeks, as I was at a course for work. I'm hesitant to post updates without any real content; I assume my readership is here to see progress, not read about how I'm feeling about the lack of progress I'm making!

Distance and time away from my project has given me perspective, though. I really have three things left that I need to do;
1.) Wire in the battery bank and inverter
2.) Install and plumb the water tanks
3.) Paint the exterior

If I get those three things done, I will have gotten the entire project to 80%, and the bus will be ready to go out and colonize. I'll hitch my 7.3L Powerstroke oxen team to my modern Conestoga wagon, and head North.

To accomplish the above I've done a lot of research into the electrical system, and ordered a lot of parts online after not being able to find what I needed locally. If you, reader, ever do a conversion like this; sometimes you need a home depot, sometimes you need an Autozone, and sometimes you need both. That's where the internet comes in. It came as a surprise to me when I found all the electrical components I needed on a website for Marine electrical systems. Alternative energy stores, like alt-E in Boxborough, Mass., have a lot as well. Everything I've seen on RV websites/stores has been cheaply made and three times the price it should be.

Secondary projects include the fireplace for the winter, and some kind of exterior setup (awning? Camo net?) for shade outside. I guess I should install a door at some point, too. Ehh... details.

First up, I toured a few parcels of land on Day 10040. One has an abandoned farmhouse, a stream that feeds a lake, and good timber! The old barn, long gone, had a fieldstone foundation. 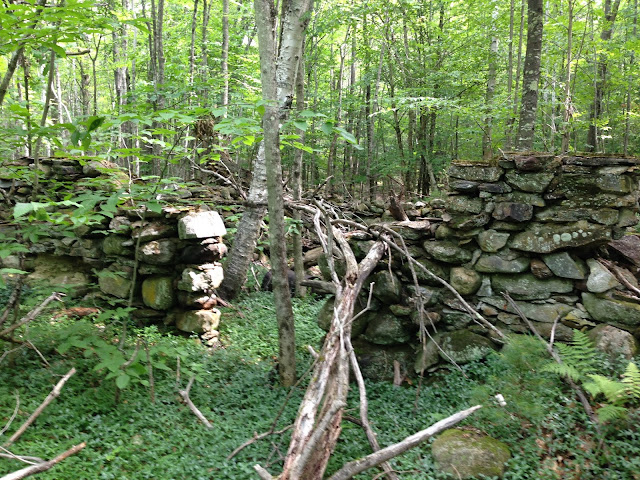 The house, a fixer-upper, was of post-and-beam construction. Despite being halfway-collapsed, two of the bents are holding strong. 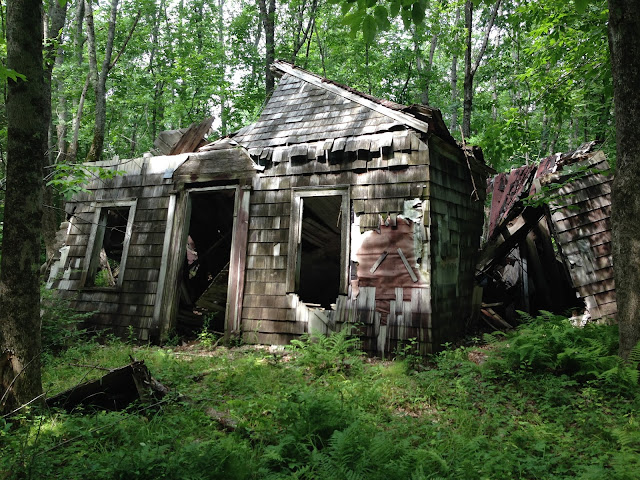 The land has a few white pines fit for ship's masts. Look at all that! That's a new house. I am seriously considering this parcel; it's at the top end of my price range, but has enough land and is in a good location. 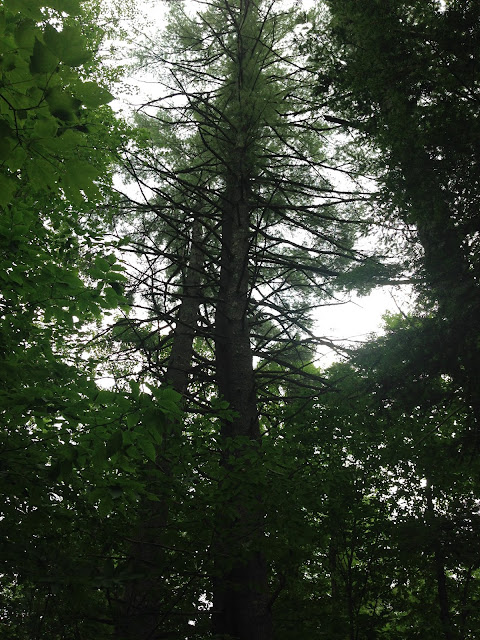 On the bus, I pulled out the battery tray. These two massive batteries are connected in parallel (still 12 volts, but more amps) to crank over the big diesel motor when it's cold. I imagine they will end up in the F350. 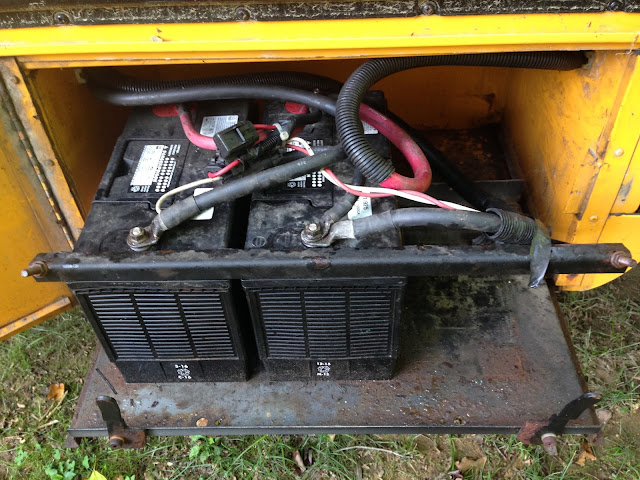 I'm replacing these batteries with four Trojan T105 6v golf cart batteries. To keep my 12v system, I wired the four batteries into two pairs of two by bonding the positive and negative terminals. I effectively made two very large, two-piece batteries with the same voltage but a lot more amps. Using the bus's factory wire harness, I connected my two (four) batteries. 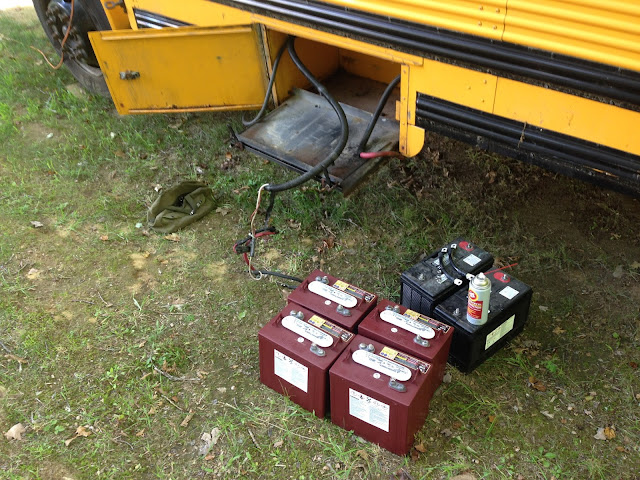 Using Yankee ingenuity, some minor guesswork, and blind dumb luck, I drilled a pilot hole through the floor, which would come out beside the battery compartment. 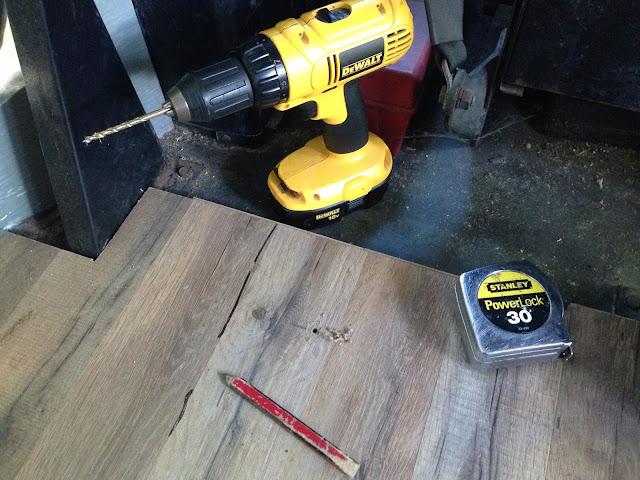 Voila, a 4" hole for wiring to pass through. I didn't hit any cross-members or wires! Success. I'm going to shove a piece of PVC in there... or something... I don't really know yet... 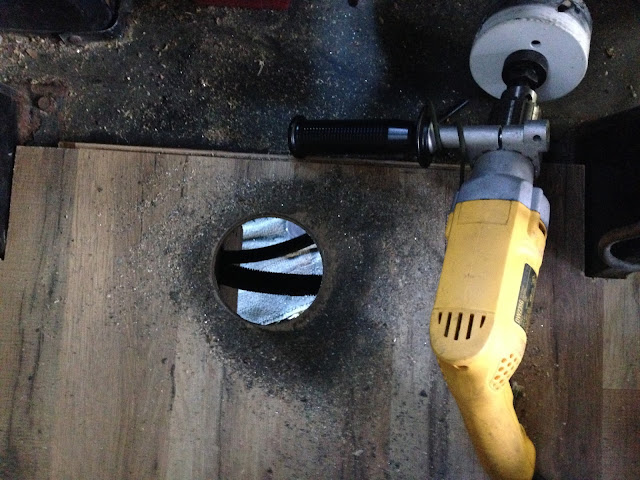 New battery bank, installed! The lights came on and nothing caught on fire. Other than a smashed finger and my ratchet producing a spark-show when it went across the terminals... a flawless install. 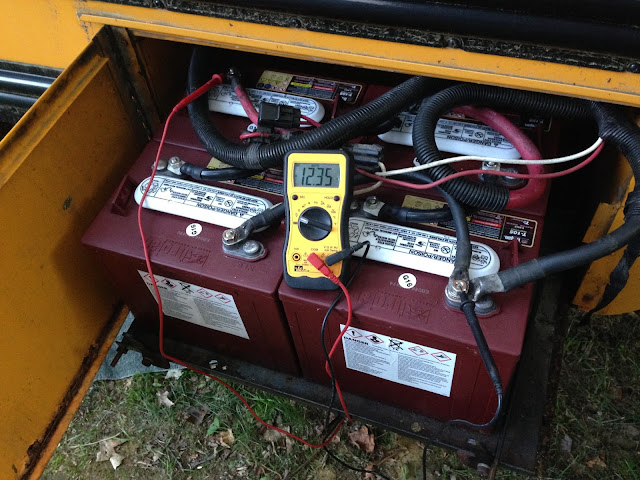 Next I will be putting terminal ends on wires (good luck finding 3/0 terminal ends anywhere but the internet,) and connecting the inverter to the battery bank. From left to right, the battery monitor will connect to the shunt on the negative side, to monitor the use of the batteries, and a 300 Amp fuse will protect the system on the positive wire. 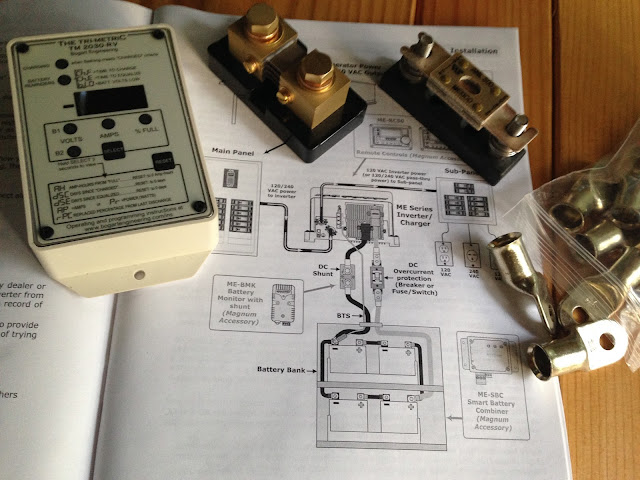