The focus of the past few days has remained on the F350. I had it inspected on Day 9994, and the shop said it looked good, except I had a cracked frame cross-member which needed welding. With the help of my coworkers, I crawled under the truck and tried to find the crack, and found three or four cracks that the shop could have been talking about!

The shop referred me to the welder up the street (the same guy who turned down a very simple welding request I had over a year ago, which put me into rage-mode and prompted me to take a welding class at MCC and buy my own stick welder.) I saw dollar signs as I imagined someone removing the truck's bed, pulling the rear fuel tank, making the weld, and putting it all back together. Instead of letting someone else rob me blind, I mentally started going through how I'd do the job myself. After the shop showed me what had to be welded (and told me what a good weld was, assuming I was some cheap hick who was just going to throw a bead of 6011 on the rust and call it good,) I knew I could make an attempt at the surgery.

My welding experience outside of the classroom is several backhoe repairs with 6011, which all came out horrible but continue to hold, and several modifications like additional hooks, chains and brackets, which have all come out alright with 6011 and 7018, and also continue to hold. I think I'm ready to start welding truck frames.

First things first, I had to move the backhoe into position behind the truck, to lift the bed off the frame. To do that I had to shuffle the backhoe and bus. I backed the bus up to make room. Pro-tip; make sure your toolbox drawers are locked, or the slightest rolling motion will cause your toolbox drawers to open and exceed the critical angle past a pivot point. I feel like I've heard that somewhere before... 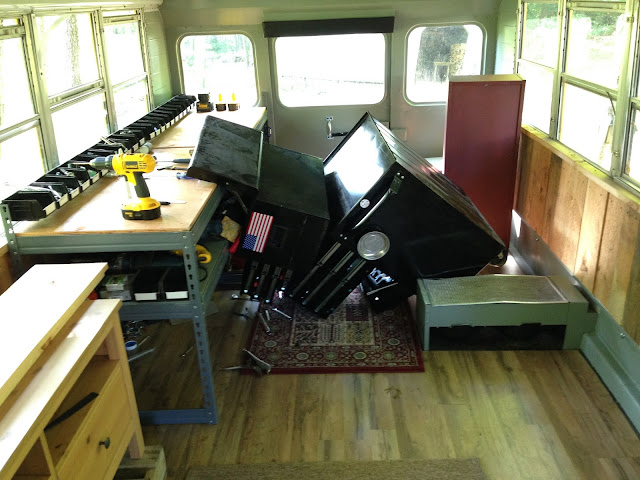 I parked the backhoe, put the stabilizers down, and raised the bucket. Then I backed the truck up until the bed tapped the backhoe's frame, and set the bucket down on the truck bed. The bed was held on with threaded rod and nuts; most I was able to loosen and remove, but I used the angle grinder to cut at least three of them. One cannon plug and three cut wires disconnected the lights. I used ratchet straps to secure the bucket to the bed. 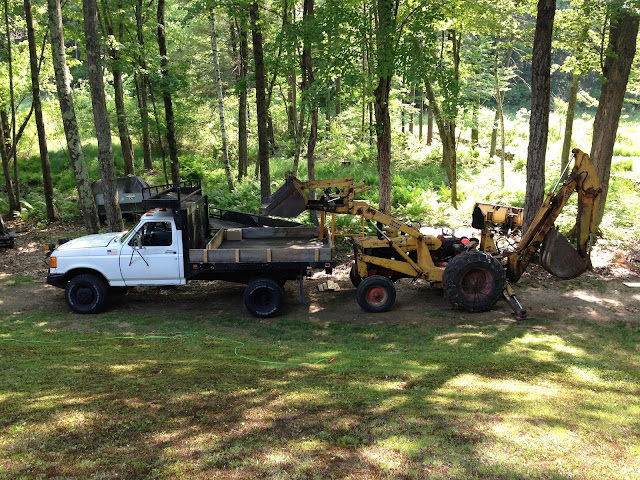 Have I mentioned recently that I love my backhoe? Despite leaking a near steady stream of hydraulic fluid, it is the ultimate $3000 power tool. This '66 or '67 Case 580 Construction King's identiplate is long gone; probably squished into the dirt of a skidder trail somewhere in southern New Hampshire before I was born. It lifts. It pushes. It pulls. It smokes. It leaks. It has an oversized bucket on the hoe. It has welded repairs older than me. It blows hydraulic lines and looks like the android from Aliens when he is dying.

The Case, which was manufactured a few years before Men walked the Moon, easily lifted the bed off the frame rails. 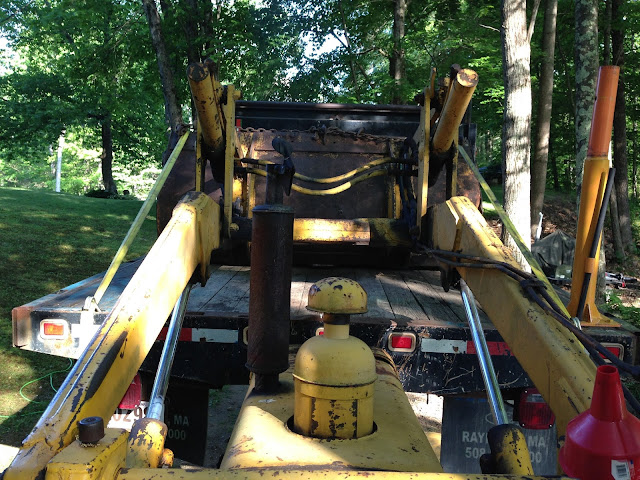 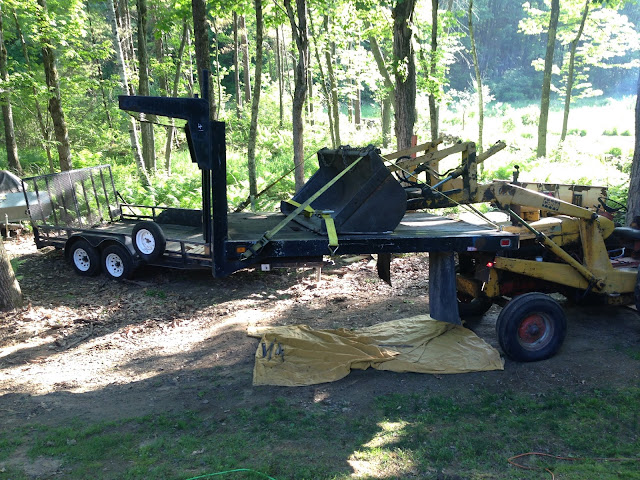 I set the the bed down, shored it with some 6x6's, and left it strapped to the bucket so nothing would move. I began inspecting the truck's frame from the top, and looked at my next welding project. 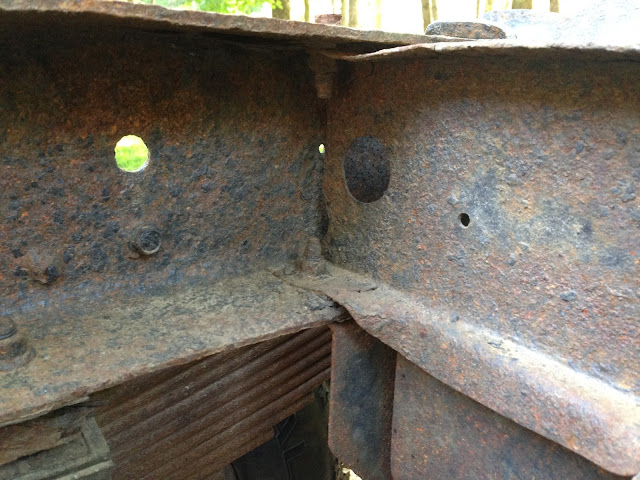 My truck frame exposed, I looked at the aft fuel tank which has a cap over the fill port, at the bent pintle plate hanging off the back of the frame, at the open space where a dump piston would go, and the pieces of threaded rod that held the bed on. How much time and money am I going to spend on this project? 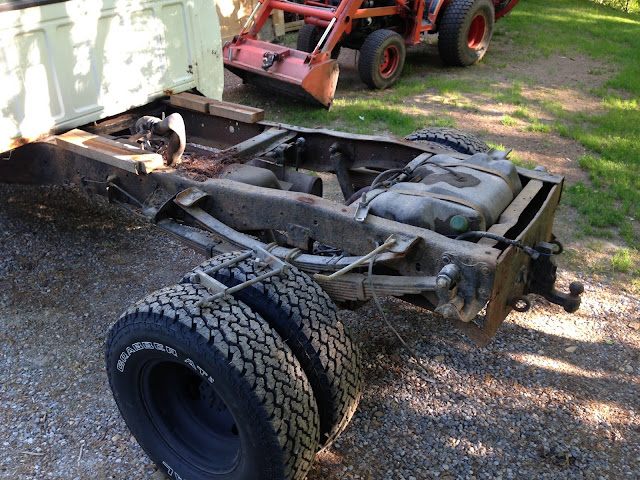 I decided that, in addition to the crossmember weld repair, I would remake the fuel fill lines while I had the bed off. I'll also replace the bed's attaching hardware with some stronger U-bolts. Most importantly, I would give the frame a righteous and thorough coating of Fluid Film. This is a lanolin-based (that's sheep's wool) material that stops corrosion, and forms a protective coating on the metal. It is pretty harmless to the vehicle's plastic and paints, as well as the environment. It's also one of my very favorite smells; like a sweet pine tree. 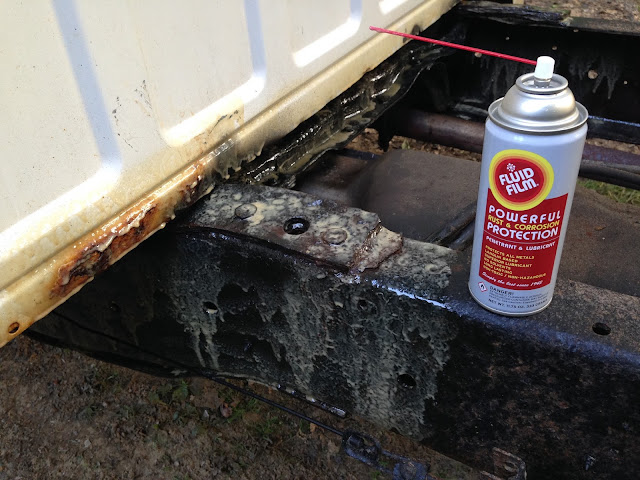 I made a mess today! I hope to have the bed back on my the end of the weekend. With the truck inspected, I will continue on the bus with the electrical panel.

I wear the Guatemala pants for my comrades still serving in the jungles of Coatepeque. Never Forget. 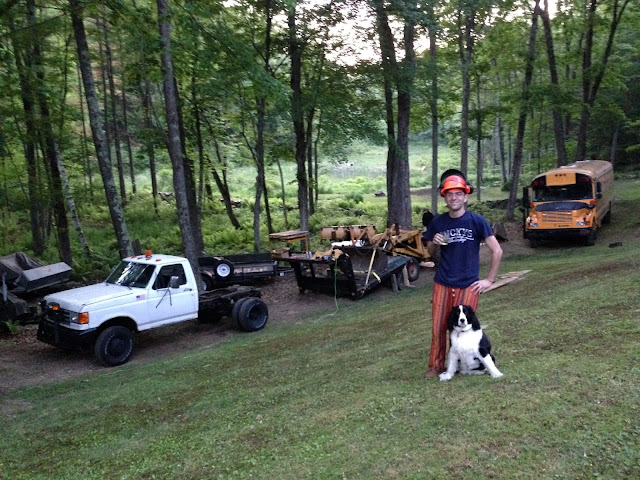