Back on Memorial Day, Day 9991, I continued a few small projects. Hemnes, my Swedish named dresser from Ikea, needed another 4.5" to clear the wheel well. I didn't want to box up the wheel well because it's a cool bus feature, and it would be a lot of work, so I took my Sawzall to a shipping pallet instead. 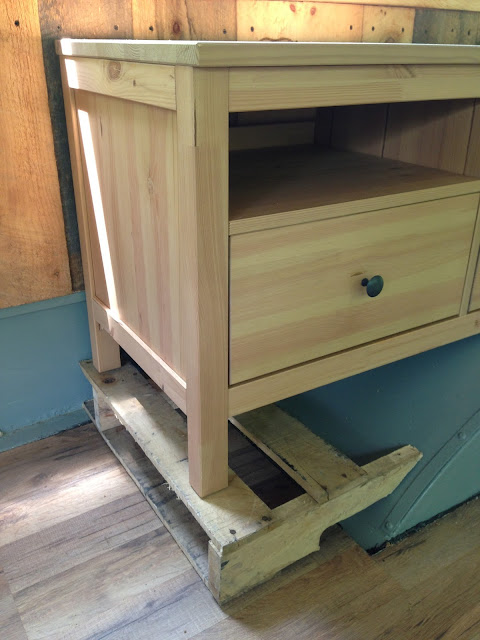 The shipping pallet was built by someone who's T-square was badly mangled at some point, but he chose to continue using it. In lieu of measuring I held the pallet chunks up next to the wheel well, made some educated guesses, and swagged where the cuts should be. I took a little more off than I wanted to, but I think it looks alright. 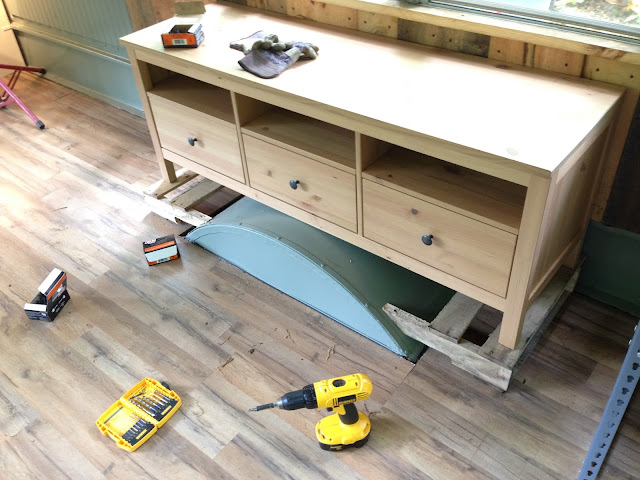 I added another handle to the back of the bus to make the climb up a little easier. 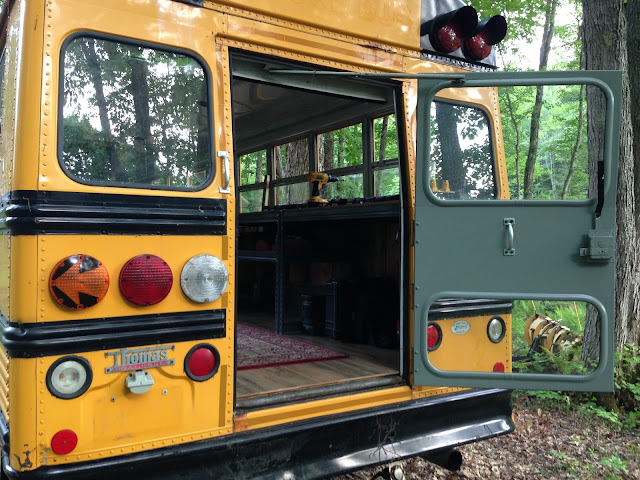 I have received more questions about this corner of the bus than I would have expected. I have been asked "where will you go to the bathroom?" many more times than "will you sleep comfortably?" or maybe "how will you cook food?" or "do you even know how to use a chainsaw?"

This is a composting toilet. I haven't used it yet, and probably won't while I still have porcelain and plumbing, but you can be sure that I will post a review when I do! 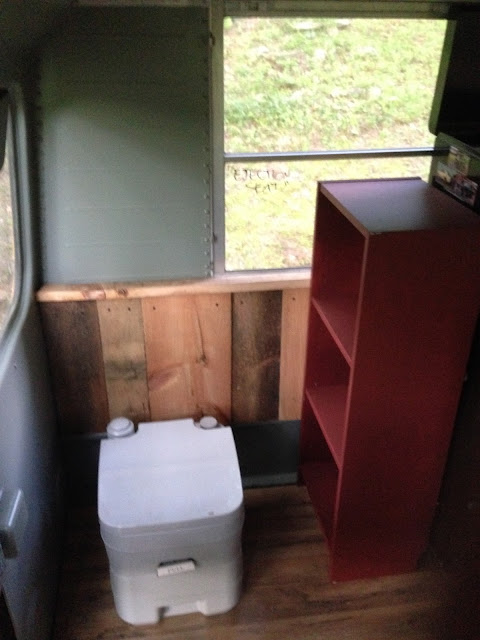 Monday afternoon my parents came back from the North Country bearing gifts; furniture and a wood stove from the Grandparents!

First up is the wood stove. This little Scandia stove is exactly what I had in mind, and my grandparents just had one lying around. My dad and I briefly assessed the weight while unloading it from the car, and agreed that using the tractor to load it in would be prudent. 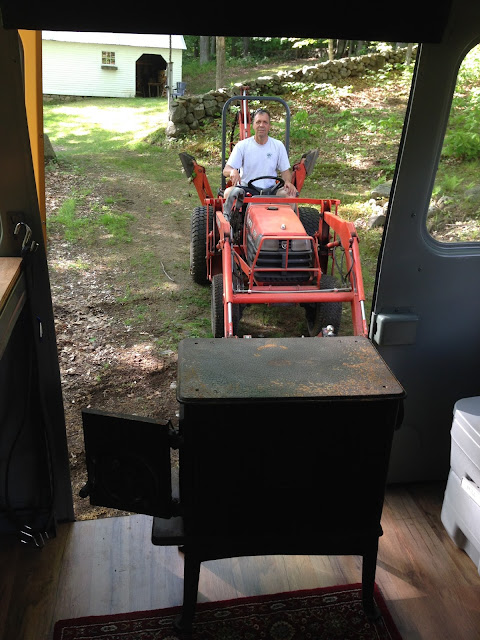 I'm planning on routing the chimney out a window, through a rectangle metal insert. I've seen a lot of skoolies go through the roof, but I'd rather not do that kind of major surgery. It's not the space shuttle; sticking it out a window will work just fine. 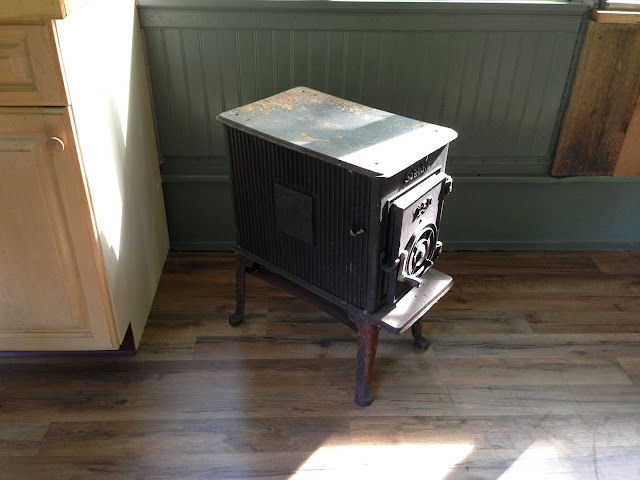 Looking forward from the rear axle; grandparents donated a nice wooden bench, which opens up, that I'll probably put firewood into. If I can have one piece of furniture do two jobs it makes a big difference in available space. I also have another carpet, and the little Scandia wood stove. I'll probably put bricks down under the woodstove, then build up a heat shield nook where it is next to the counter. 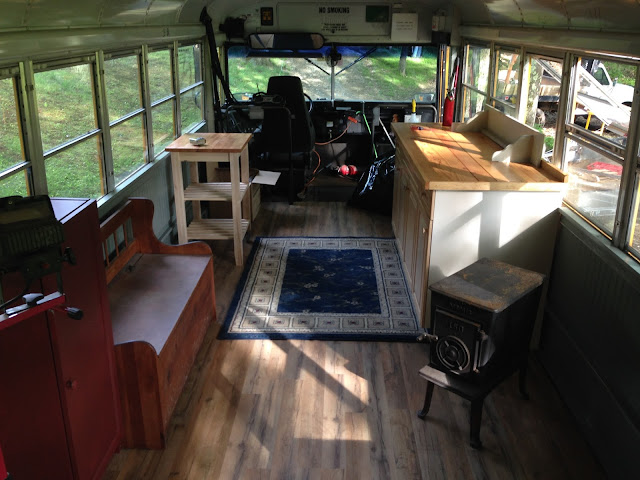 Looking back from the rear axle; dresser over the right dually, workbenches with stained birch plywood, toolbox and ejection seat... I mean composting toilet. 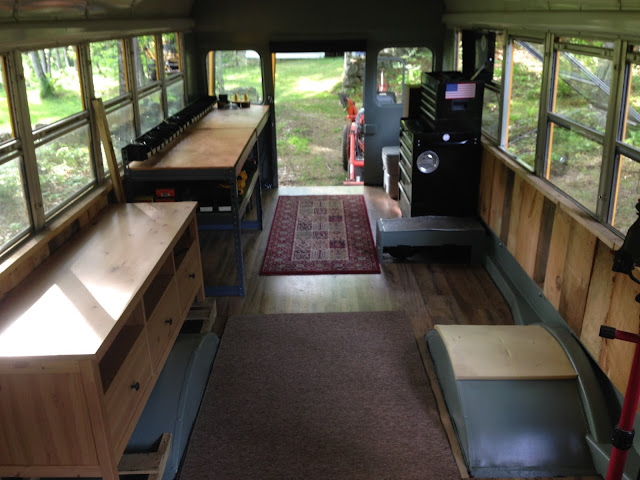 Today the F350 got new shoes in the form of six General Grabber AT2's. I had Town Fair Tire remove the chrome inserts in the duallies, then I hit the wheels with some dull black spray paint. The hoist got a coat of Caterpillar Yellow (one of my favorite colors.) I have a case of Fluid Film spray cans, a lanolin based corrosion prevention compound, on the way for the truck's frame. US flag sticker installed on left fender. My new farm truck definitely came with some free field mice in the vent system; I left out traps tonight. 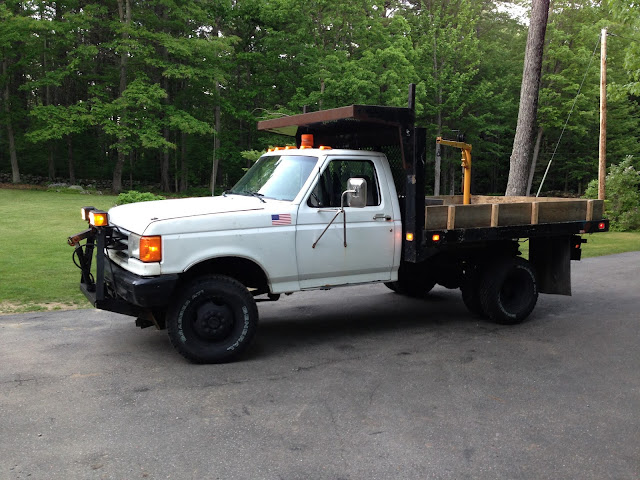 Next project is the shelves over the windows, and the Inverter's electrical panel.