A warm December day was capitalized on. I'm beat.

I got in touch with someone on craigslist selling some chickens, to give my sole survivor of the Iain & Darcy flock some company for the winter. The small flock for sale included three Rhode Island Reds, a black Australorp, a Barnvelder, a white Ameraucana, and a cool technicolor rooster, who were all hatched in the Spring. We captured the hens pretty quickly, but the rooster was a bit leery of the three humans with a rake and a box. He was ultimately captured by cornering him in the horse stalls, and being body slammed into the wall as he tried to fly away. Once he was held in my arms, he stopped resisting immediately. "Okay humans, you got me." They enjoyed a ride up I93 in a cardboard box and plastic bin. 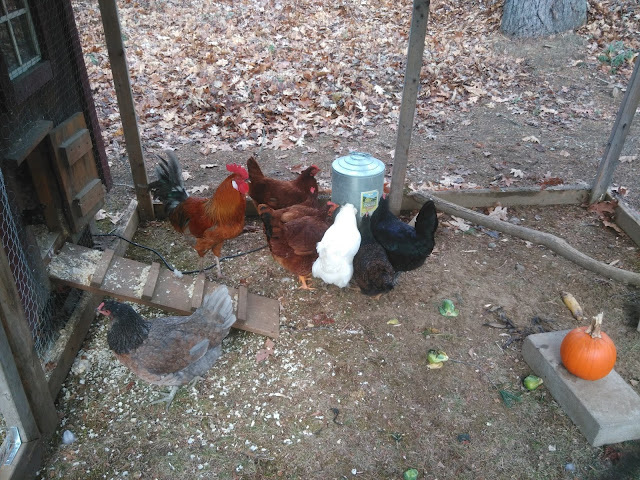 The seven new chickens were thirsty after their trip. Sophia, the Veteran of multiple dog attacks, is the gray/brown Ameraucana in the lower left.  The rooster is on the top left; he has a bunch of odd colored feathers in his tail. With luck, the rooster will rough up my family's dogs if they get too close to the hens.

I'm hesitant to name them, because they seem to die easily, but I'm thinking the rooster will be named U-P-G-R-A-Y-E-D-D.

So Sophia has coop companions, and my egg-makers won't freeze to death. I wanted them to free range, but the domesticated bird-dogs have proven to be skilled domesticated chicken hunters. The run is a little small for a flock of eight to live in continuously, so I decided to expand it. 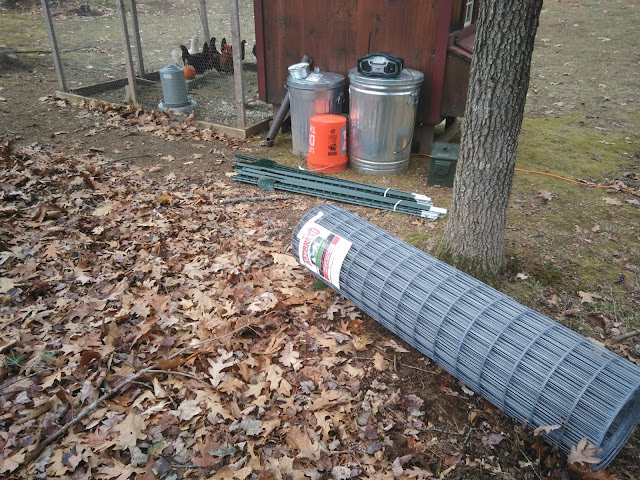 I sacrificed money for time, and bought a 100' spool of wire fence. I kicked myself for not bringing one of the spools down from the land! I also picked up a quarter mile of galvanized electric fence wire, ten T-posts, and a new door latch. 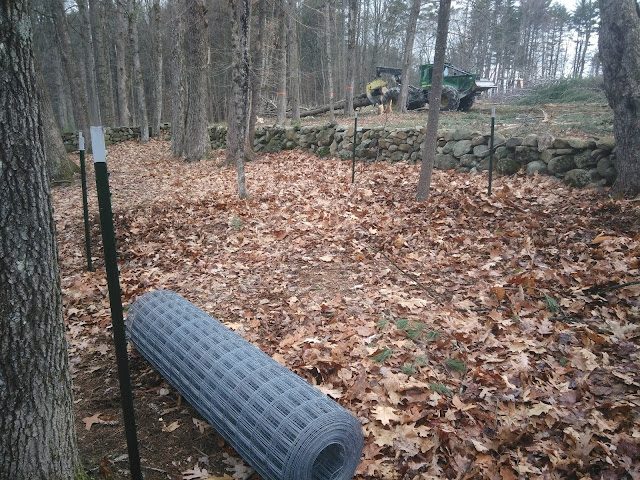 I laid out the T-posts in a 30' x 14' box, which would give me some leeway if this takes more material than I thought. I drove the posts into the ground, which wasn't quite frozen yet, using a big scrap piece of steel pipe I had lying around. I spent a few hours unspooling the wire fence, and tying it to T-posts using chunks of twisted wire. I bowed the bottom of the wire fence out, so it would be harder for a wild critter, or my dog, to get in and eat chickens. With the fence all wired in, I snipped a small door in their old run. 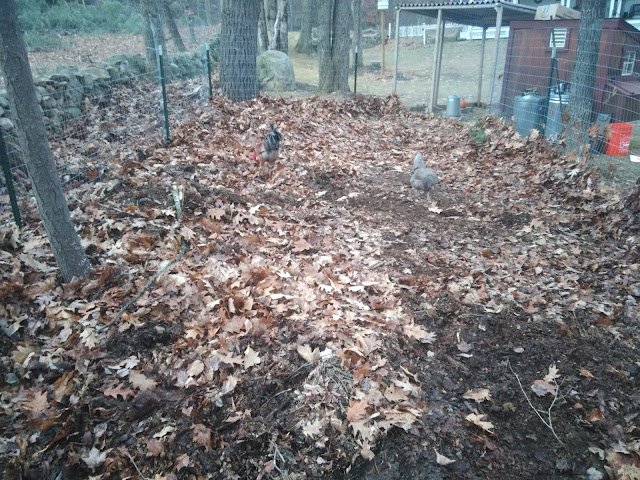 Sophia and the rooster were the bold birds who tried out the new run, while the other hens roosted in the early evening. They now have their enclosed coop, a nice roofed three season room, and an open-air run. We will see how easily they can scale the 5' fence (I'm envisioning eight chickens eating all the bugs outside of the wire, 10am, tomorrow) and how exposed they are to air attack from hawks. I have seen a few clever ideas to deter hawks; one was creating a mess of strings above an open air run. Another was making a teepee of thin branches. 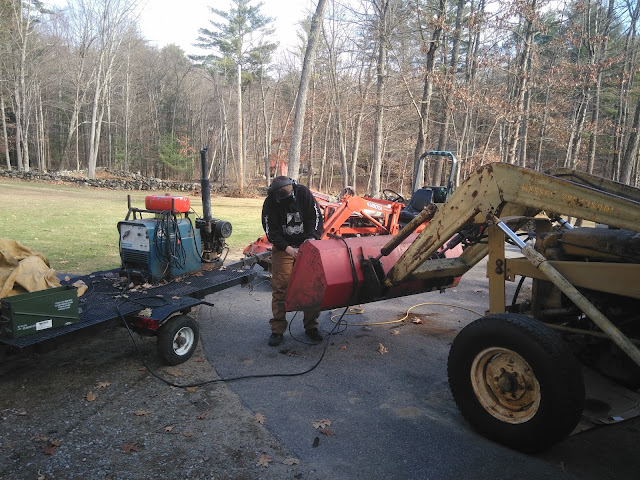 Last weekend, Travis and Gavin came over to keep working on Gavin's Massey Ferguson. When we left off last time, we got it running with a new carburetor, but noticed that the starter wasn't dropping out when the key came back to RUN... so Gavin and I didn't get the right wires on the right terminals when we installed the starter this summer. Travis pulled the carburetor off, we guessed at the 40 year old wires, and got it running properly. We tuned the carburetor by ear, filled the gas tank, and commenced learning what unlabeled lever does what in the cockpit.

With it running reliably, we started in on learning the hydraulic controls. The 3-point hitch arms have a cool float function, but they are slow on the response. Probably because the hydraulic fluid is low; the loader shuddered as we raised it, but everything functioned fine. With the bucket up, we could start driver's training.

We found that the transmission has three gears, high and low range, and a column mounted reverser. With a sharpie, we drew the shift patterns on the dash. Having some familiarity with the 580CK and the 1700's manual transmissions, I stood on the step and gave Gavin driving instructions as we lurched up and down the driveway. Did I mention the power steering lines are blown out? That made things a little more challenging. 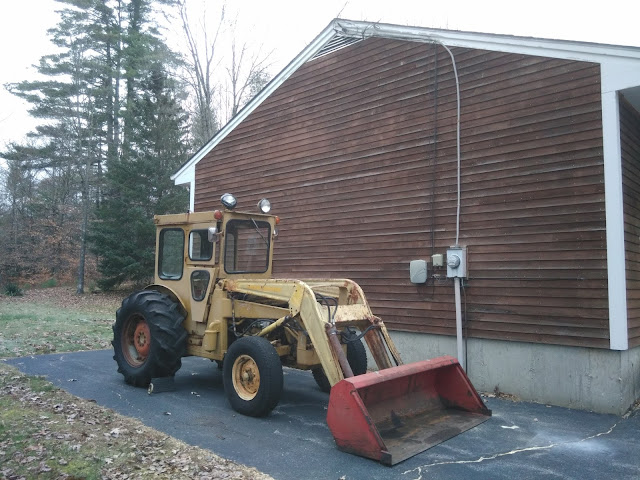 On the last remains of our energy, we got the MF20 on the trailer, and brought it up to Gavin's house. We still have a lot of work to do, but the machine is borderline operational. 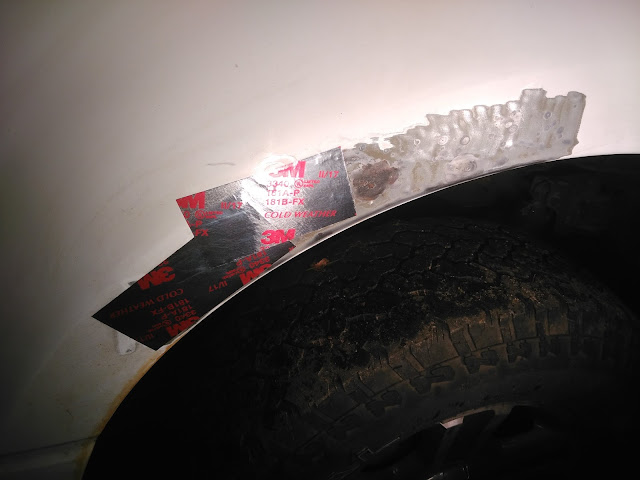 Next task was "fixing" rust holes on the F150 for inspection. I ground down the rust to bare metal and applied foil tape... 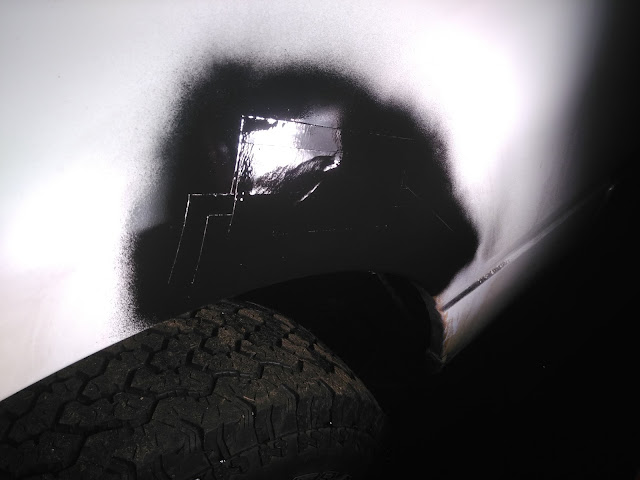 Primed it under a heat lamp... 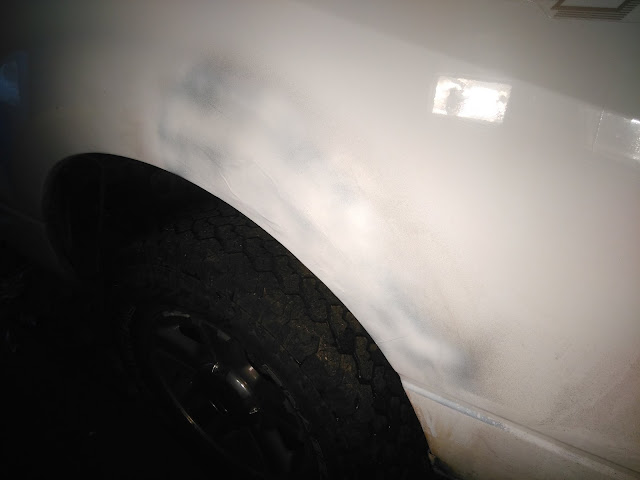 Another few coats of Krylon white... 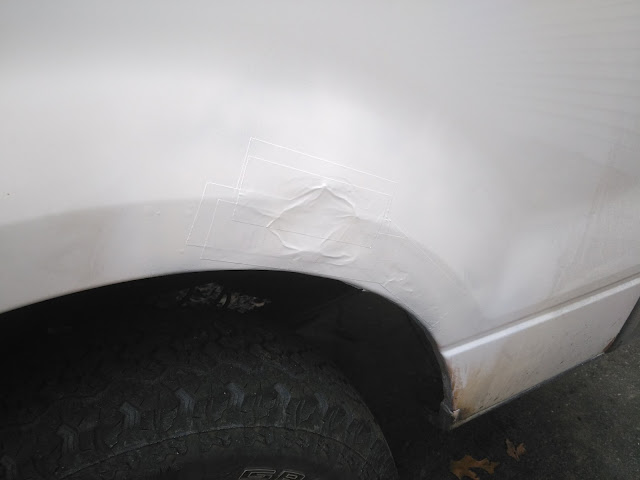 And then I found a mostly-empty can of the "Oxford white" for the last coat. Isn't that fender beautiful? I shoved some WaterWeld epoxy into the separating sheetmetal patch I made on the driver's cab corner, too.

I took it in for inspection this week, and learned that I have a rust hole in my eleven year old's truck frame. It can be fixed, the shop said.

Designed obsolescence. I read somewhere that cars are only built to last 11 years... and my frame is rotting away at 11 years. I just rolled over 166,000 miles, so the truck has driven, on average, 15,000 miles per year. Which is just above the average of 13,476 miles for an American driver. I would like for the truck to survive above 200,000 miles, but we'll see if the rust returns it to the Earth before it gets there.
Posted by Aaron at December 01, 2017