I'm imaging that this winter I will be harvesting a few trees, but with the One Ton still "under construction," and no suitable trailer, I can't transport the big Case 580 without calling someone for help. The 580 also doesn't start without the block heater when it's below 50 degrees. And it's two wheel drive.

Clearly, I need another tractor. Something in the compact range that I can transport with my half ton truck, that will start in the winter, and has four wheel drive, a loader, and a 3-point hitch.

After doing some research online I decided on the Shibaura-made Ford tractors. The Massey Ferguson and Yanmar machines were also in the running. There were half a dozen suitable machines in the area, which I compared by hours, price, distance, physical appearance (is it rusty and scraped up?) and included attachments. I was sold on a machine on Massachusetts' north shore which had meticulous oil changes, and was used for moving snow in a guy's driveway (... so it starts in the winter!) 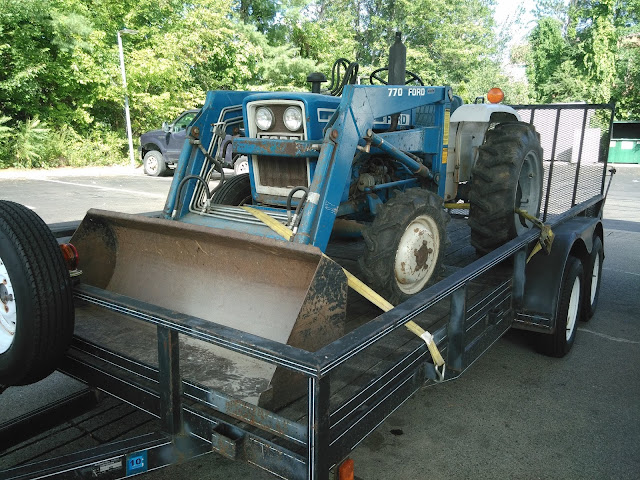 The morning of day 10450 I drove down and bought the machine. It's a two cylinder diesel, with a 4x4 manual transmission (12 speeds forward, 4 reverse.) Hydrostatic transmissions are easy, but this is just fun to drive! Power steering would have been a nice addition, though; steering is a bit of a challenge. The steering wheel should have no problem breaking the wrist of an operator not paying attention to the terrain they are crossing. 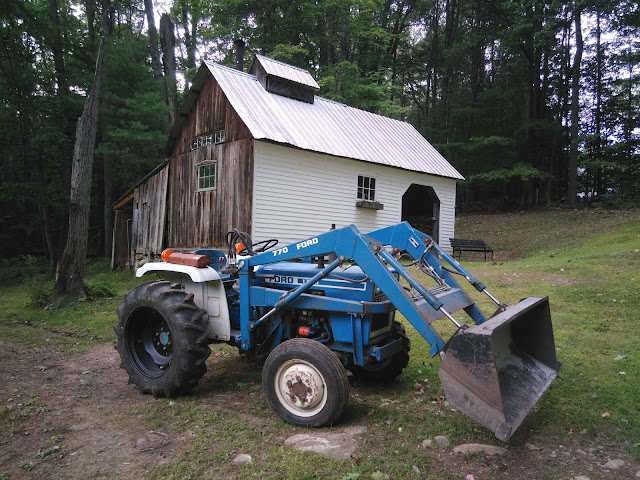 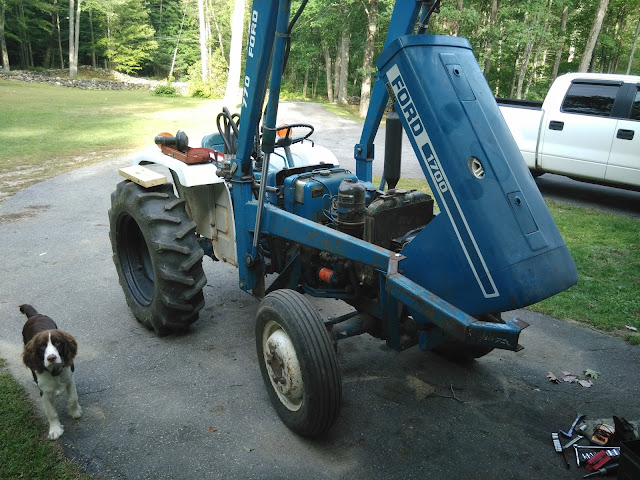 A few lights don't work, there's some crappy hardware holding the front support tube on, and the front tires are weather-checked and leaking on one side, and slick on the other. Otherwise, it sounds great, the gauges work, it makes good pressure, and starts right up.

Day 10451 I continued working on the welder; installing a new battery and the fuel tank, which I pulled from the Case 446 tractor.

I needed a few feet of fresh fuel line for this project, and was distraught when I went to an auto parts store and they had 1/4" fuel line... in 1' lengths for $6.00. I went online and ordered three different size 25' spools of US made fuel line for $20/each, instead. Now I have years of fuel line. What kind of auto parts store doesn't give you the option of buying fuel line by the foot? I'm becoming more and more distanced from box stores. What I really want is a bulk raw materials store; somewhere that you could walk in and get 100 bolts, a metal gas can, a canvas tarp, fuel line and battery cable. A Chutters candy counter of tools, parts and consumables. Is this too much to ask? The internet certainly makes this easier, and the time and money spent on shipping is an easier pill to swallow than the futile, gasoline-burning and time-wasting search of box stores for the odds and ends needed to get a project done. 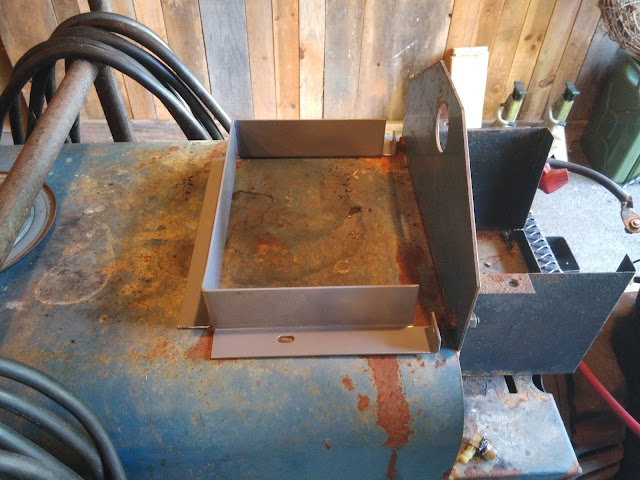 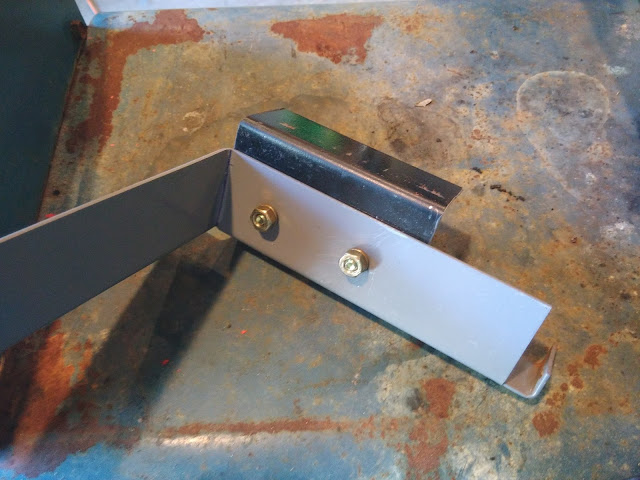 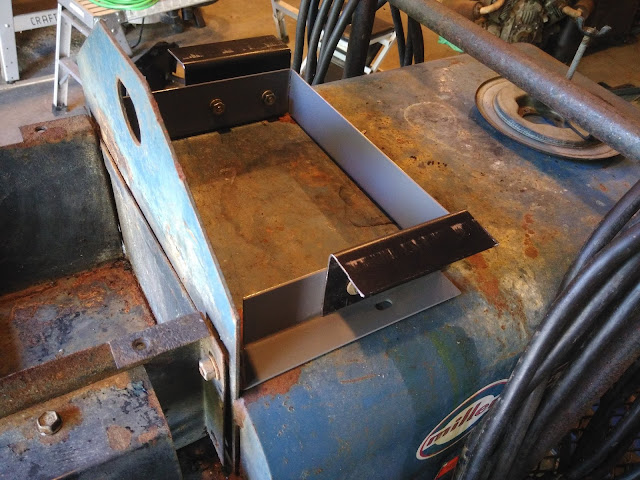 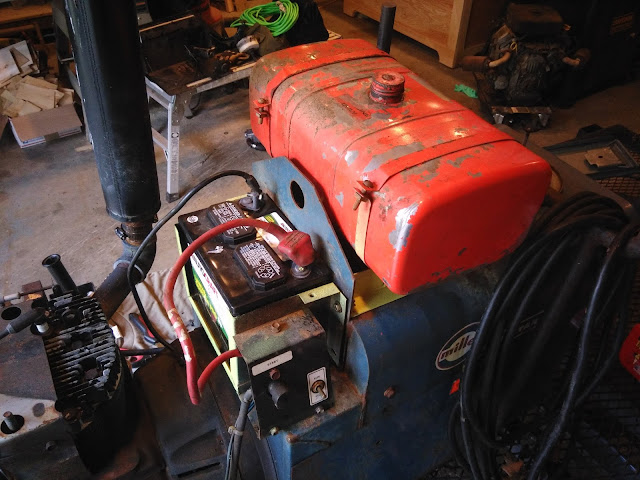 I crafted a mounting bracket out of scrap steel shelf L-brackets, using an angle grinder and a vise, to line up with the two holes that secure the battery compartment to the welder body. The fuel tank is secured with two metal straps, which go around the black tabs on the top of the bracket. I painted the battery compartment and the bracket in primer. The Miller blue, primer green, Kohler black and Case orange look nice together, I think! 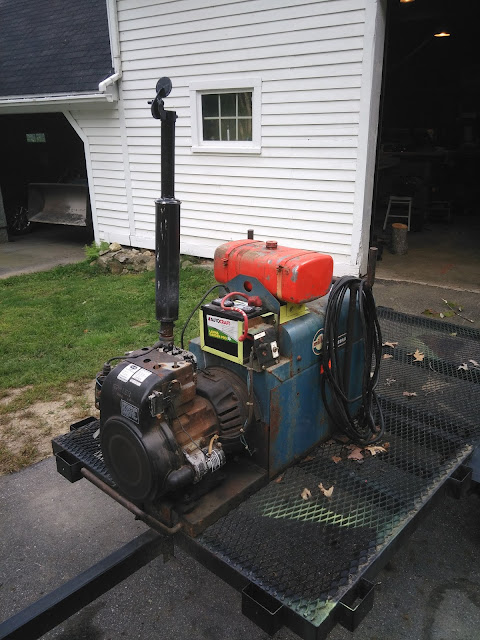 With the welder operational again, I pulled my new tractor and my dad's tractor over to get some new hooks welded onto buckets. I had sheared one of my dad's bucket hooks off by accident last year, so that needed repair. He also wanted a hook on his backhoe bucket for lifting things. I wanted three hooks across the top of my bucket for lifting rocks and logs, as well. 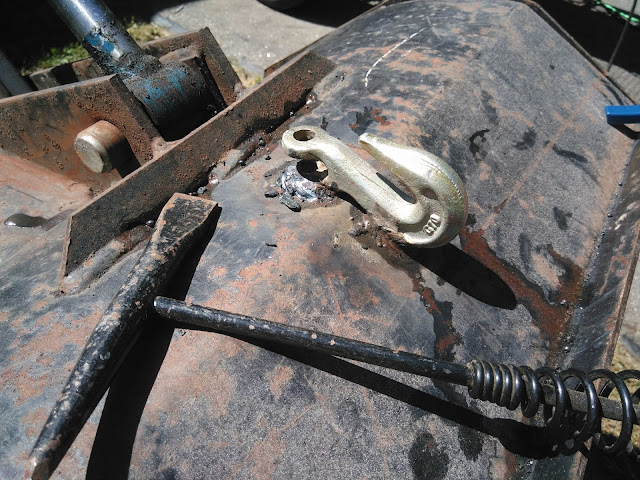 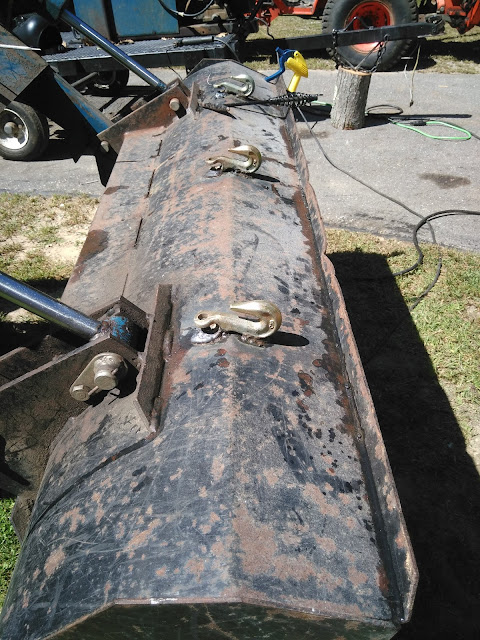 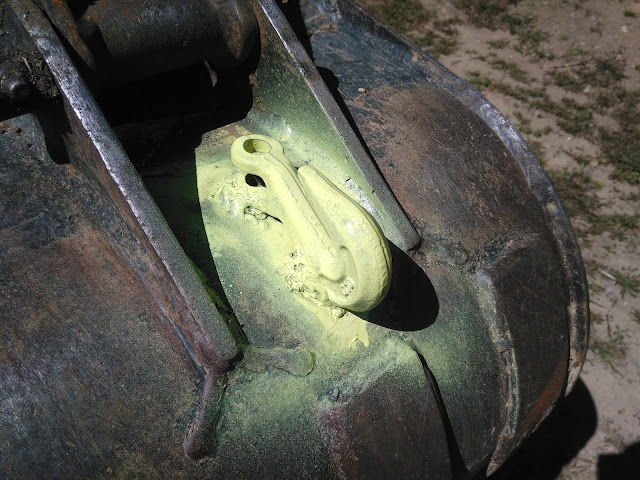 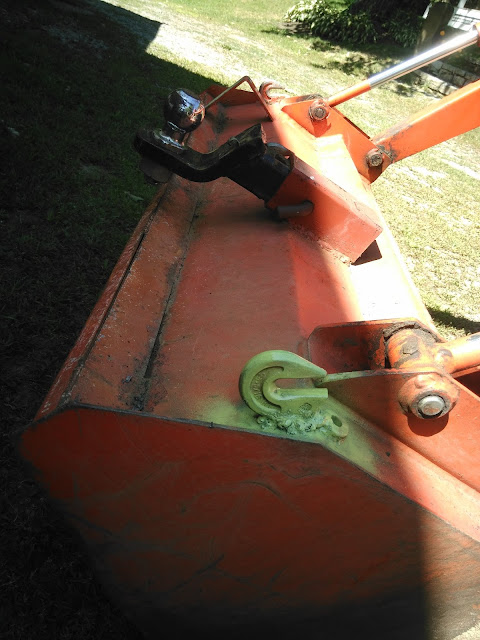 I haven't welded in a while, it took a few passes to get back into the groove. I prepped the areas to be welded with angle grinder and wire wheel, and used #7018 rod (the good stuff!) to put the hooks on. I didn't have to resort to #6011 (the "Farmer's rod" that will create an ugly weld on anything, rust included) at any point so I feel like I am still a seasoned amateur welder.

Day 10452 was largely spent dissembling the Case 446 for parts. I've already taken the headlights, seat and mower deck for the 444 up North. With the recently cracked hydraulic driveline on the 444, I have taken that from the 446, as well. I parted out the machine, and will be posting an ad up on craigslist for the remnants shortly. This machine owes me nothing; I have definitely gotten what I paid for from it.

And on day 10453 I helped my buddy Gavin recover his new/old Massey Ferguson MF20, handed down to him by his grandfather. Talking to my grandfather, and looking at the old layer of forest green paint, this machine was probably owned by the state for mowing the highways. It is not currently running (I don't think the fuel/air mix is getting to the cylinders,) and needs some parts. 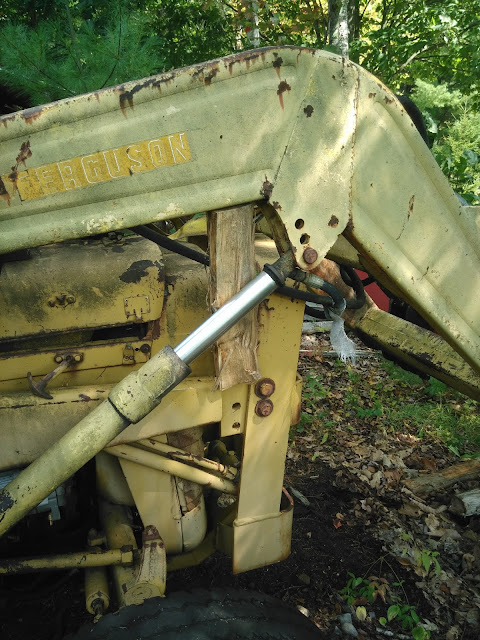 We lifted the bucket with a farm jack. Not having a good place to strap the loader arms up, we used another great multi-tool; firewood. With out hardwood bucket stops installed, we slowly winched the tractor onto the trailer by hand. 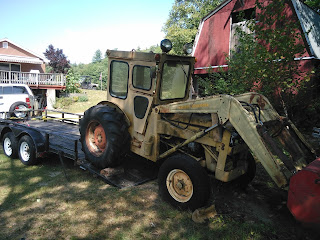 Along the way we killed several wasps nests that had been built in the cab. We used a combination of ratchet straps and the farm jack to bring the tractor up the trailer 3-4 feet at a time. The straps made it easy to adjust between iterations. 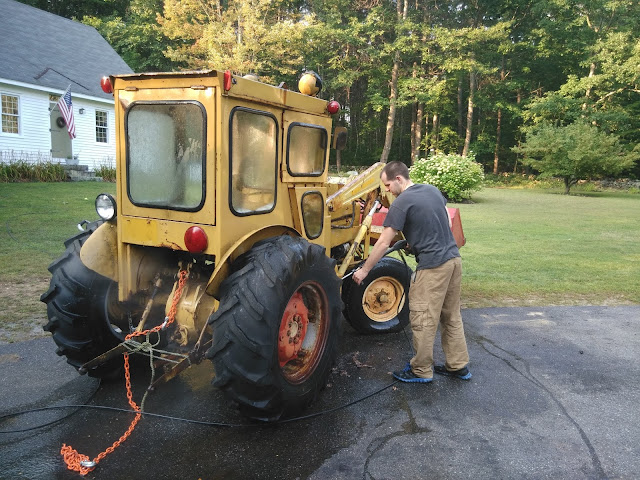 Back at the barn, we hooked up the pressure washer and went to town, blasting off 40 years of grime. The Massey will live in the barn until it's running reliably, at which point we will move it again over to Gavin's house.

I haven't been up North since the eclipse, which is bothering me. I'd like to run all the equipment, and adjust the solar panels for the fall. Necessary projects down south have taken up much of my time.