I have been behind on posts, because I have been busy doing post-worthy things! It's nice to move forward with things, but it's going by in a blur because it's all happening so fast. The next few posts will probably be picture heavy, and light on description, as I didn't sit down to describe what happened while it was still fresh.

A few weeks ago now, I went down to Nashua to buy a Bolens lawn tractor on behalf of my Grandfather. The tractor was listed as a parts machine, but when I got there the seller was cleaning things out with an air hose, had a battery charger on it, and was adding fresh gas. After 20 minutes of tinkering, we had it running on it's own, and it drove onto the trailer. This was one of those craigslist transactions where you wish you could leave 5-star feedback; the buyer and seller both got what they wanted, no petty haggling, everyone showed up on time, etc. 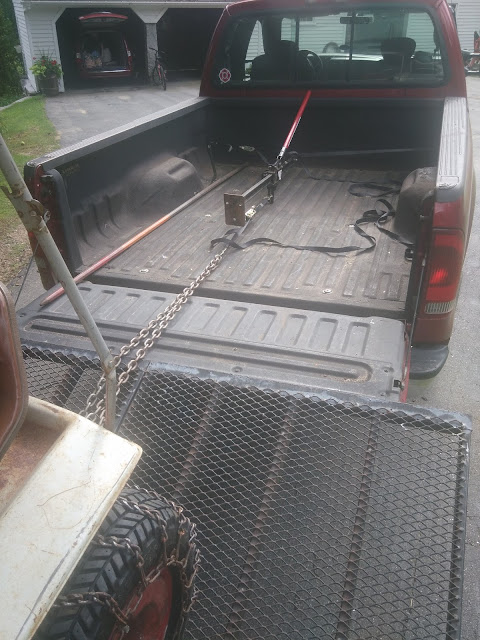 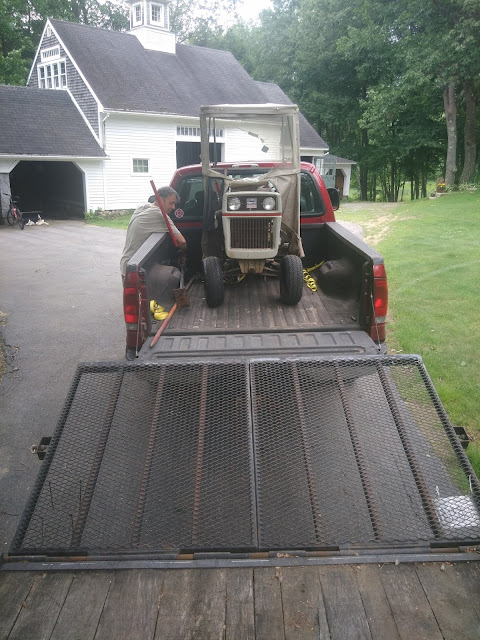 My dad was taking his Kubota North on the trailer, so we loaded the new old Bolens into the bed of his truck by dropping the gate of the trailer onto the gate of his truck, then ratcheting it up with the farm jack. Since it's still running, I imagine my Grandfather will just add this machine to his collection, instead of using it for parts, as any true Yankee would. 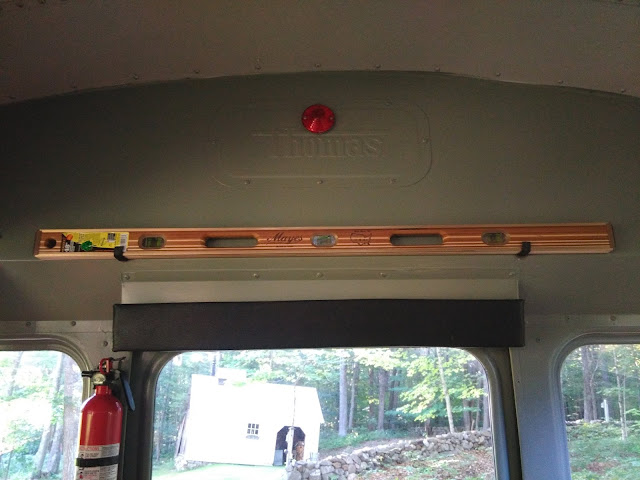 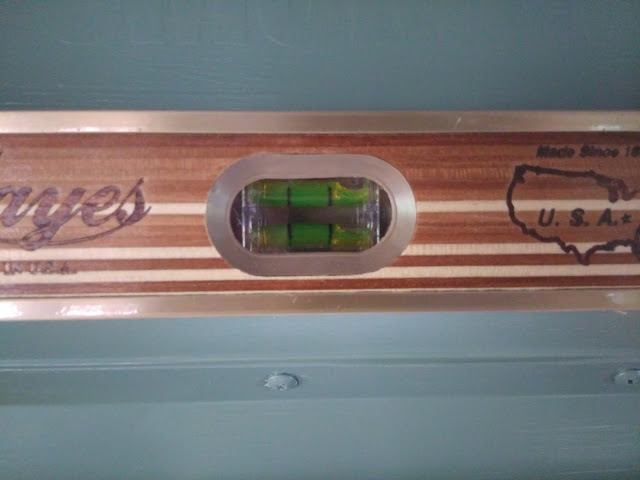 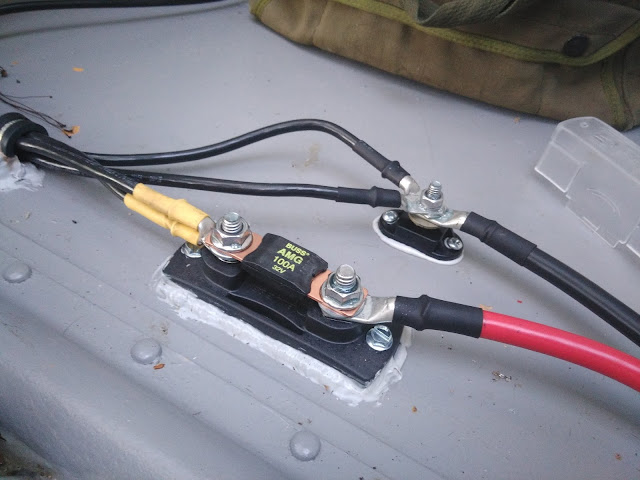 On the bus, I have been tweaking things for the departure North. I added two more tie-downs on the roof, so that a ratchet strap could go over the top of the stowed solar panels for transport. I crafted brackets out of some leftover furniture parts to hold the level, level, on the back wall above the door. So now the level is safe and secure, and still works as a level. I also got a terminal stud for my negative solar power cables (previously the leads were bolted together and wrapped in electrical tape,) and the correct "MEGA" fuse for the positive lead fuse block. 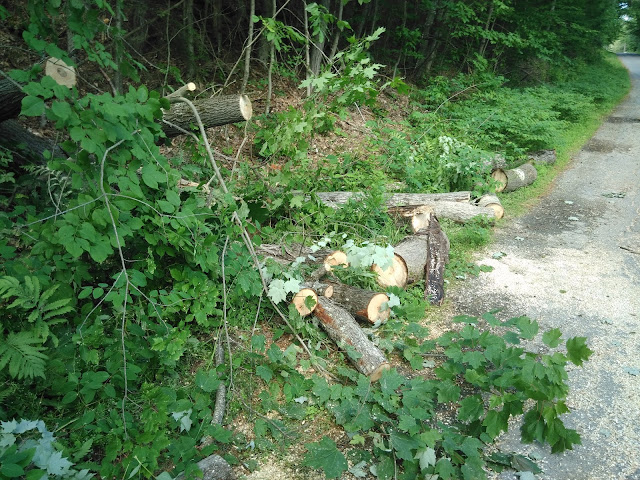 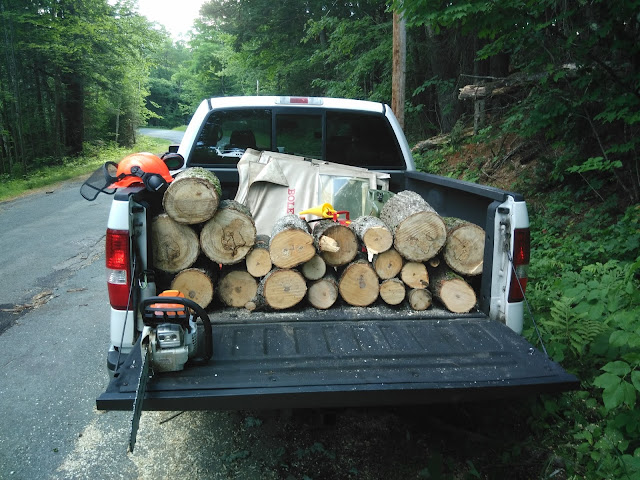 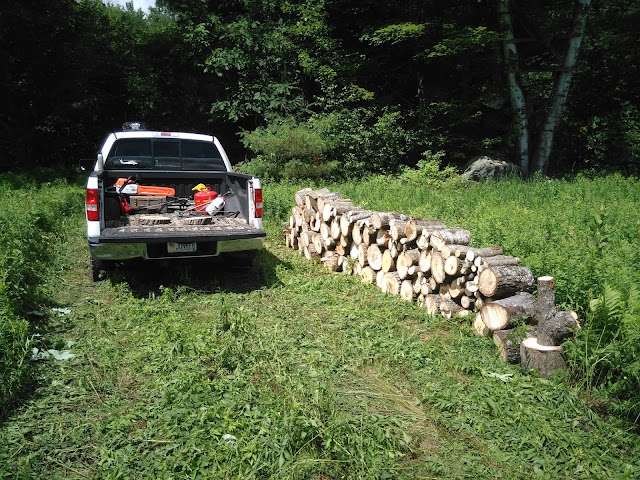 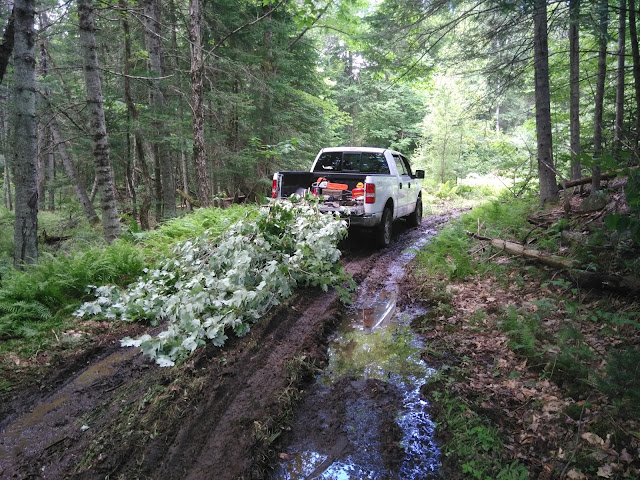 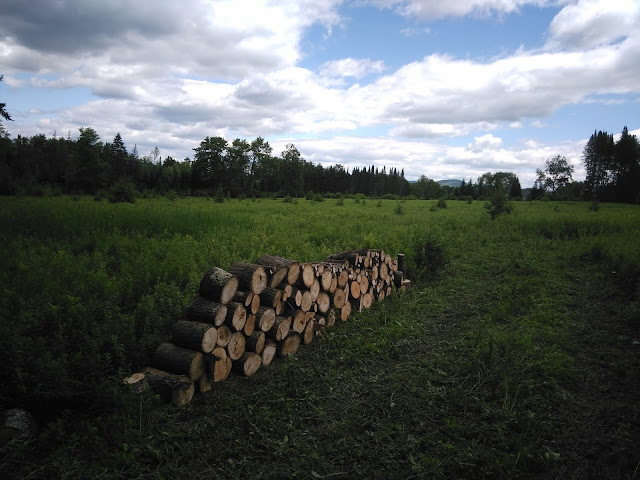 At the property, I cleaned up the remnants of a maple and a poplar which were blown down in a storm. The town had moved the brush to either side of the road, but it wasn't the most attractive, so I spent a morning with the chain saw cutting the remnants into logs, and hauling the brush. This also gave me the opportunity to greet most of my neighbors driving by. I used my truck as a tractor (trucktor?,) hauling two beds full of logs, and pulling several bunches of strapped-together branches through the mucky driveway. I really need a tractor up here. 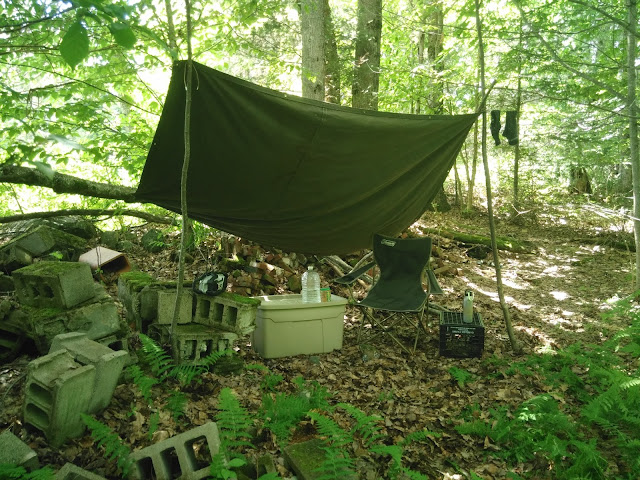 I erected a small shelter, with some simple survival items (hatchet, wool blanket, rice and beans, toilet paper,) just in case. It's also a place to hide from rain showers. More to follow...
Posted by Aaron at July 23, 2017