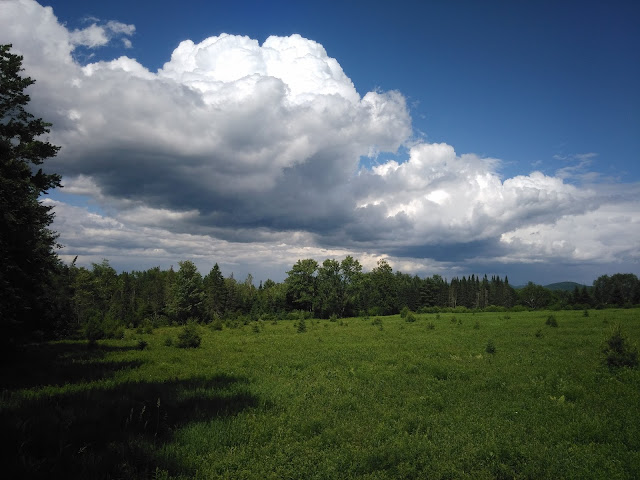 I found it surreal, on this 10,382nd day of my life, to be working a beautiful parcel of land in the North Country of the great state of New Hampshire, on a New England summer day. My dog, Zeke, joined me as we were slowly eaten alive by ticks, deer flies, mosquitoes, and even some black flies. With temperatures in the low 80's, I wore shorts, leaving my unprotected legs well covered in cuts from prickers and jagged edges of limbed tree-branches. Sweat dripped into my eyes, and my glasses stayed foggy after wiping them off.

It was a blast. I was pinching myself.

I worked throughout the afternoon. My goal was to clear the brush around the old path to the field, so that a school bus might fit through. Not just any school bus, though; one covered in latex exterior house-paint, with solar panels on the roof and a chimney sticking out a window. 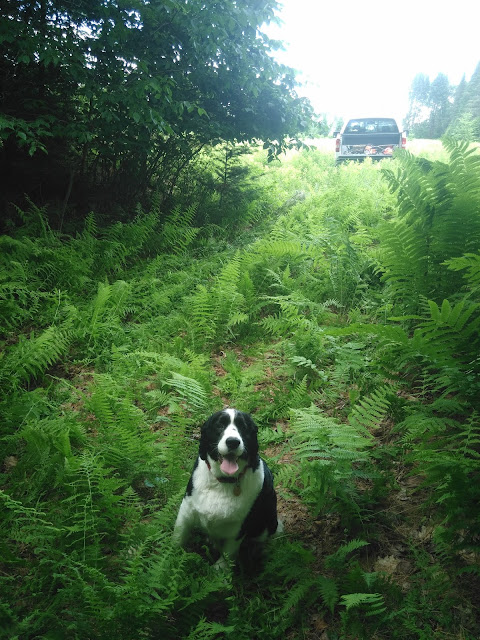 The pickup fit through the path with a few scraping branches, and I parked it in the field of tall weeds. I walked the path several times, visualizing the turns the bus would need to make (or a truck and trailer, for that matter.) I paid attention to the size of the trees; the big old trees weren't in the way, before. All these small trees encroaching on the path were new additions. After some debate about whether it wanted to start or not, I convinced the chainsaw to run (it's a new Stihl! What gives?) and took out a lot of trees in the 1" to 4" diameter range. There were a few nice yellow birches growing up, and I trimmed the brush in a way that these would be more prominent. 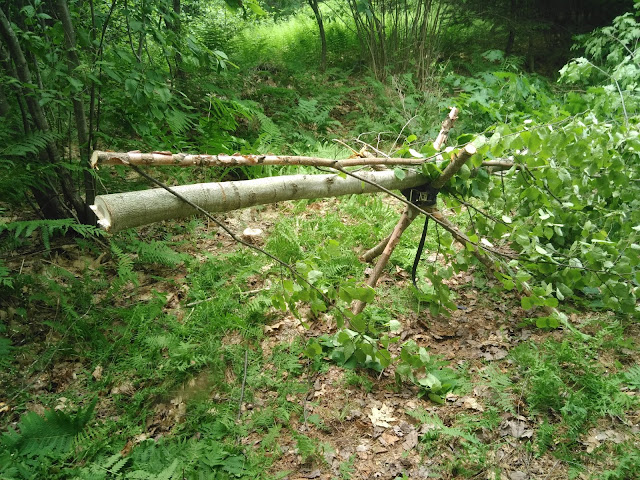 The branches between thumb size and leg size were diced up into foot long chunks, using an improvised tripod fashioned from a yellow birch trunk and a ratchet strap. I stacked the pieces in a pile in the sun, so I can have some good firewood in a few months. I would like to get a roll of clear plastic wrap, and make a little solar-powered kiln. 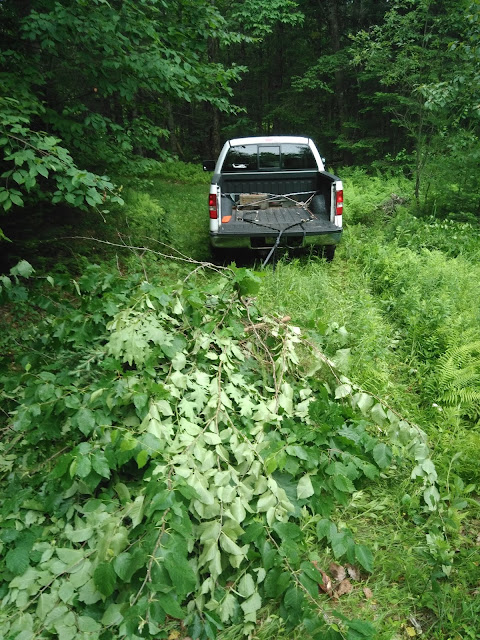 Lacking a tractor on the property at the moment, I dragged my pile of branches down the path with the truck and some ratchet straps. From here I unloaded them into a brush pile that felt a lot bigger than it looks... 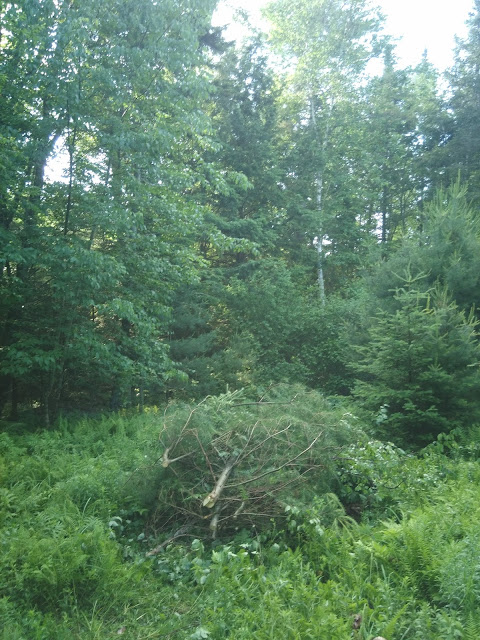 It feels about four times that size... maybe more... that was a lot of brush!

Zeke and I took off on a walk around the property. The Spaniel enjoyed the stream. 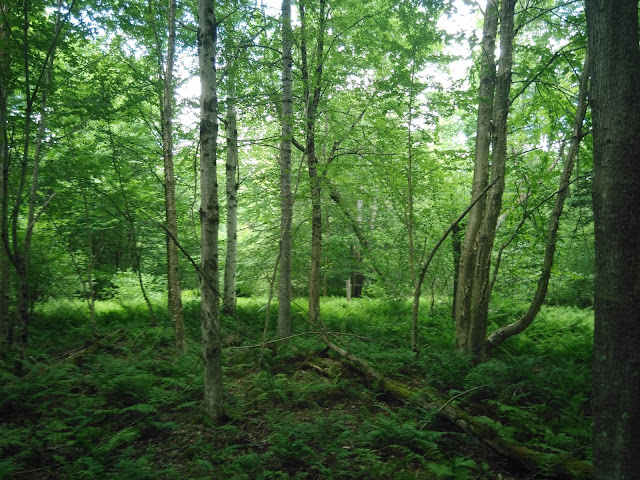 A lot of the trees on the southern edge of the woods are yellow birches, with a good amount of white birches and sugar maples. 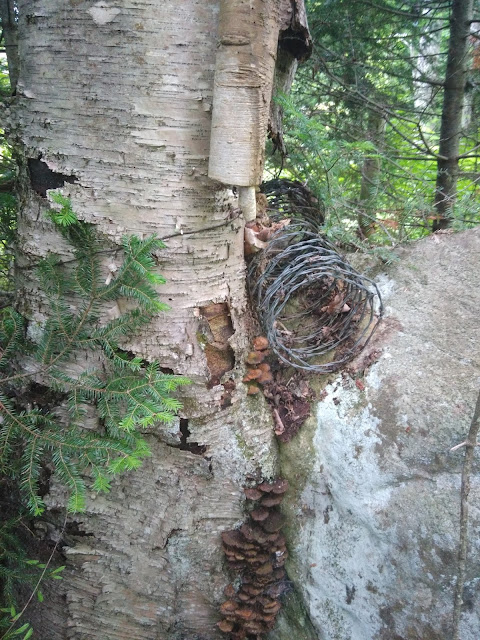 We found several artifacts of human settlement on this old patch of dairy farm. Here, a birch and a rock meet, Mushrooms grow at the junction, and a spool of barbed wire rests on top. 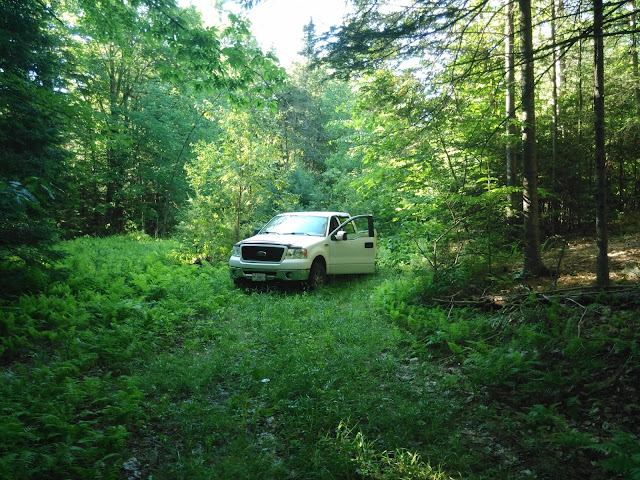 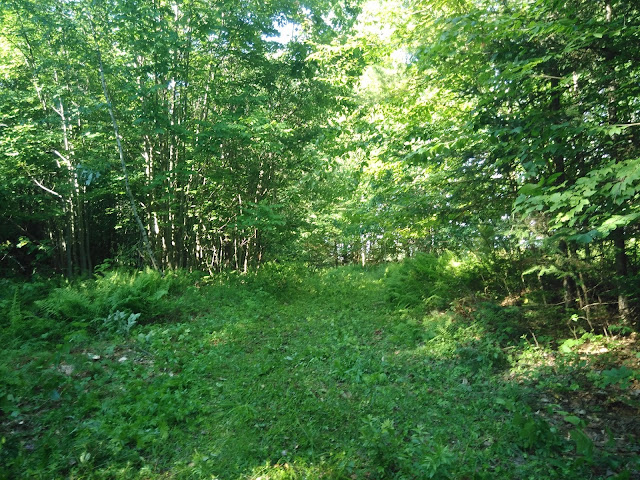 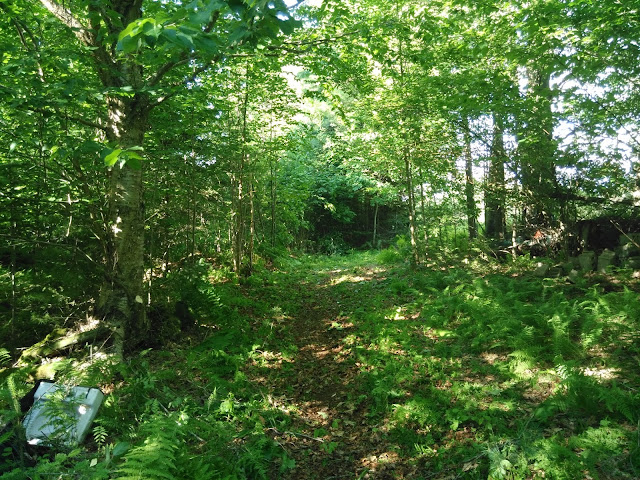 With the brush out of the way, and small branches trimmed, the path was open again. If I don't get pulled over and impounded, and if I don't get stuck in the mud at the start of the driveway, and if the bus can make the last turn into the field at the stonewall... I should be able to get the bus in no problem! 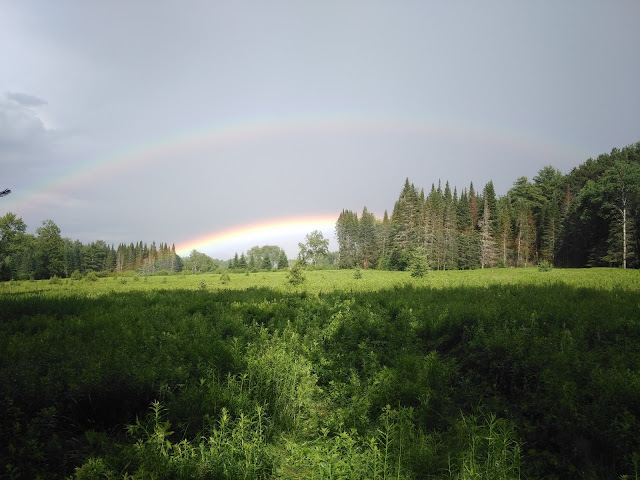 Woods, field, stream... I would say I've found the pot of gold here in the North Country.