Some much-needed leave was taken from work this week, in order to decompress and work on the projects I've had on the back-burner for months.

First up is the bus's solar panels. Some kind of phantom load is draining the batteries (two fresh ones, at that) so having panels operational will be a huge help in the field. As mentioned months ago, these six Siemens SP75 Panels will provide sufficient amperage to recharge the big bank of T105 batteries. Currently the bus has two "normal" diesel truck batteries; so the system will have no trouble keeping that smaller bank charged.

On the roof, I pondered for a while what the best way to mount the panels would be. I already had the base of the panels mounted on the edge of the roof; I wanted to finish building a set up that would allow me to change the angle of the panel to track the seasonal sun, but at the same time avoid perforated angle monstrosities. I wanted a design that could withstand strong northern winds when the panels are angled high in the winter, and easy to move every few months.

Before I get into the nitty gritty of "how" I did this, I'll give you, dear reader, the "why." Summer days are longer than winter days. In the summer, the sun rises in the northeast, climbs high in the southern sky, then sets in the northwest. In the winter, the sun rises in the southeast, stays low in the southern sky, and sets in the southwest. To capture the most amount of sun on any given day, the panels should be aimed true south, at the highest angle the sun reaches. This is where it gets cool; you know how the Earth rotates on it's axis about 23 degrees (hence seasons?) The angle of the sun at noon is just the latitude line you are on, plus or minus 23 degrees for the season. For me, I planned on the bus being up North; 45' Latitude gives me about 68 degrees in the summer, and 22 degrees in the winter. I need to make a mount for my panels so that I can move them between 22 degrees from vertical on the winter solstice, to 45 degrees on the spring equinox, down to 68 degrees on the summer solstice, then back down to 45 degrees for the autumn equinox.

The panels were already wired in groups of three, which I kept together for the install on the roof. Panels 1 & 2 feed into 3, which has the output wires. Likewise, panels 5 & 6 feed into panel 4. With aluminum scrap I mounted the tops of panels 1, 2 & 3, and panels 4, 5 & 6, together. Now I have two banks of three panels. Not only is lifting three at a time much easier than lifting all six, but I could take one bank "down" for maintenance while the other one keeps collecting rays at half power. 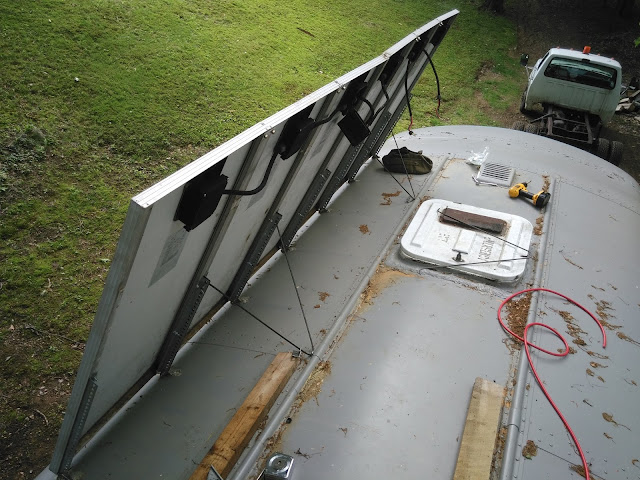 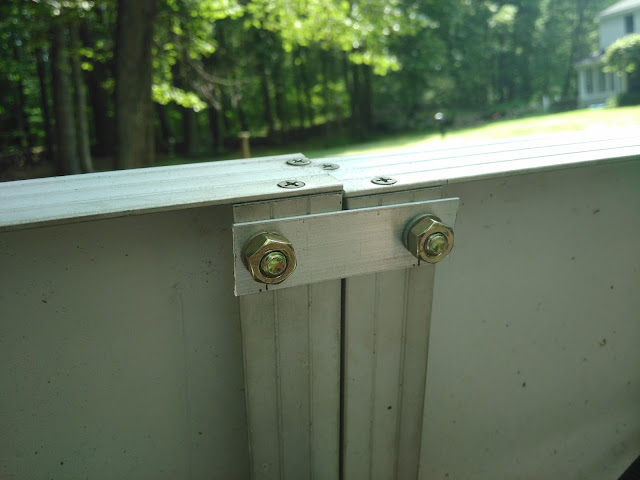 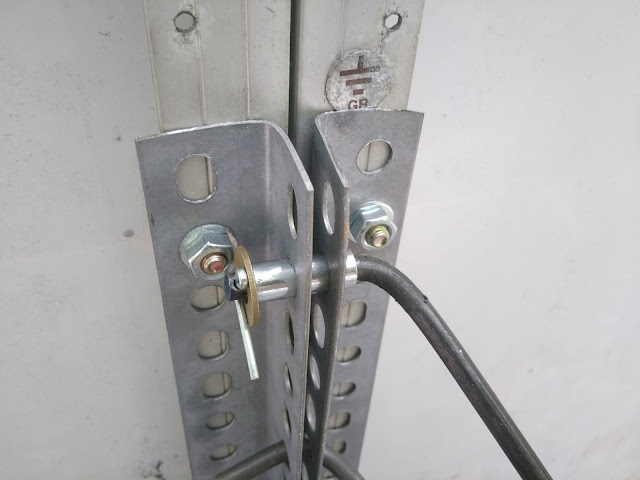 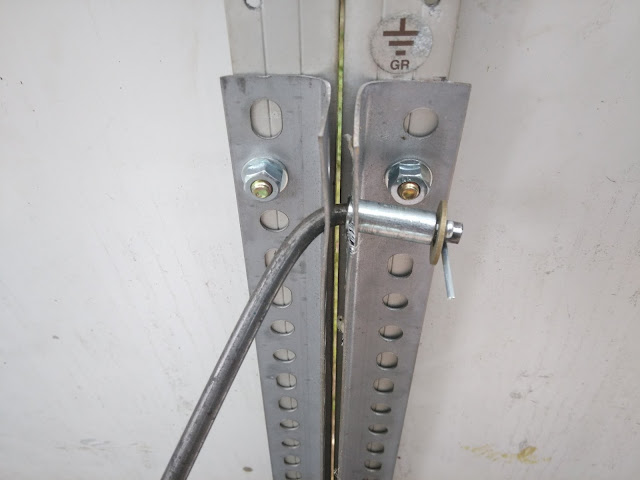 To keep a clean, low-drag appearance, I used 1/4" steel rod, bent in a vise, to prop up the panels. At the ends, and center point of the rod, I slid on 3/8" OD spacers. I mounted a perforated angle mounting foot at the center bushing of the rod. At the very ends of the rods I drilled holes for cotter pins to keep the rods bent "out" where they meet the perforated angle on the panels. It turns out I didn't think that one through, though, as the heavy panels do a good job compressing this springy rod, making it sit at the bend, not at the bushing. Reality wasn't agreeing with my design! I think I have a fix for it, stay tuned... 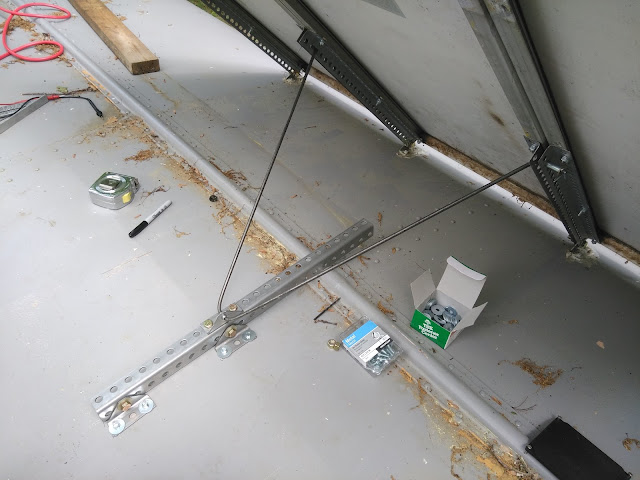 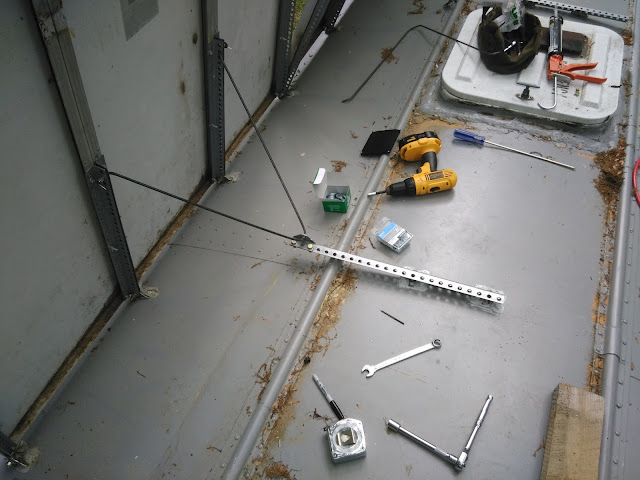 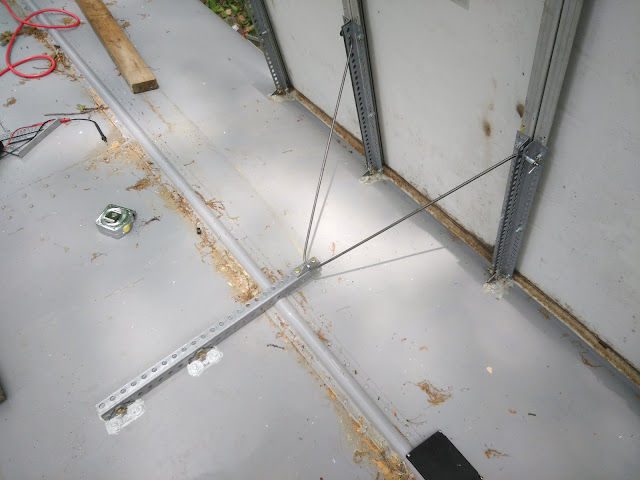 I cut a fresh piece of perforated angle into 2' chunks, then used the remaining perforated angle "feet" I had crafted months ago, to mount the chunk tangent to the bus roof. That one sentence summarizes hours of work sketching, observing, and playing with the parts I had available. I doubled up the mounting feet, as the loads are not just "down" on this piece, but in, out and up, depending on what "season" the panel is mounted in. The feet were all mounted by drilling starter holes in the roof, applying a liberal amount of RTV, then screwing in sheet metal screws. 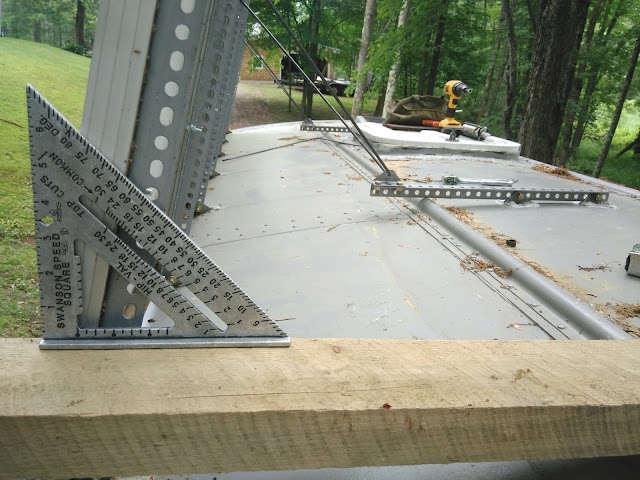 By removing the two bolts, the angled foot of the bent rod can be adjusted up and down the length of the track, giving me something like 12 degrees "full out" to about 75 degrees "full in." In theory, I could adjust this as often as I want to in order to keep the panels facing the sun. 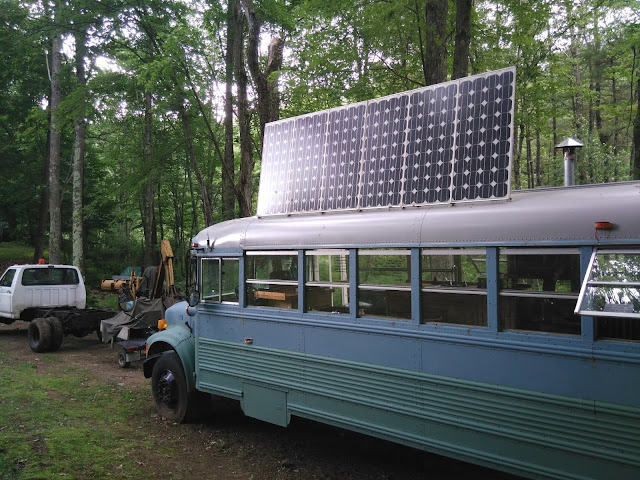 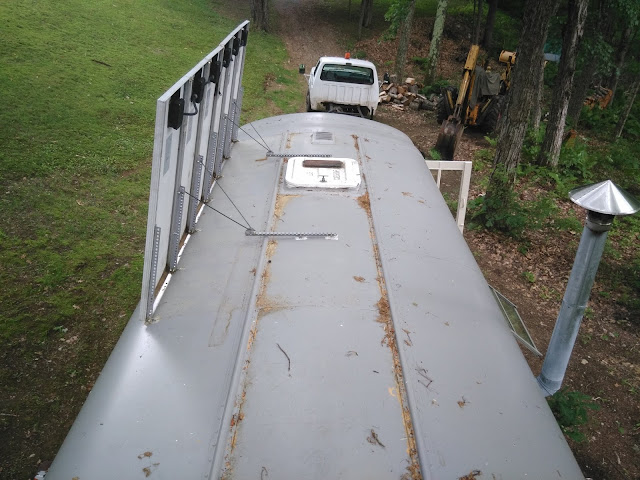 Both banks in the full out position, gathering some non-existent eastern sunlight! Given the shape of the parent's yard, I don't think I'll really be able to test this system until I drive it up North and park it in a field, with the panels facing South.

I love the asymmetric look of the roof, with the chimney. If you like asymmetric, utilitarian vehicles, you might be a helicopter mechanic... 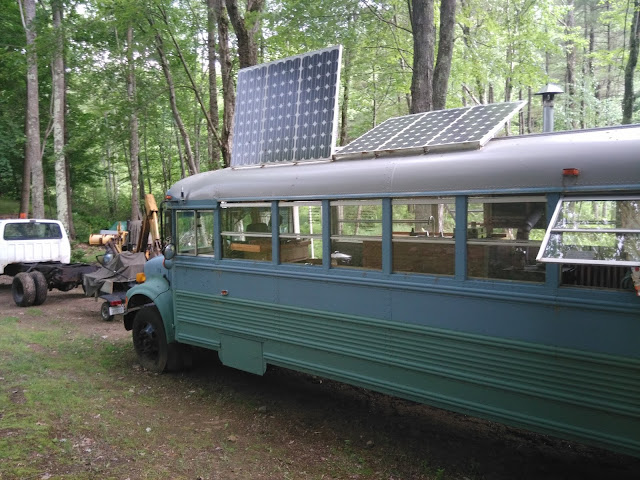 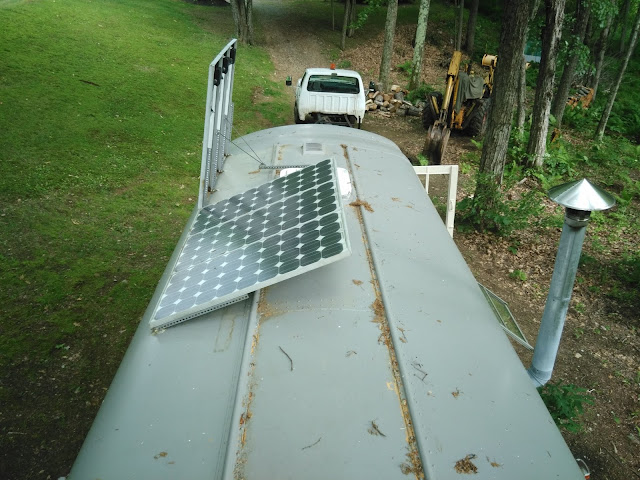 Aft bank in the full down position. I was trying to get the front bank down as well, but the support rods were pushing past the bushings, as mentioned earlier. I think I can fix that by keeping tension on them with a line of lockwire.

Tomorrow, I think I will continue this project with the solar panels-to-bus wiring, the installation of the Tristar charge controller, and the repair of the "DC battery bus" after I inadvertently pulled out a plug.

I will leave you with Day 10374's project; removing the old engine oil filter from the F350. It's all that I accomplished that day. It was brutal. 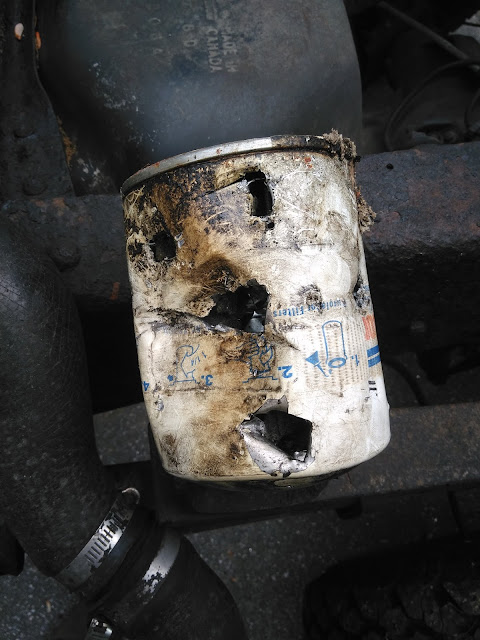