Since last post I have spent a few weeks in Pennsylvania, a few weeks in Virginia, and now I'm back in Pennsylvania; all for Army schools. One of the road trips turned into an odyssey; engines refused to start, patience was tested, the go-bag and boots were utilized, foreign foods were tried, and much later a chicken was murdered by a friend.

To start us off, my venerable F150 is showing it's age. In Pennsylvania I heard a BANG followed by  the snap of compressed air in time with the engine. The engine was making a decent side-to-side vibration. I thought I blew off an exhaust manifold. I opened the hood to troubleshoot, and the problem wasn't immediately apparent. I wasn't getting any codes on the Scan Gauge, reinforcing my thought that it was exhaust related. But why do I smell fuel? Everything appeared fine... all the spark plug boots were installed. I called around to find a shop to fix an exhaust, and with a buddy in his car to follow me on a noisy trip, it finally coughed up a code for #3 cylinder misfire. A-ha! 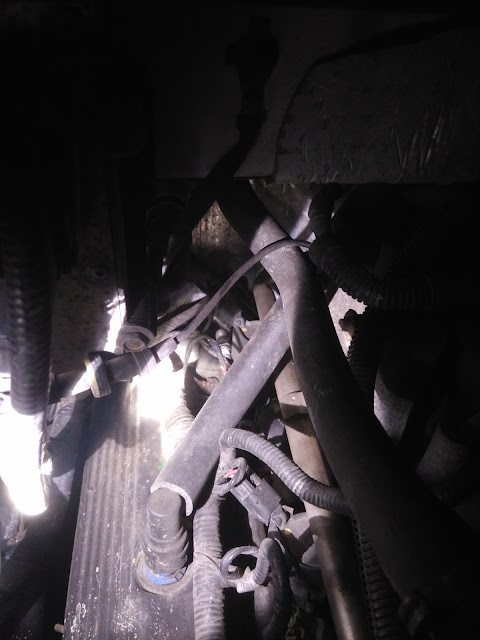 I popped the hood one more time, and found the spark plug still sitting on the top of the engine (two inches right of the bright flashlight spot; see the ceramic?) The engine had ejected the plug from the aluminum head, tearing the threads out.  The spark plug boot dropped back into place. That's why I had smelled fuel. A quick google revealed this as a common problem with the Triton V8's. Next call was for a flatbed, and another call to a nearby Ford dealer. After a helicoil install, my truck was back on the road. The Ford Dealer got my travel pay.

Telling this story at work, Ed the former-Ford mechanic told me about some of the other common problems with my model year. This conversation would haunt me days later, hundreds of miles away. Driving to Virginia in the rain, my engine died in Delaware on Route 1. It would eventually restart, run rough, and die. I called AAA. 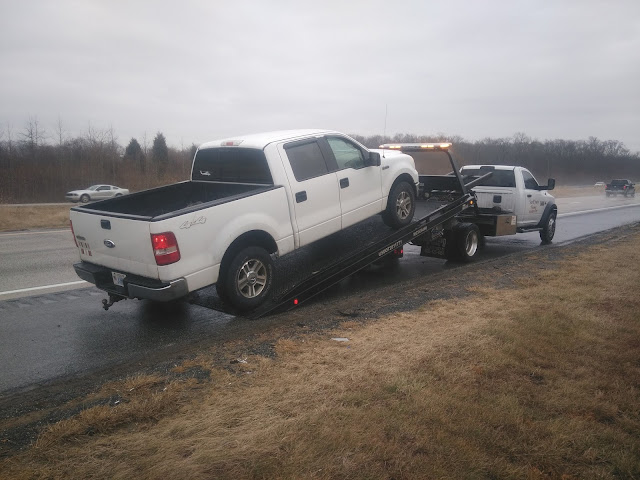 On a Sunday afternoon, the only open shop nearby was a PepBoys. The truck started, and the test drive was fine. A crusty mechanic with a cigarette hanging out of his mouth told me it was the catalytic converter clogging up, choking the engine as it got hot. Here's some zen; vehicle maintenance isn't cold logical diagnosis, it involves a lot of feeling and establishing a relationship with the vehicle. How did it stop working? How has it been acting? What were the conditions? The person operating the vehicle knows these conditions and feelings better than anyone. A good mechanic knows what questions to ask. It wasn't running rough; it just died. I had air, I had spark, I had crank... it must be the fuel. But again, I didn't have a code yet. PepBoys wanted to cut the welds on the catalytic converter, but they wouldn't be able to weld it back together until the next day. It was now running fine. The rain had stopped. I asked for my keys back and kept going South.

An hour later it started bucking occasionally. It had started raining. Finally it died again, and I pulled off to the side. I gave it 15 minutes to sit. In that time I put my phone up as a hotspot, and used my laptop to look around the area. I was three hours from my destination, and at this point, exhausted. There was a town 25 minutes west with a Ford dealer and a motel within walking distance. If it started, I would keep going. If it didn't, I was calling it a night. I called home, called my platoon sergeant, called the school. After a good wait, I tried to start it... the engine caught, ran rough, died, and gave me a code! Low fuel pressure. I called AAA, again. Lenny and Debbie gave me and my disabled steed a ride to Salisbury, MD. We talked chicken farming. Lenny even gave me a ride to the motel; what a guy! 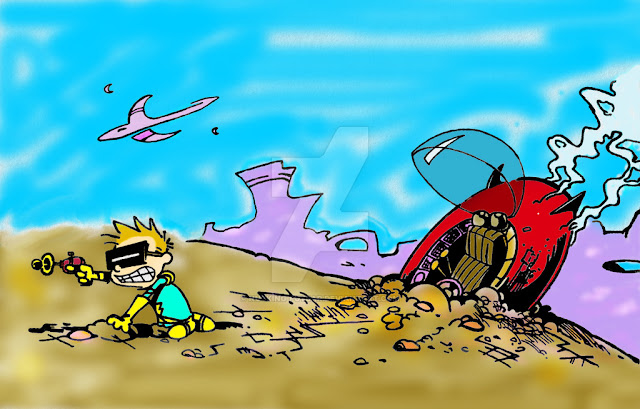 ( credit to Bill Watterson, and "Nucking Fut-bar" on deviantArt )

So there I was; down to my boots and my backpack in a random eastern shore town in Maryland. I checked into the motel, then hoofed it back to the dealership to get food, coffee and a change of clothes from the bags buried in the back of the truck. Like Spaceman Spiff ship-wrecked on a deserted world, I took stock of what I had. Google revealed the only places to eat within walking distance were food-tainment (you know, I can microwave my own food for a lot cheaper) ... except an Indian & Pakistani restaurant down the road. Had I had it before? Nope, but I liked some of the Afghan dishes! I set out on foot. I got some rice and vegetable dinner that was very good despite being full of curry. I enjoyed a conversation with the waiter, who was NY-born and Pakistani raised, about travelling and eating food around the world. I passed out around 7:30pm. 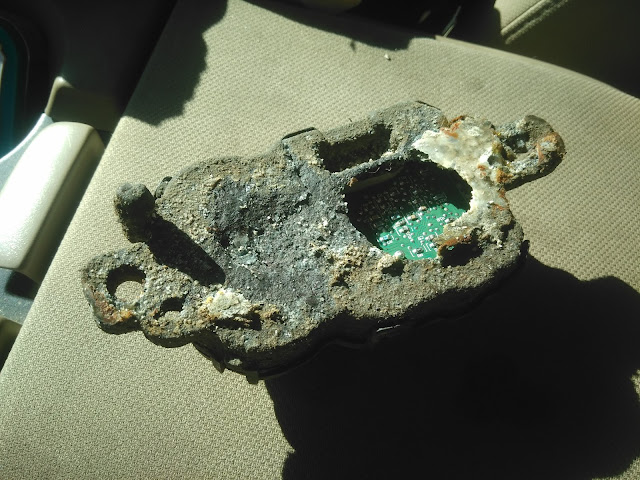 The dealership rolled my truck in the next morning. I set up camp in a lobby blasting classic rock hits that put you in a car-buying mood. The dealership replaced the fuel sender (which is what Ed told me to check out several days prior,) and I was back on the road. The Ford Dealer, again, got my travel pay. The fuel sender, located above the spare tire, rots out on these trucks and exposes the circuit board to the elements. When it got wet it stopped working. What a great design. I would not buy one of these trucks again. I wouldn't buy anything with a computer "smarter" than a pocket calculator.

If I was to make the curriculum for the aviation maintenance courses I was attending, then coordinating the repair of a vehicle in extreme conditions far from it's support base, while still accomplishing the mission would be one of the most important things to know. I'd like to think I crew chief'ed the situation quite well.

These two adventures, and three tow-truck rides in a month's time, have encouraged me to step up my search for my next vehicle. I need a pickup, but after reading Mr. Money Mustache's article "What does your work truck say about you?" I want to go down a size for something with better mileage. I also want something I can actually work on, not something designed for a dealership. I may have found that truck here in Pennsylvania, we shall see.

While in Pennsylvania, Tyler of Kentucky and Caleb from Ohio and I attended the Farm Show in Harrisburg. This was a huge event. I saw more people in that building that afternoon than I had seen in all of New Hampshire over the past year. The vendors didn't disappoint, and we left with lots of good food. I have a nice hand-made birch mixing spoon for the bus, now, too.

In Virginia I went to Williamsburg, which allowed me to escape the suburban sprawl of Hampton Roads, and walk around a nice New England-esque town and smell the sweet smell of woodsmoke. I paid attention to how the buildings were constructed... how the timbers were set, how the trim was laid, and where the chimney was (keeping in mind that English style woodstoves are usually very inefficient.)

The day before I got home, Roy Orbison the rooster was mauled to death by my cute, cuddly, and otherwise harmless Springer Spaniel. My domestic untrained bird dog really likes killing my domestic birds... Roy died protecting his flock. Luke at work had asked if I wanted one of his roosters several weeks prior; I texted him back to find out he had lost most of his flock to a wild critter.

If any aspiring chicken farmers have recently lost a chicken to a predator, and are wondering when the pain and sorrow will end, I can tell you that after losing your seventh chicken the reaction is about 1% of the emotion invested into the first one. I liked Roy the rooster... but I'm also getting used to chickens dying very easily. Did I mention none of the new hens have names? Much easier this way. Working with Zeke to increase discipline around the chickens.

I went to craigslist and found a free bantam rooster in need of a home, after it's hens had been taken out by a possum. Apparently possums, known for playing dead, also kill chickens. The family I got him from had small kids who named the rooster, appropriately, Woof. 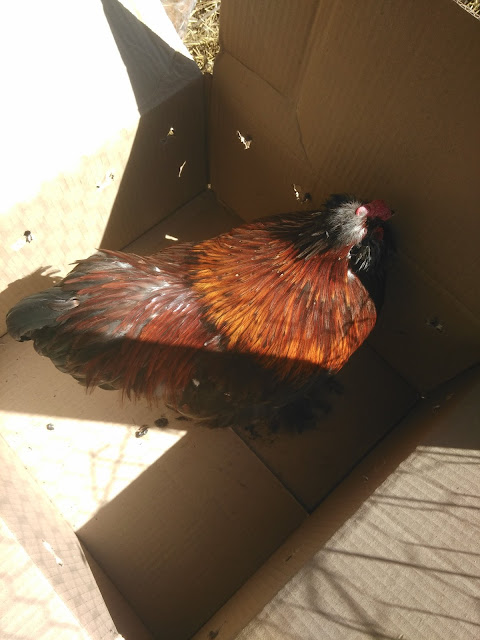 Woof, being a cool customer, and possibly the friendliest chicken I have met, got a ride home in the front seat of the truck, in a cardboard box. I introduced him to the hens thinking they would love a new friend, and was quickly appalled at the law of the jungle in an 8x8' wire enclosure. The hens had poor friendly Woof bleeding and hiding in no time. 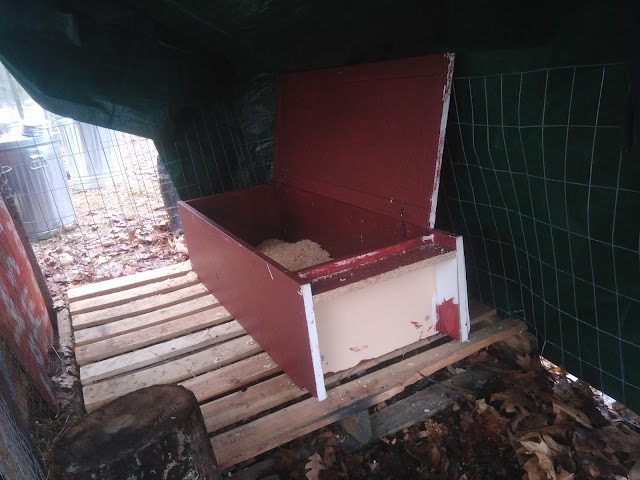 I separated them, and with the help of Mom, built another coop enclosure off the back of the run, where Elvis "Woof" Presley could heal up and not be hen-pecked to death. We used a tarp, a pallet, dog food dishes, and a particle-board cabinet turned on it's side. He got his very own roosting stump and branch.

In the barn, I'm working on cleaning up and inspecting the solar panels. Much more to follow on that in another entry. 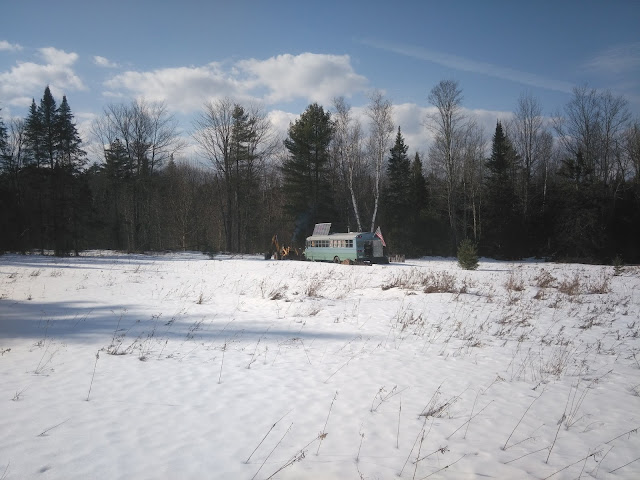 Zeke and I took a much needed trip up to the land on a warm afternoon. There was still a foot of snow on the ground, and it was about 50'F and sunny in the way that a plaid shirt is the only extra layer needed. Both the bus and the backhoe started right up after sitting for more than two months. I'm equally impressed that the ancient diesel in the backhoe with no glowplugs, and the modern Powerstroke diesel in the bus with all the computers, both started! 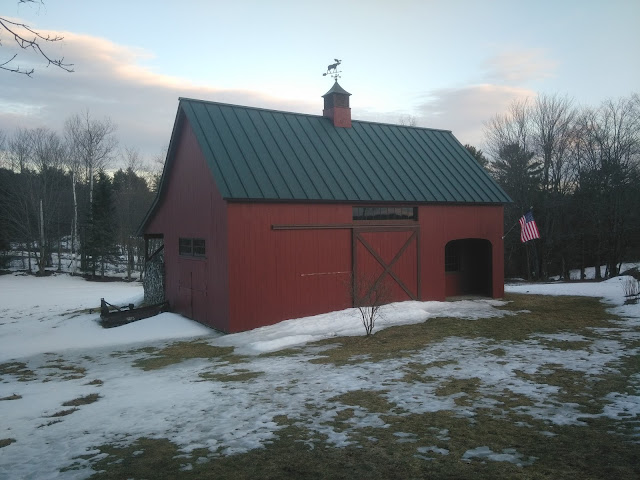 In town, my grandfather showed me around Dave's sugar house, which he had helped build. He explained to me how the foundation was poured, how the walls were built, and how I could do something similar. The design is coming together. 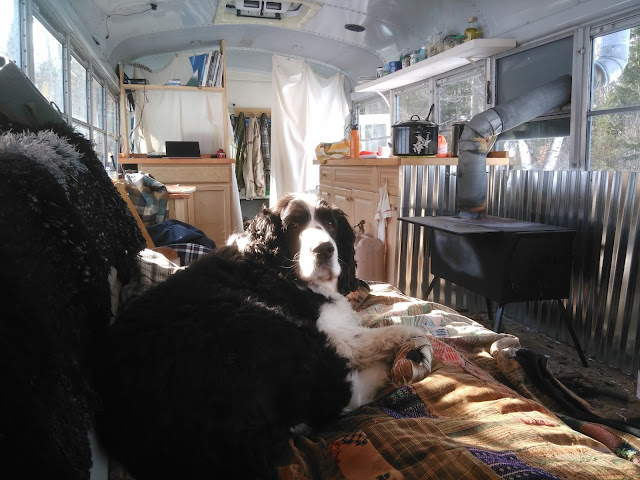 Zeke and I went for a walk, then lounged out on the futon for about an hour. I forgot the mousetraps.
Posted by Aaron at March 04, 2018