Hello! A few updates for my readers... 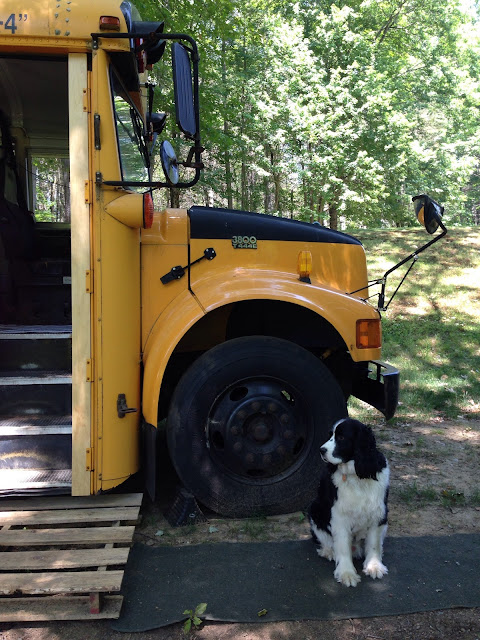 While working in the bus during a rain storm, I marked where all the drips were coming through the ceiling. I had a few pop-rivets leaking, as well as the seal around the forward hatch. I sealed up what I could with RTV, but another shower proved that the seal around the hatch would require more attention. For water-proofing, the hatch has factory-installed tape, a thick layer of cracked sealant applied by the school district, and my judicious application of RTV. None of these measures have kept water out, so I went with a scorched-earth policy and a liberal application of rubberized undercoating. I burned through an entire can, putting three thick coats on the seal around the hatch. Now I'm just waiting on some more rain to see if it will keep water out.

Is it really undercoating, if it's on top? Overcoating? Think about it. 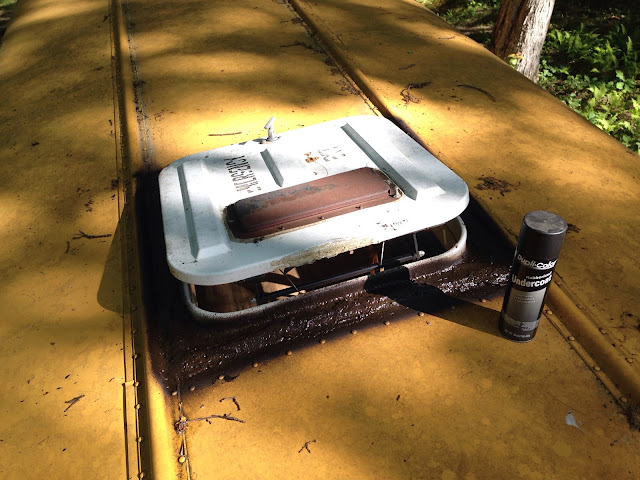 Going through the hatch is like climbing out of the conning tower of a U-boat. A yellow U-boat... in the woods... 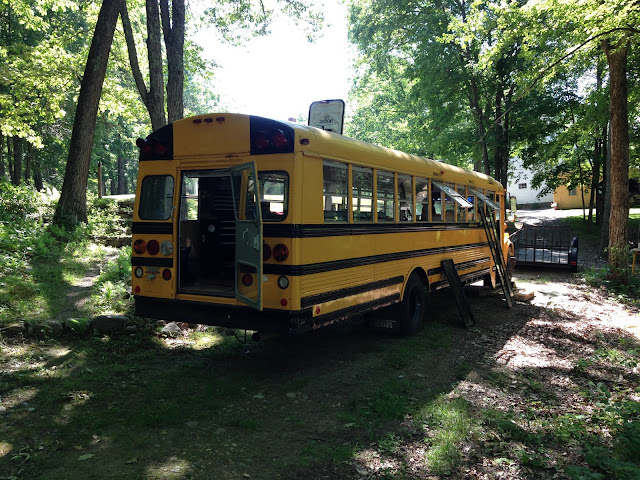 I spent some time last weekend, on Day 10011, moving some poplar logs at the camp up north with my grandfather. We used dad's tractor as a skidder. The backhoe is a great tool; it's a crappy cable skidder, an awkward crane, a clumsy bucket loader, a poor excuse for an excavator, and a horrible bulldozer. You can do anything with it! A veritable Swiss Army knife of a machine. I learned a bunch of new tricks and techniques from my grandfather, which I will surely apply in months/years to come. 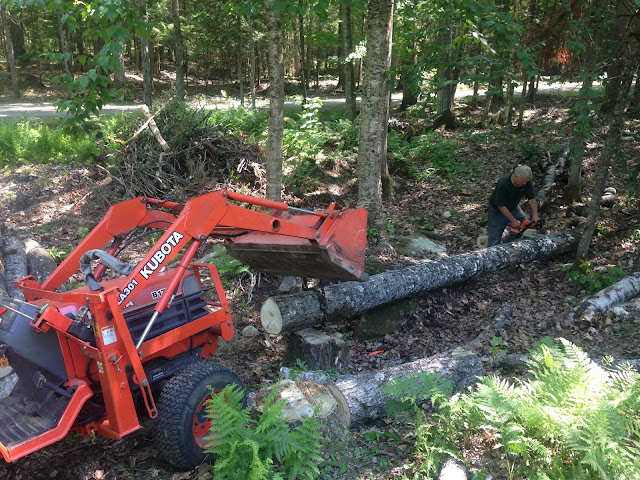 After some deliberation, I figured out how I would put curtains in. Instead of trying to bend a bar to match the ceiling's curve, that a typical curtain could slide on, I removed panel screws from the ceiling and threaded in eye-screws.

"Not to be used as a chisel, punch, or prybar," said the screwdriver. Ha! 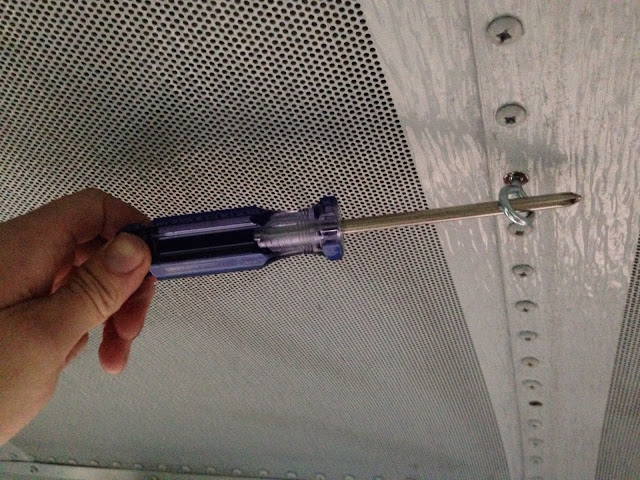 I ordered a pair of cotton duckcloth shower curtains (Made in USA, of course,) which have metal grommets every few inches, instead of a sewn fold which a curtain rod would go through. With a pair of snapring pliers I spread the eyelets to accept the grommets. I can easily open and close the curtains by latching and unlatching the last grommet on the curtain from an eyelet.

I ordered two curtains to start, which I installed halfway through the bus, but I will probably get another pair to separate the cockpit from the cabin. This set of curtains hangs between the beadboard and barnboard on the wall, and separates the kitchen from the bedroom. 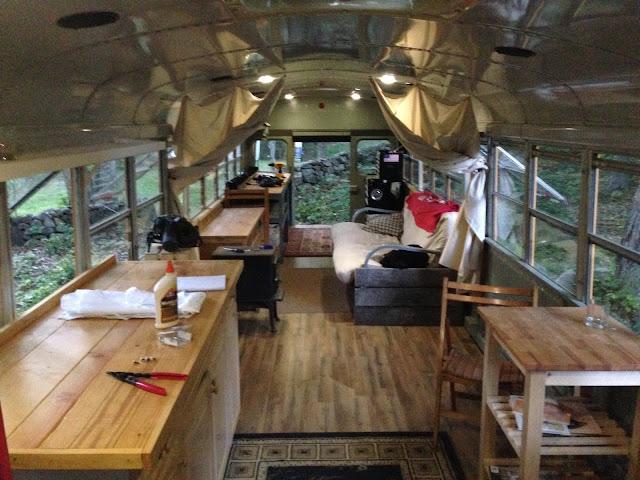 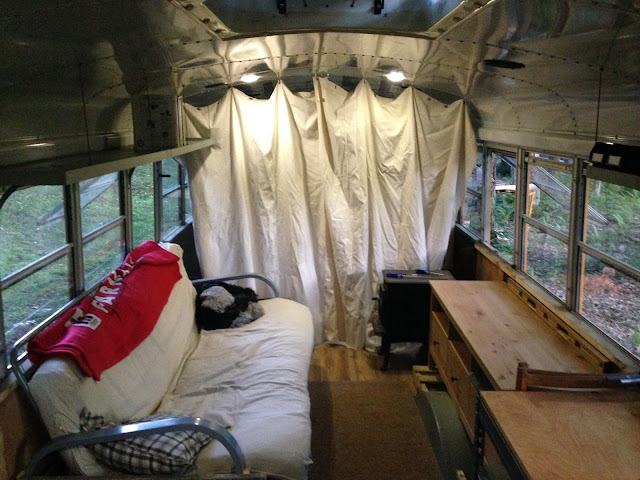 The pace of work has been noticeably slowing. While sitting on the futon, contemplating, I came to the realization that I was past 80% on the interior. It's "done." One of the policies of Lockheed's "Skunkworks" team was to build good-enough 80% solutions; striving to achieve perfection on the last 20% of a project takes just as long as the first 80%, and is just as expensive. They would use a part off-the-shelf if it was available, instead of designing a new component to do something on their aircraft. The proof that this works is in the U-2 and SR-71. The 80/20 rule is something I've tried to capture in the "it's not the space shuttle" philosophy to building.

So while the bus interior isn't climbing above the USSR or busting Mach 3, it is pretty comfortable. 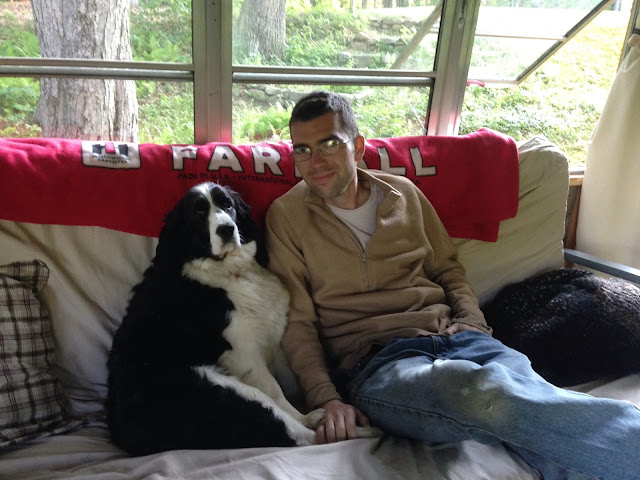