I know I left you with a cliffhanger; a trailer loaded for a trip to the junkyard, and an imminent departure to Louisiana for more Army training. This post will be pretty image heavy, as I catch up on two months of small projects. 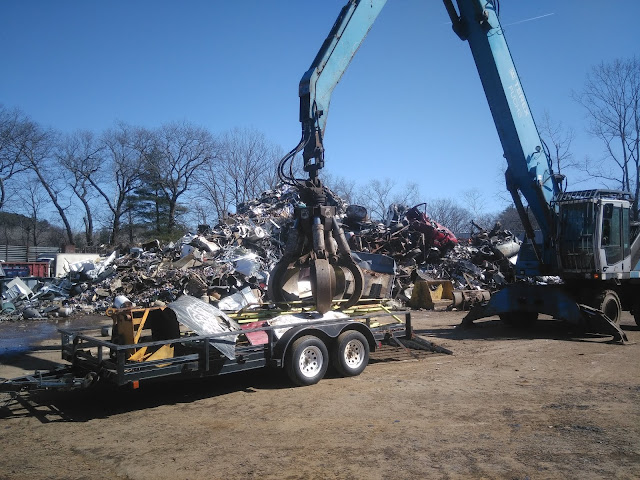 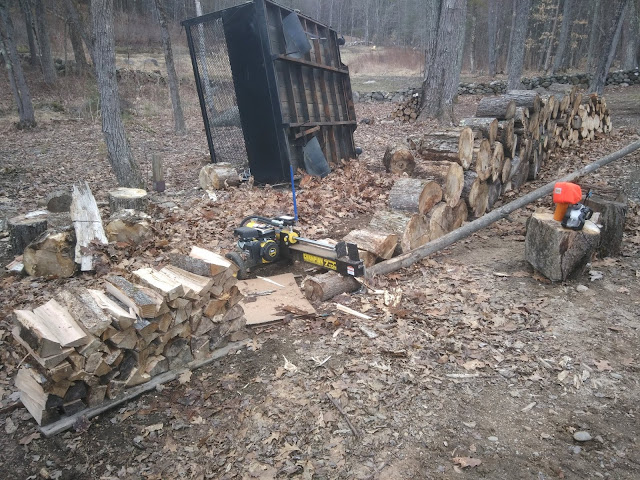 I almost split an entire cord of wood before I left for Louisiana. The cheap-o splitter is a trooper. Having a smooth, safe workflow to compliment the machine's performance saves a lot of time and energy. I use a 6" chunk of 4x4 post to expedite the split, and push the log farther into the blade before the piston reaches full extension. 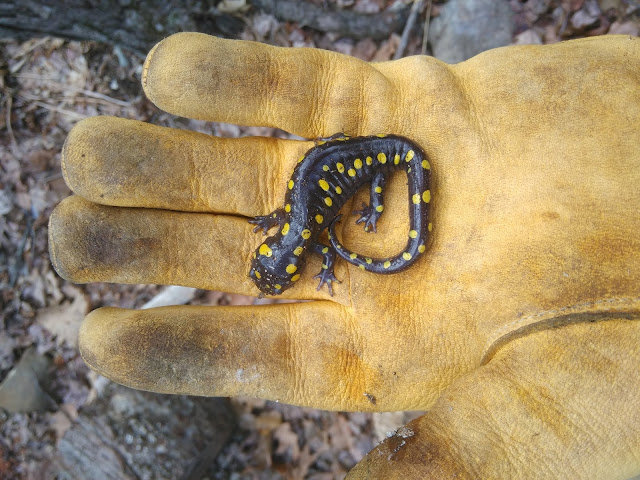 I made some friends while moving logs. Ambystoma maculatum. 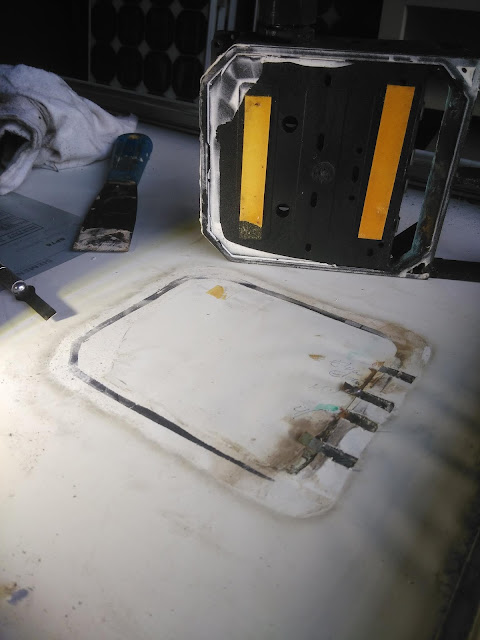 Before I left I was able to get all but two of my corroded panels repaired, and I finished those two up as soon as I got back. I peeled up the junction boxes with a thin putty knife, to cut through the silicone and double-sided tape. I trimmed the backing to expose more of the terminal wire using X-acto #11 and chisel-tip blades. The adhesive would blister up off the metal when rubbed with the butt of a file, so the solder would get a clean connection. 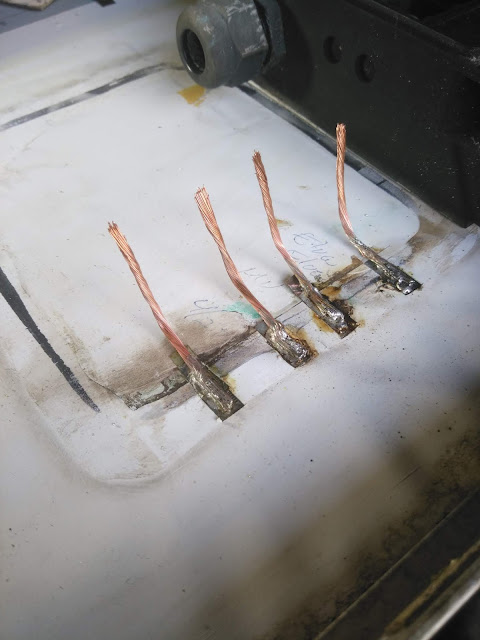 Then I soldered some 12 gauge wire in. I pulled the sheathing off while they were still warm. 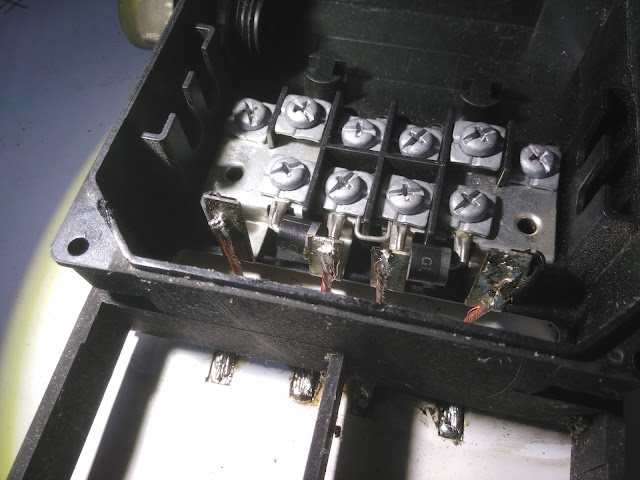 The junction box was then carefully dropped in over the tip, and the four leads were soldered to the terminals. The box still has some play, allowing me to get in with a tube of silicone to reseal it to the panel. In total I soldered 6 panels, bringing them back to health. They're expected to make a full recovery. 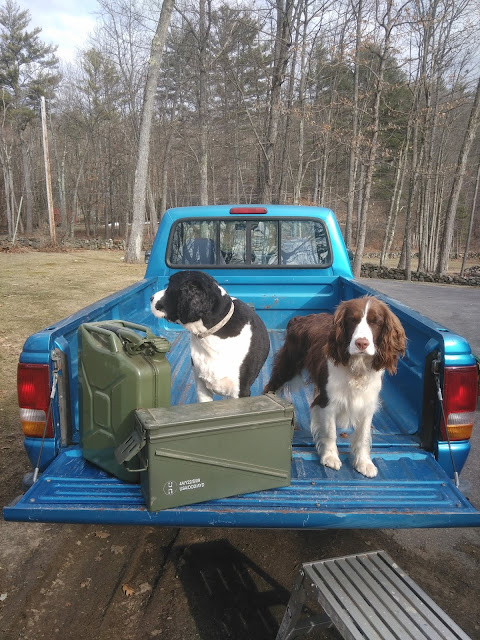 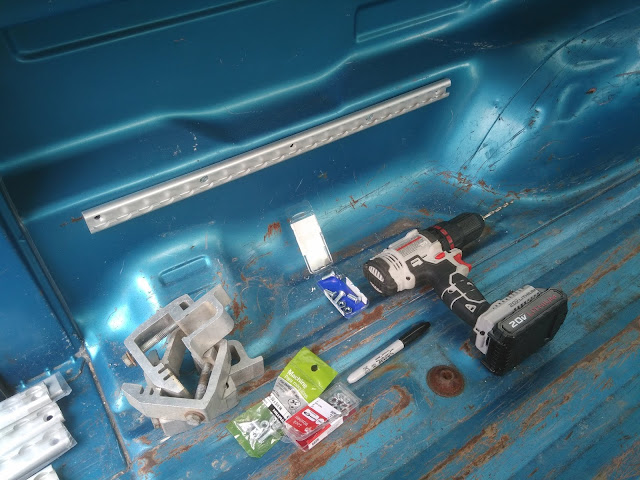 The Ranger got the deluxe treatment; I installed several pieces of L-track along the sides of the bed for securing cargo. I learned from doing this on the F150, and from working on our aircraft, that if they are on the floor they fill up with sand and small rocks. Keeping them sideways and elevated will keep them clean and easy to use. I drilled through the bed sides, watching out for the fuel line, with the drill. I had to make two trips to the hardware store, as the 1/4x20 hardware I had picked out doesn't sit completely flush in the L-track's countersunk holes. L-track from US Cargo Control needs M6 metric hardware. 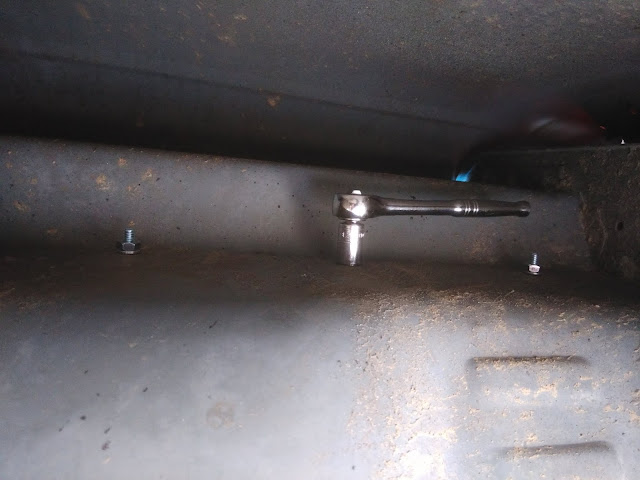 My favorite part of mechanic yoga is getting dust in my eyes while I'm squinting into the darkness trying to snug down a nut. Thankfully, the Ranger's bed is very easy to access from underneath. I couldn't do this on the F-150. 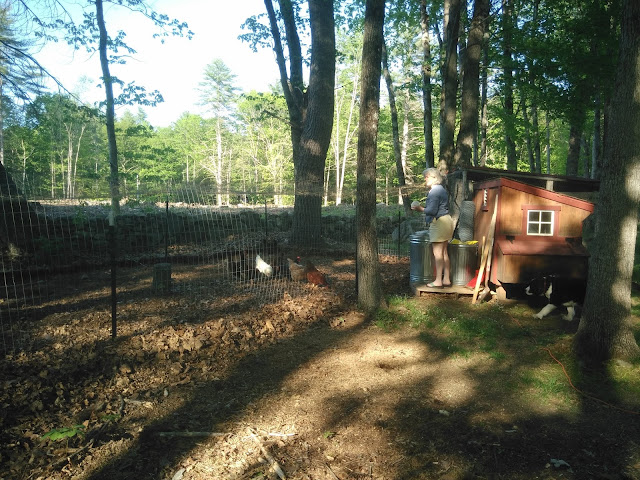 My mum, who has adopted my chickens as her own, encapsulated the larger run I built with bird-netting to keep the chickens in and the hawks and owls out. The hens are big fans, and are routinely sunning and taking dust baths in the big run. Zeke didn't cull any of my flock on this trip, despite his best attempt. 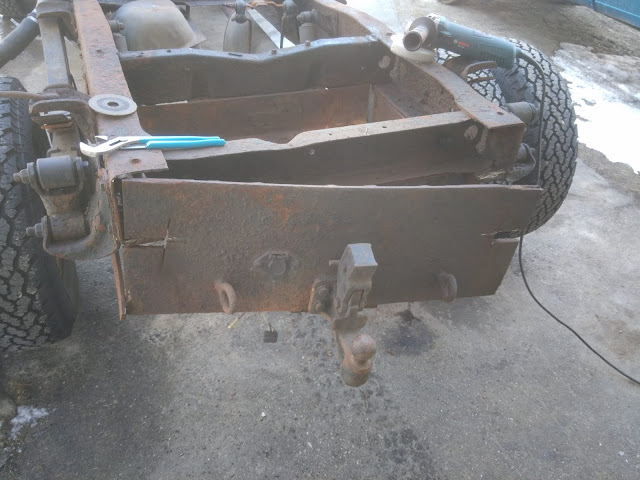 The F350 got a lot of attention on this cool Memorial Day weekend. Above, I had cut the poorly-attached pintle plate off while there was still snow on the ground. It went to the scrapyard. 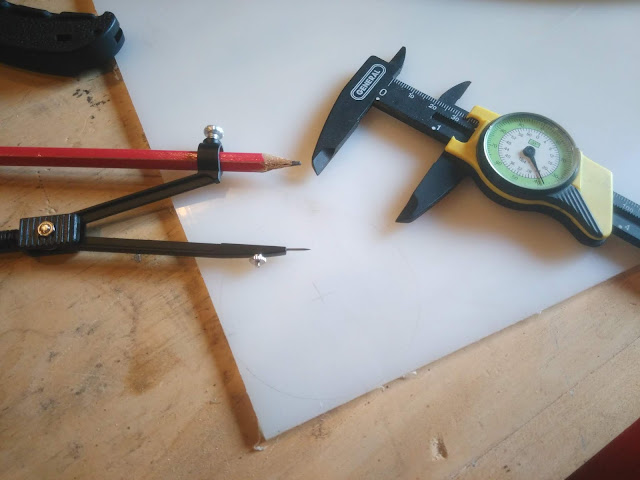 I wasn't able to find a fuel sending unit for the plastic aft tank... so I elected to make my own. Above, I used calipers and compass to draw out a disk in some nylon sheet. 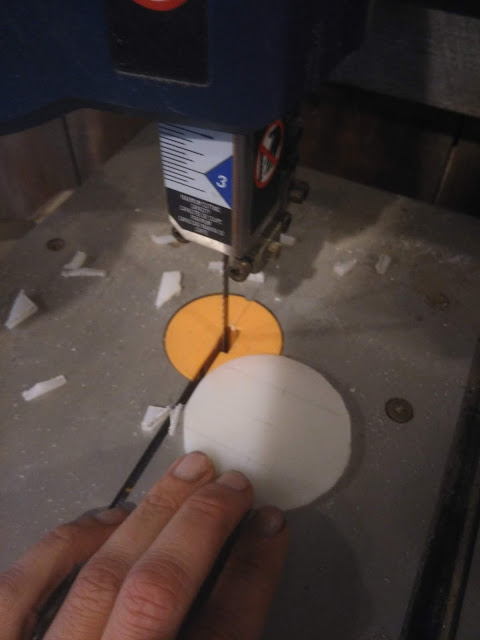 I cut the nylon on the bandsaw, then touched it up with a rotary sander. 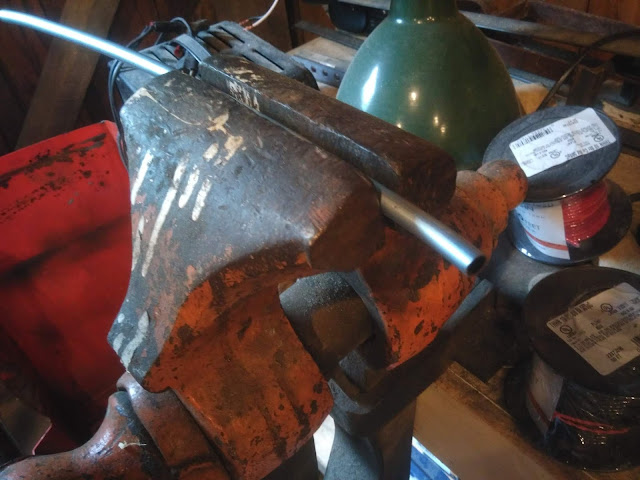 I straightened two pieces of fuel line that came in a spool by gently working them in the jaws of the vise. I drilled two holes in the nylon disk for the lines to go through, and elected to not install the bulky fluid level gauge on my bulky home-made sender. 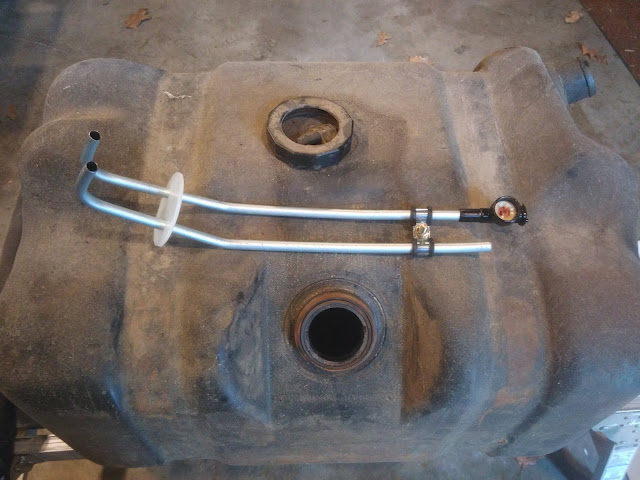 Using a pipe-bender, I put 90 degree and 20 degree bends into the lines so they'd reach the bottom of the tank, and threw an adel clamp on them to keep them from wiggling too much. The supply line has the filter on the end. 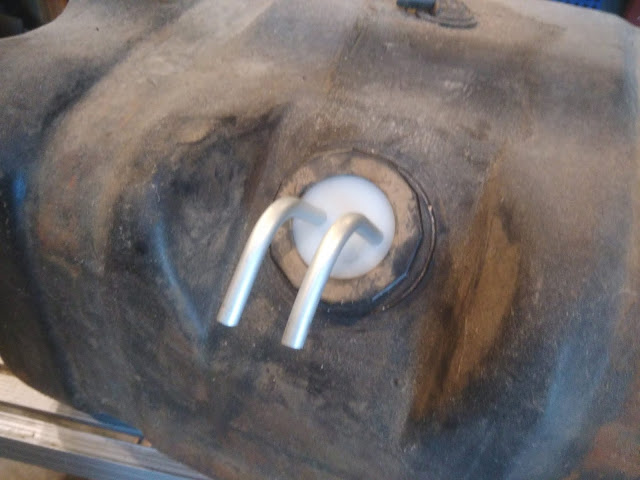 Inserted into the tank. I won't have any full or empty indication, but it can be the straw the truck can suck diesel from. 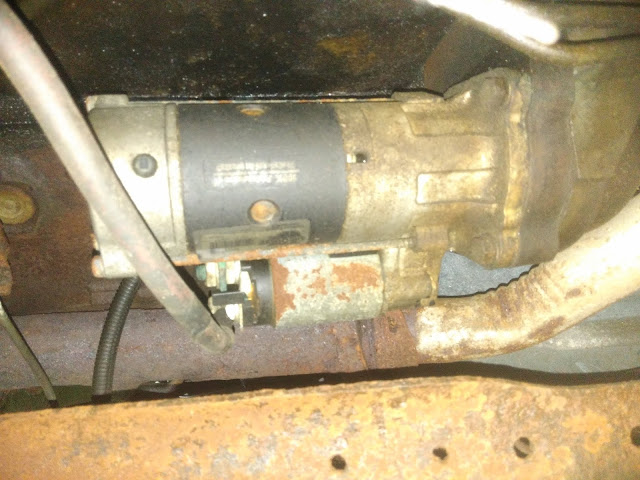 The truck wasn't running yet, mind you. I took the old starter out... 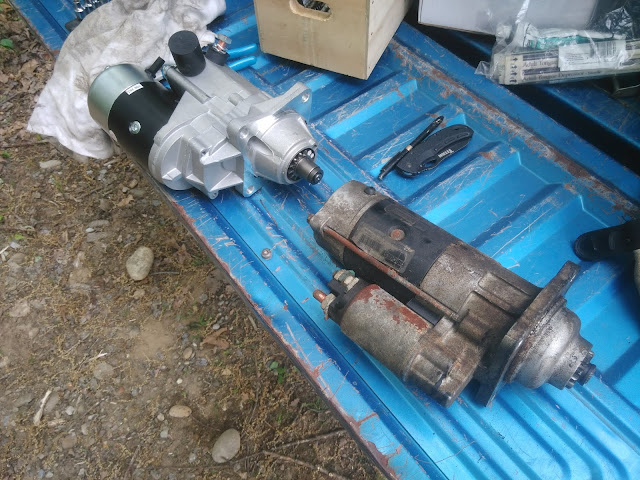 ... and threw a shiny new Japanese gear-reduction starter in. The top-most bolt is a royal pain to get to. Lots of mechanic yoga poses and positive thinking. I also replaced the batteries. After a few 10-second starter cycles, to get fresh fuel up to the motor after the filter change this winter, the truck exploded to life! It only started because I had spent the past hour scouring the internet for bleeding and troubleshooting the 7.3L IDI's fuel system... which was apparently fine. 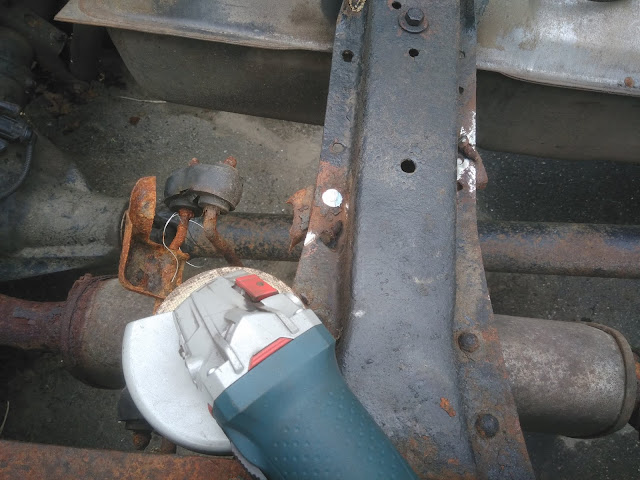 With the truck mobile, I drove it up to the barn. The hanger for the muffler had cracked while plowing, so I took the bolts out with the universal wrench (angle grinder.) 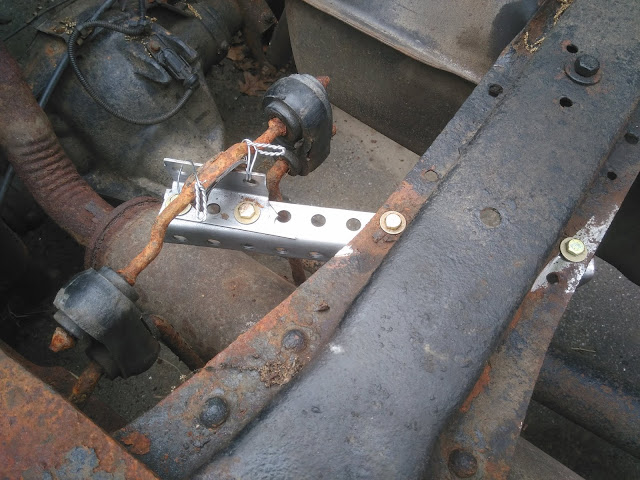 After some more trimming, I fashioned a new bracket with a piece of scrap perforated angle (the leftover piece from making all the bus's solar panel mounts) loose hardware, and some fencing wire. The rubber doughnut at the end of the exhaust pipe was also replaced. Better than it was! 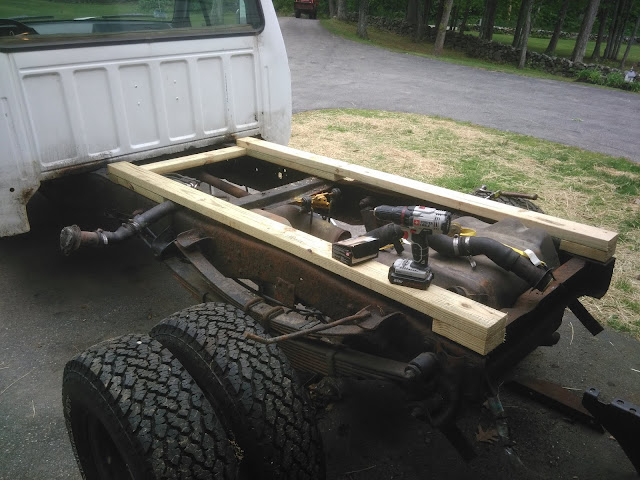 I went on a run to Lowes to get 3 8' 2x4's, in order to build a platform for the flatbed. The frame isn't quite flat; it has a high point just above the rear axle. A 2x4 is almost perfect for making an even surface on this truck. I screwed the frame together with decking screws. This is when I found that plumbing the filler neck into the aft tank, which I had spent all morning repairing, would be a huge pain... so I zip-tied a bag over the fillport. I still have one tank. I gave up very easily... someday I will have two tanks. Today was not that day.

You can see the corner of a Class V hitch on the bottom right. I ordered the wrong part... that hitch is for a 37" regular pickup frame. I have the narrower 34" cab and chassis frame. Back to the internet, then. 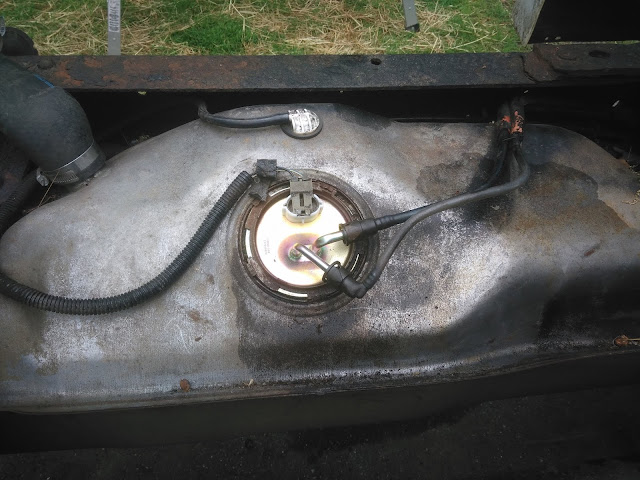 That one good tank even indicates fuel accurately, now, with a shiny new fuel sending unit. 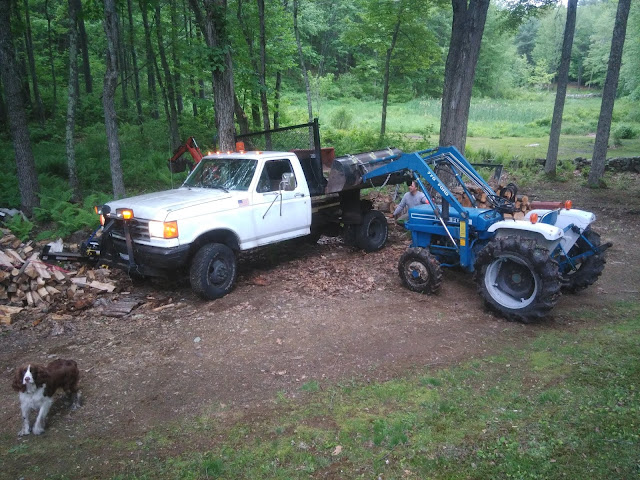 Remember last post's tractor ballet, used to load a junk trailer onto a trailer of junk? Dad and I tried it again with a decent truck bed and a decent truck... on a slope... on uneven terrain. 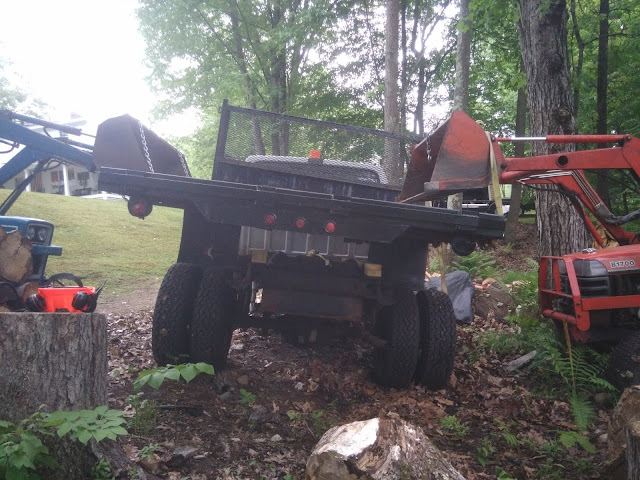 We're kind of professionals at this. Some may say, mistakenly, that this is a redneck operation: but I doubt most redneck operations have a pre-briefed safety plan, risk management, and common hand and arm signals. This is actually an exercise in yankee ingenuity. 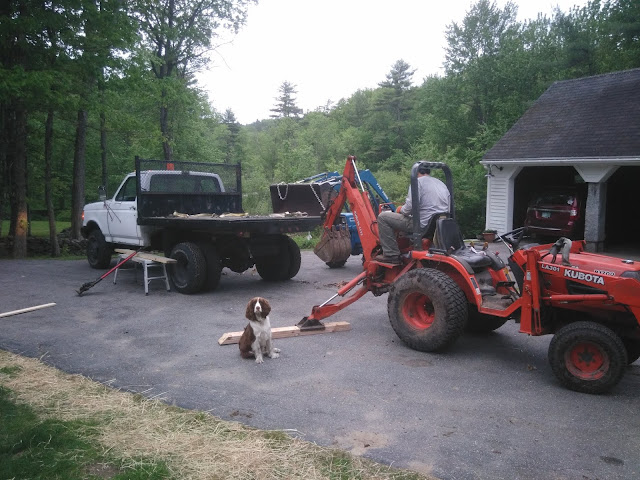 We got the bed on, and drove it up to a more level spot to make the fine adjustments with the backhoe and the farm jack. A ratchet strap is holding it in place until I can get some U-bolts made up this week. After that, I'd like to see if this will pass an inspection and get a sticker. 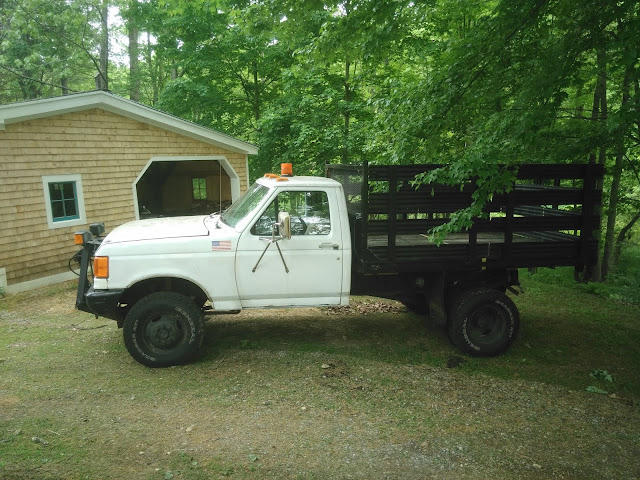 Notice I never installed the dump hoist? There was a reason for that. Maybe next truck.
Posted by Aaron at May 28, 2018