Zeke and I spent a much-needed cool morning up at the bus. The fall foliage is past peak on the land, and the wind has taken most of the leaves from the trees on the edge of the pastures. The goldenrod, which was bright yellow at last visit, is now brown and dropping seeds.

Hopping out of the truck after a foggy drive North, we opened up the bus. I grabbed my water bottle and rifle (I haven't forgotten about that bear!) and we set off through the woods. Most all the leaves are down, really opening up the space. We checked a few spots to see if they were still wet, or if they're just seasonally damp spots. The stream was down a bit. Not much wildlife, though we did see a bald eagle soaring above us. 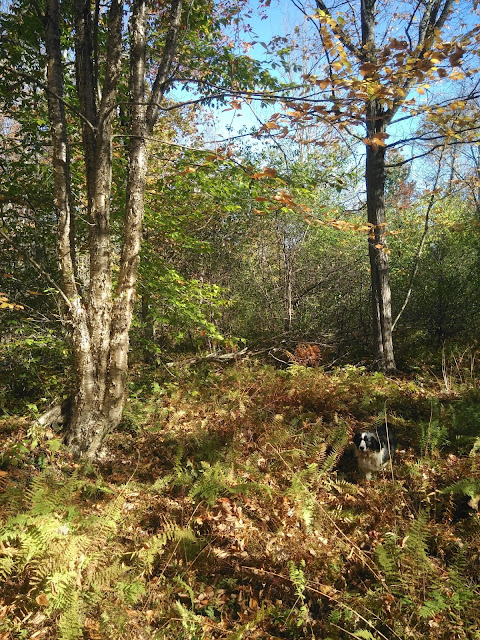 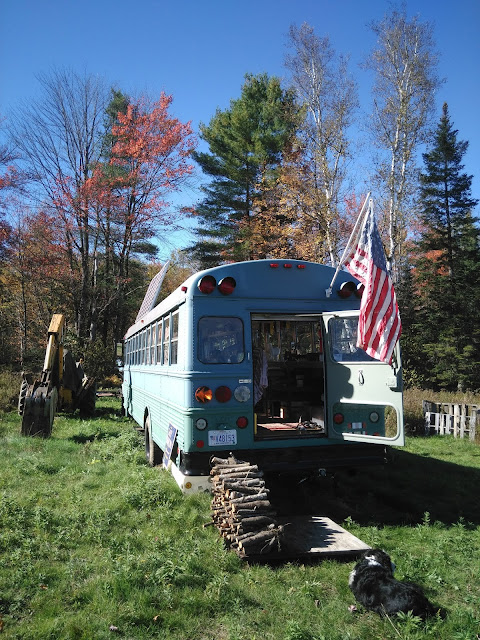 Made a new firewood pile at the back door, where these oak limbs can catch some sun. I'd like to get some clear plastic sheet to keep the water off of the firewood stacks. 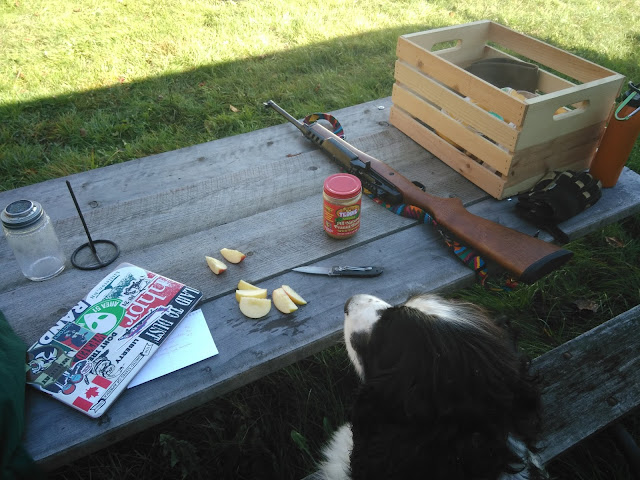 Today's tasks mostly revolved around winter and angles. The first project was the solar panels. I climbed up on the bus roof with a wrench, a small level, and a speed square to change the angles. Two bolts hold the mount to the perforated angled rail; I removed these, brought the panels up to a higher angle... and realized I didn't know what angle I was setting them too! 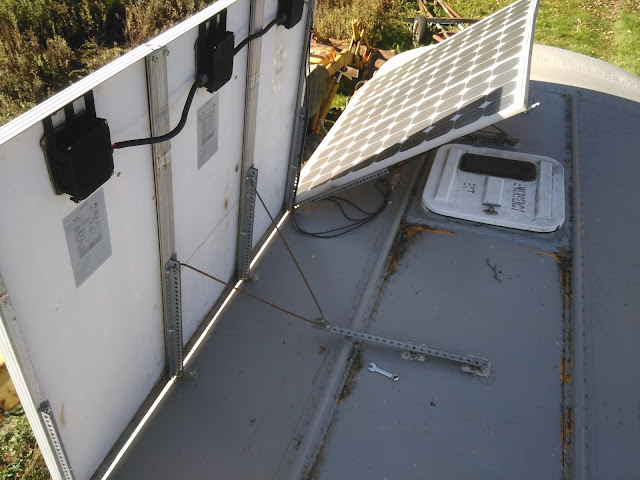 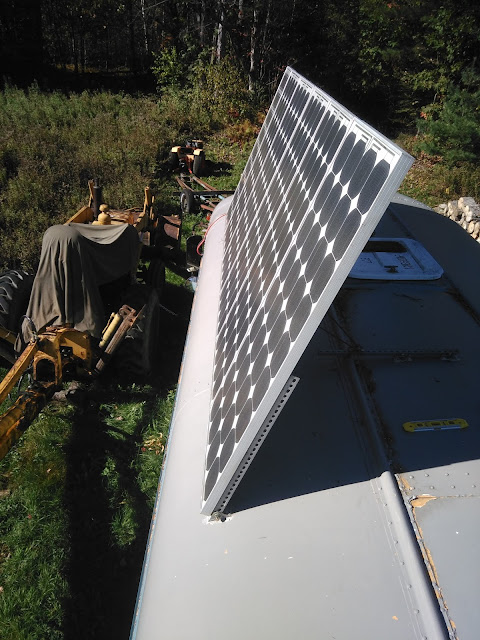 I whipped out the phone, searched for this blog, found the post where I talked about the panels, and found my answer; line of latitude plus axial tilt of the Earth. So I needed these panels to be ~68 degrees from horizontal. Putting them five holes back from the furthest "up" position gave me 67 degrees. I threw the bolts back in, and snugged the nuts down. With this adjustment, the panels will receive more sunlight over the next six months as the sun travels on a lower arc around the southern horizon. Some call this winter.

Next I took a 4x4 post, a square, and my long level, and started measuring the ground. I want to find the average slope of the land, so that over the winter I can work out a barn design to build to. I set the 4x4 on the ground, with the level on top, and raised the downslope end of the post until it was level. I measured the elevation with the square. After taking half a dozen samples, I averaged them together, and found that the field around the bus drops off about 5.5' vertically, every 100' horizontally. This is a 5.5% slope, or about 3.15 degrees.

My final project is a very specific guesstimation. I want to know about how far the trees on the southern edge of the fields cast their shadows, and how tall the trees are. To find out how tall my trees are I used my pace count from basic training, and the internet. 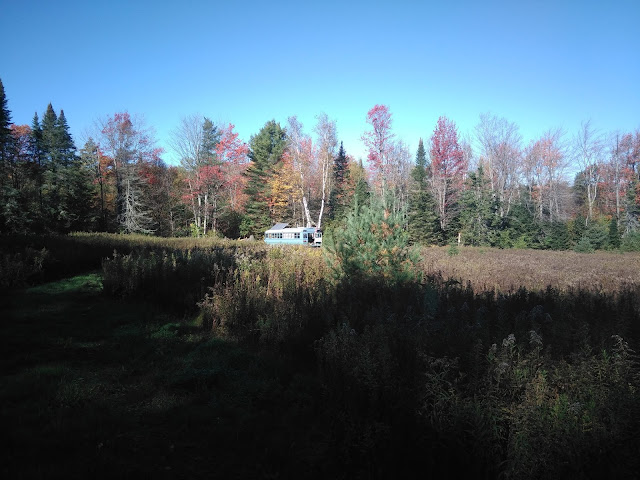 From the base of the trees, I paced 75' to the edge of shadows. This was at 11:50am, 13 October 2017, at latitude 44.3 degrees North, 71.8 degrees West. I plugged this information in at a calculator found after a quick Google search; Sustainable by Design's solar angle calculator. The angle of the sun was about 37.53 degrees above the horizon.

I drew out a picture, and plugged in what angles I knew. The tree to the field is 90 + 3.15 degrees. The sun coming off the top of the tree is 90 - 37.53 degrees. The distance from the base of the tree is 75'. With these three pieces I can find the other pieces of my triangle. Instead of doing it out by hand and cell phone, I found another calculator through a Google search, triangle-calculator.com.

I found that my trees are mostly 53' high. I have a few that are around 64' high, but it's mostly hardwoods that won't have light-blocking leaves in winter. After playing with the calculator, and using the 21 degrees of the winter sun, I found that these trees will cast shadows 161' back from their bases at noon on December 21st (winter solstice, when the day is shortest, and the sun is lowest.) So if I want a reliable passive solar house design, I can't have my solar heating design elements in that shadow range, or I need to cut down some trees! 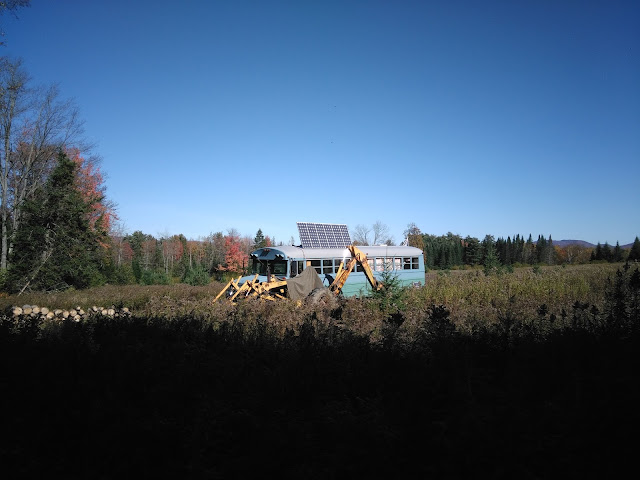 Winterization will likely continue with the next visit. I'd like to add some mortar to the bricks under the fireplace, to keep errant sparks out, and get the side windows all closed up (right now they're all one latch down from the top so heat can escape.) Bus and backhoe started right up today, despite the cool temperatures overnight.
Posted by Aaron at October 13, 2017